It's not just white skeptics undermining the fight for equality. Here's why moderate Black folks are also to blame 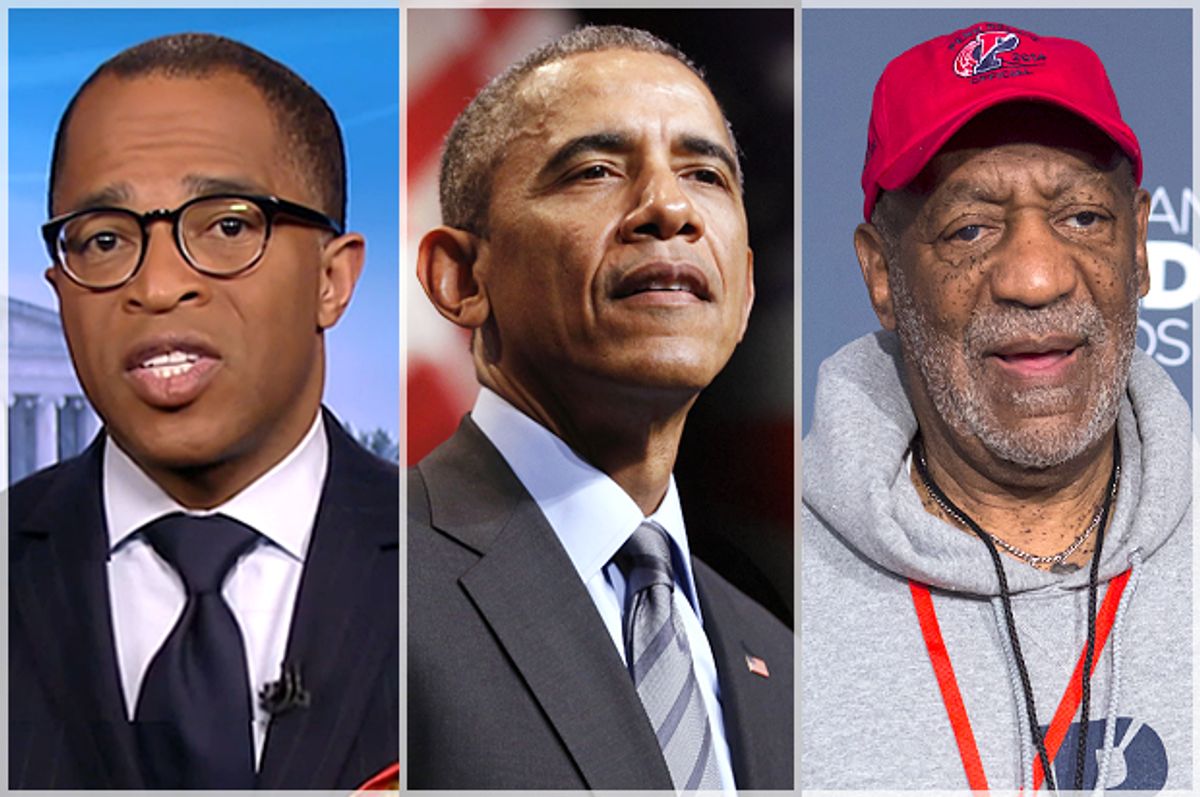 Last week, I had the opportunity to participate in local protests in Madison, Wisconsin, over the killing of Tony Robinson, a 19-year-old unarmed Black teenager killed by a police officer. It was an unusually warm early March day in the city, which encouraged several hundred people and many media outlets to show up for the protests. Despite my fatigue at yet another killing of an unarmed Black youth, I took heart in the sincere rage and unapologetic stance of the people. Their presence at the protests proved wrong all those naysayers who hoped that the burning embers of the Black Lives Matter movement would be extinguished in the harsh cold of winter.

Indeed this movement has its fair share of skeptics, including Black folks quick to declare the movement dead on arrival. When I listen to these people, I can never quite detect whether they are being descriptive or prescriptive, but frequently I’m convinced it’s the latter.

There is also a more insidious kind of participant in the movement, the moderate Black folks, the Respectables, I call them, who still believe that our energies should be spent demonstrating to white people that Black people can be self-critical. One such person is Jonathan Capehart. In a recent column for the Washington Post, Capehart argues, on the heels of the release of the official Department of Justice report on the shooting of Michael Brown, that Brown is an “inappropriate symbol” for this new, burgeoning movement. The DOJ report does ultimately back Wilson’s recounting of events, that Brown reached into his car, punched him, tried to take his gun, ran after being shot, and then turned around and came forward. Thus Capehart concludes that:

“now that black lives matter to everyone it is imperative that we continue marching for and giving voice to those killed in racially charged incidents at the hands of police and others. But we must never allow ourselves to march under the banner of a false narrative on behalf of someone who would otherwise offend our sense of right and wrong. And when we discover that we have, we must acknowledge it, admit our error, and keep on marching.”

I get Capehart’s play. He ostensibly believes in the rightness of the Black Lives Matter movement, and he hopes that if as a Black person, he acknowledges that “we” were wrong in our assumptions about Mike Brown’s innocence, then he, and by extension “we,” will retain the moral high ground upon which the movement is built. Our claims will be more credible to “reasonable” white people, who want to believe us, but can’t because of their innate disposition toward believing that nothing is racist, unless the N-word is used.

Moderate Black people – Barack Obama included – continue to believe that the way to bring white people into the anti-racist fold is by conceding some ground in order to gain more ground. It’s an old debate tactic, but it only works if everyone plays fair. There are two problems with this. First, those with racial privilege generally don’t play fair in racial discussions.  More than that, they play downright dirty, denying the persistence of racism, trotting out erroneous statistics, blaming Black behavior for white racism. The Ferguson Police Department, for example, has conceded nothing even after being found guilty of decades of egregious, consistent and systematic violations of the rights of Ferguson’s Black citizens. Second, Capehart implicitly concedes that it is Black people who must prove that incidents are racially inflected, rather than white people who must prove that they are not. Since we now know for a fact that Darren Wilson policed in a racially hostile city and police department, and since Ferguson residents – Michael Brown included – knew that long before a Justice Department report merely affirmed their experience, it is perfectly reasonable for Black folks to view Ferguson police and police around the country with suspicion. And it is reasonable for Black folks to want clear evidence that this incident was not racial. The DOJ’s own report foregoes such conclusions.

Moreover, though I am absolutely fatigued in my relitigation of the events of Aug. 9, I do want to point to two statements in the DOJ report on the killing of Brown, that Capehart glosses over in his attempt to be undeservedly magnanimous to Darren Wilson. First, the report states that though Wilson, knowing of the incident with the Cigarillos at the convenience store, suspected Brown and his friend Dorian Johnson of the petty crime, when he initially saw them, he told them to “walk on the sidewalk.”

They refused. Having visited Canfield Drive, and seeing the narrowness of the street, I can attest that such a request would have seemed ridiculous and unnecessarily harassing. Coupled with the generally hostile context in which the FPD polices, the resistance from the two teen boys makes sense. Wilson did not approach them and say he wanted to question them about a crime at a convenience store. He approached them and told them to “walk on the sidewalk,” according to the DOJ, or “get the fuck up on the sidewalk,” according to Michael Brown’s friend.

Then the report says that Wilson parked his car at an angle to keep the two young men from walking any further. “Wilson attempted to open the driver’s door of the SUV to exit his vehicle, but as he swung it open, the door came into contact with Brown’s body and either rebounded closed or Brown pushed it closed.”

Then the altercation where Brown allegedly reached into Wilson’s vehicle happened. Now let us lay that aside for a moment, to consider that during this entire time, Wilson has not let these young men know what his business is with them. He rolled up on them and demanded that they get on the sidewalk in a small apartment complex. Beyond that point, the report remains inconclusive on the question of the door making initial contact with Brown’s body. His friend said the officer slammed the door into Brown’s body, while Wilson says the door either rebounded closed or Brown pushed the door closed.

This is not insignificant. If these boys perceived this officer as harassing them about the sidewalk and then slamming a door into Brown’s body, then certainly Brown may have reacted aggressively.

Moreover, there are the pure shenanigans that took place in the grand jury in which the prosecutor used an out-of-date and unconstitutional statute about an officer’s right to shoot a fleeing suspect in his statements to the grand jury. One of those grand jurors later sued because of blatant irregularities in the legal procedure.

But none of this matters in determining Mike Brown’s appropriateness for movement work.

First, Brown doesn't have to be a perfect victim to be deserving of a place in movement history. The Department of Justice would never have investigated the Ferguson Police without Brown being killed and the people rising up in protest.

Second, even if, for the sake of argument, I concede that Brown did everything Wilson said he did (and I’m not conceding any of this, mind you), we must ask why we are outraged at these two young men for not respecting the rule of law in a city where a corrupt police force has exploited and abused its Black residents for decades. Those who take an oath to uphold the law and protect citizens surely are held to a higher standard than two teen boys engaged in youthful mischief.

Three, there is no scenario in which a teenager or any other person should be dead for stealing cigarillos and not walking on the sidewalk. Period. The Black Lives Matter movement is asking us at base level to reject many of the assumptions that undergird our current thinking about how policing takes place in Black and Brown communities. Why are the police trained to shoot-to-kill rather than to shoot to disarm? Why do police use authority and weapons to escalate situations rather than deescalate them? And why, then, are Black men the most frequent casualties of these severe police tactics?

These are not the kinds of questions that can be asked when the victim is a perfect victim.

What, then, is to be gained by arguing that Wilson was justified for shooting a kid who allegedly took some cigarillos? To me, this killing is evidence at best of a piss-poor policing structure.

Moreover, while some witnesses may have been mistaken, all of them were not. Just because Brown had no bullet wounds in his back, does not mean Wilson did not shoot at him as he ran away. The bullet wounds in his forearms very easily could have entered his body while he was running away. The report remains inconclusive on this point, and it is a major point. The report is also inconclusive about whether Brown was in fact charging Wilson. It concludes only that Brown was “coming towards Wilson.”

Michael Brown remains an appropriate symbol of this movement. For one, his acts of resistance and refusal – and I do see them as such – pointed us to a city that balances its budget on the backs of poor Black residents. The police merely act as thuggish enforcers for the racket that constitutes city government.

Beyond that, this movement, before it is all said and done, will force all of us to grow up and stop believing in the myth of our own purity. We must stop believing that our lives only have value, that they are only worthy of protection, when we’ve done everything right. Even though I am no believer in capital punishment, we do have an understanding in this country that capital punishment is reserved for capital crimes.

If Michael and Dorian were two white teenagers, it would be easier for us to look at the adult and the person with more power in this situation – Darren Wilson – and hold him responsible for escalating a conflict and devastating a community over a pack of cigarettes.

In his desire to placate white folks and appear reasonable, Jonathan Capehart lets Wilson off the hook. The implication of Capehart’s argument is that Michael Brown is an acceptable, justifiable casualty in this decades-long police war on a small Midwestern community. But if you believe that All Black lives matter, that is an unconscionable conclusion, one that “offends my sense of right and wrong.” As “respectable” Blacks are wont to do, the Capeharts of the world need to believe that if Black people would just “act right” and “do right,” we would be all right. But in a system of white supremacy, there isn’t that much act right in the world.

Jonathan, surely you know a suit and tie won’t protect you. So we’re going to keep on marching, as you said. And we will keep holding aloft the banner of Michael Brown. We will do so, because Black folks have already tested out your theory of respectability. We’ve been trying to save our lives by dressing right, talking right and never, ever fucking up since about 1877. That shit has not worked.

In an ideal world of crime and punishment, the officer would have had the legal leeway and good sense to pick these boys up, take them back down to the convenience store, make them apologize and work out an arrangement to work off the cigarillos they stole. That is one example of restorative justice and of the world we are fighting for. We are trying to get free, and that means we bring everybody with us, whether your suit is tailored or your pants sag. When the revolution comes, we will leave no one behind.