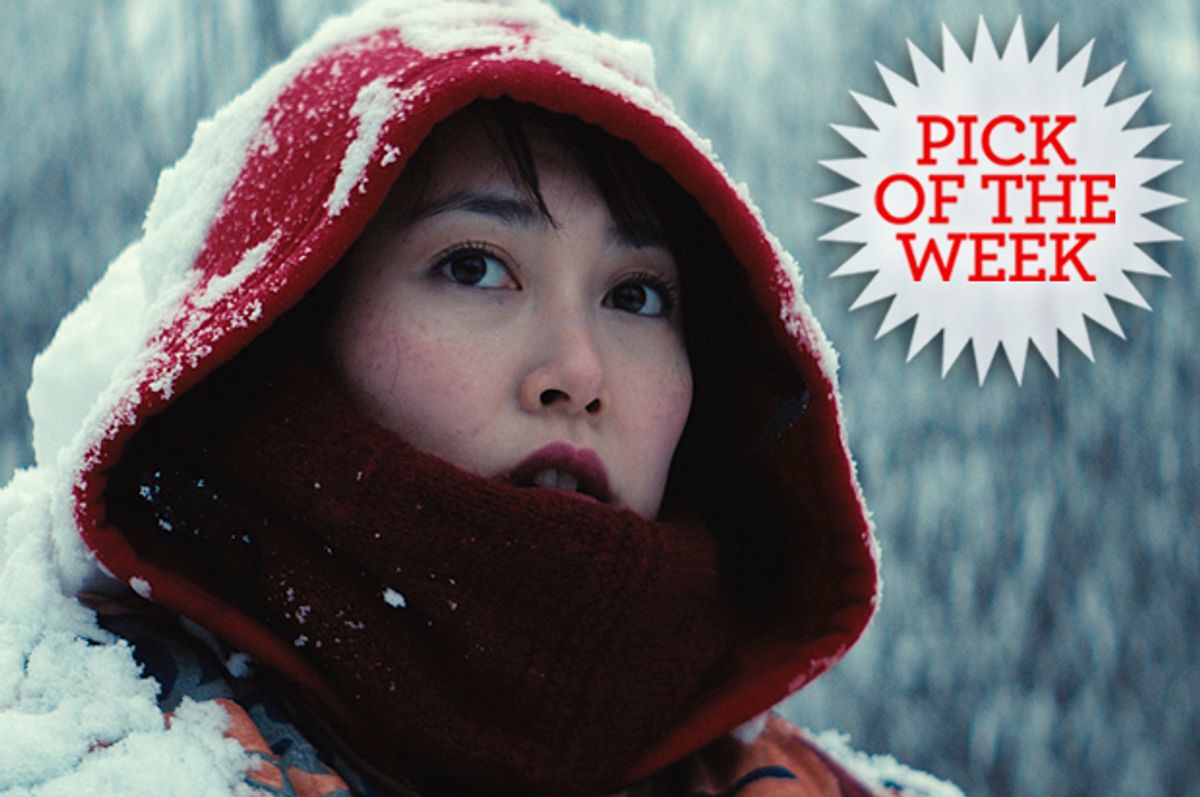 Let’s begin by imagining a whimsical indie film about the nutty Japanese obsession with pop-culture ephemera, focused on a lonely but indomitable woman who becomes fixated on the details of “Fargo,” the Coen brothers movie from 1996. Sounds wistful and sweet and full of small moments of meaning and ultimately kind of minor, am I right? Well, “Kumiko, the Treasure Hunter” is not that movie. I mean, it’s somewhat that movie, and its comical array of minor characters – many of whom would fit right alongside Frances McDormand’s iconic Sheriff Marge Gunderson in “Fargo” – keep good-naturedly trying to turn it into that movie. But its eponymous protagonist, an embittered Tokyo office worker played by Rinko Kikuchi, has embarked on a different and much darker trajectory and will not be swayed. Neither will the filmmaking team of David and Nathan Zellner, who have channeled Kumiko’s visionary madness into a memorable, haunting and highly original American movie.

Unless you’ve been hanging out at film festivals or have done time amid the vibrant indie scene of Austin, Texas, you probably haven't encountered the peculiar genius of the Zellner brothers before. “Kumiko, the Treasure Hunter” may seem like a small film, but by Zellner standards it’s pretty much “Jaws.” There’s nothing shaggy or amateurish about their distinctive aesthetic or the startling cinematic craft on display in “Kumiko,” which have been honed by years of work in near-total obscurity. David Zellner (who writes and directs) and his younger brother Nathan (who produces, and co-wrote this one) have made two previous micro-budget features (“Kid-Thing” in 2012 and “Goliath” in 2008), along with a couple of earlier films that were never distributed and numerous shorts and videos. They’ve also chipped in on other people’s movies: You’ll encounter David Zellner’s balding, mild-mannered persona put to good use, for instance, in David Lowery’s “Ain’t Them Bodies Saints,” Andrew Bujalski’s “Beeswax” and the Duplass brothers’ “Baghead.”

I’m sure it has never been lost on the Zellners that as a sibling duo of Middle American DIY movie obsessives with film-school chops and a droll and twisted sense of humor, they have long labored in the deep shadow cast by Joel and Ethan Coen. We could take the benevolent view that “Kumiko, the Treasure Hunter” is a loving tribute to “Fargo” and its creators, or it could be construed as a vicious parody or hostile parasite, seeking to suck out the older movie’s soul and turn it to sinister purposes. The opening shot of “Kumiko” is, in fact, a distorted copy of the first frames of “Fargo” – the on-screen text claiming that this is a true story, rendered illegible in the grainy, static-ridden images of an old VHS tape.

We see a few fragmentary scenes from “Fargo,” as Kumiko watches them over and over again – this is apparently the fair-use doctrine at work, since the Coens are never mentioned in the credits. But those images have been stripped of all meaning and context (not to mention dubbed into Japanese), and in any case Kumiko is dead-set on misinterpreting them. Played by Kikuchi (whom you may have seen in Guillermo del Toro’s “Pacific Rim” or Alejandro González Iñárritu’s “Babel”) with a tremendous, near-silent subtlety oddly suggestive of Charlie Chaplin, Kumiko is an unmarried and unhappy office drone who lives alone with her pet rabbit – the unbelievably cute Netherland Dwarf named Bunzo, who pretty much steals the show. She is also gradually decoupling from reality, and has convinced herself to take the faint premise that “Fargo” is nonfiction at face value, and to follow that deranged logic to the idea that the suitcase full of money that Steve Buscemi’s doomed character buries in the snow must still be there. (Did I just spoil “Fargo” for you? I am deeply sorry. By the way, Bruce Willis is dead the whole time in that other movie, and Rosebud is the name of the guy’s sled.)

Kumiko is like a Spanish conquistador, as she tells the baffled security guard who busts her for trying to steal a North American atlas from the public library. She has unearthed the clues leading to a legendary treasure hidden in the Americas, and all she needs now is a map to guide her. She knows better than to use this analogy on the bewildered natives of the New World, even when they’re trying to be helpful. Much later (once she's gotten hold of that map), Kumiko shows her copy of “Fargo” to an affable small-town cop in Minnesota, who has discovered her wrapped in a stolen hotel blanket and cowering behind a statue of Babe the Blue Ox. (It’s director David Zellner, essentially playing one of Marge Gunderson’s dimmer deputies.) She avoids comparing herself to Cortés or de Soto, and he tries to explain the nature of her error, without success: “It’s not real, like a documentary or reality TV. It’s just a normal movie. It’s fake.”

“Fargo” may or may not be a “normal movie” – a coded insult if I’ve ever heard one – but “Kumiko, the Treasure Hunter” definitely isn’t. Nothing I’ve written so far can quite prepare you for the hypnotic visual and auditory spell cast by this movie, with its stark cinematography by Sean Porter and the mind-altering score by the Austin band called the Octopus Project. The Zellners blend seemingly opposing currents of eccentric, character-based comedy and psychological horror film into a disorienting mixture whose precise flavor remains elusive but is never predictable.

Kumiko first comes upon her VHS copy of “Fargo,” for instance, in a dreamlike beach episode that suggests an entirely different kind of movie, one driven by surrealism, symbolism and chains of subliminal association. If you want to dig up the film-school references, “Kumiko” arguably has less in common with “Fargo” than with seemingly outrageous comparisons like Roman Polanski’s “Repulsion” or Pablo Larraín’s “Tony Manero,” or maybe even Erich von Stroheim’s “Greed.” (If Kumiko had found a copy of Tarkovsky’s “Solaris” instead of “Fargo,” she might have understood the nature of her own problem.) If there’s a Coen brothers antecedent in the mix here, it would be “Barton Fink.”

But none of those movies, memorable as they are, feature a ramen-eating bunny, a natural screen performer who figures in one of the most hilarious and heartbreaking shots in motion-picture history. (You needn’t worry: Bunzo is fine, no actual rabbits were harmed, etc.) I’m not saying that, after its own fashion, “Kumiko, the Treasure Hunter” isn’t a wry and delightful tribute to the resilience of the human spirit and all that. But it’s also a deceptive, contradictory, barbed work of considerable formal audacity and artistic ambition. Which, I know, is pretty much the kiss of death these days. The Zellners emerge from Texas beaming like innocents and bearing a sweet and colorful cocktail, but it's been spiked with a dark essence distilled from underground sources. It tastes delicious, but strange visions may follow.