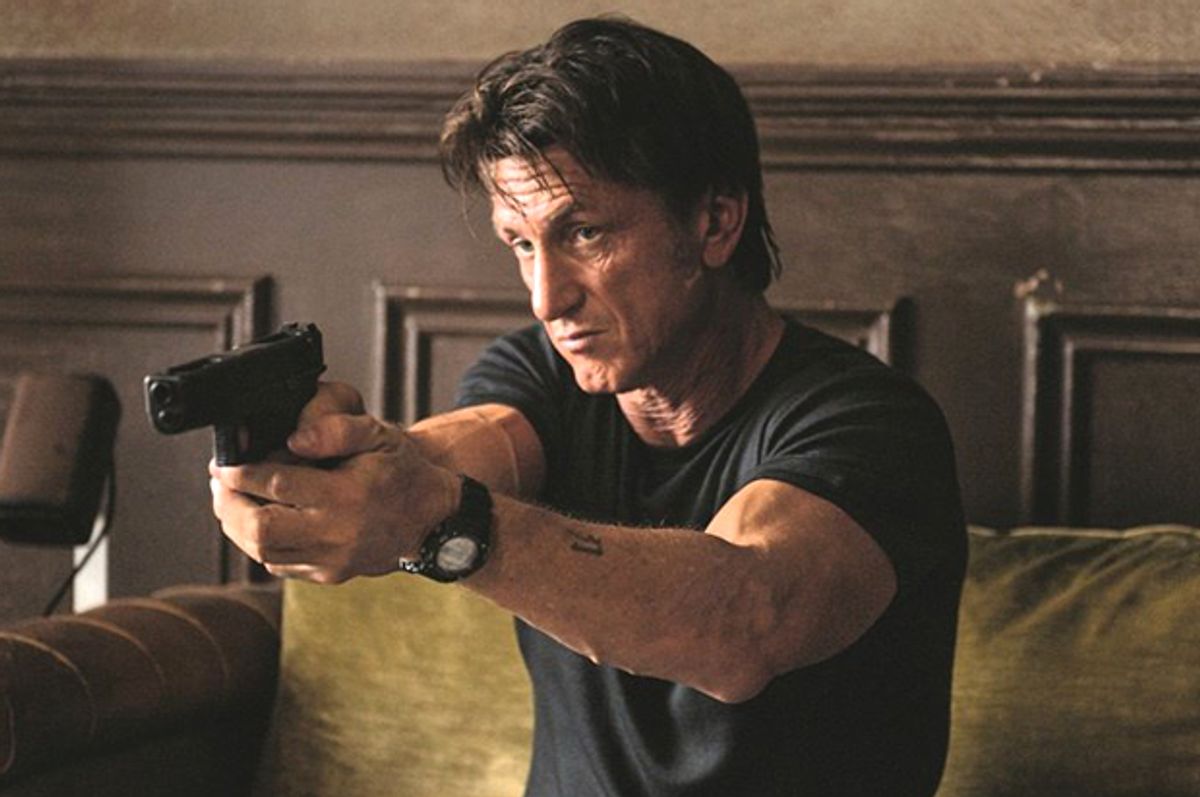 Maybe the best way to summarize “The Gunman” is that it’s a terrible idea, a fatal morass of meretricious values and bogus sentimentality, which is executed really, really well. It’s a globetrotting action-espionage thriller in the “Bourne Identity” vein, shot in Africa, Barcelona, London and the bowels of an aquarium in Gibraltar (although to my great disappointment no one is thrown into the shark tank) and directed by Pierre Morel, a Luc Besson protégé who made the first “Taken” movie in 2008. It appears to have been constructed as a star vehicle for Sean Penn, who is one of its producers. Without disputing either Penn’s filmmaking clout or his acting prowess, this is a really weird choice even by his standards. Here we have a 54-year-old, two-time Oscar winner, a consummate actor’s actor who has played all kinds of parts in all kinds of films, trying to blaze a new path as the second coming of Jason Statham or Vin Diesel.

But I’ll be damned if Penn doesn’t pull it off, although I’m not sure the public is lining up to see the guy who played Harvey Milk transformed into a hard-body CIA assassin seeking redemption. (Do I sense a mashup in the making?) I genuinely don’t want to know what kind of terrifying pharmaceutical and/or bodybuilding regimen was involved in reshaping Penn’s physique for this role as a reformed black-ops spook named Jim Terrier -- but OMG people! With his clothes on, the Penn of 2015 looks like a dead ringer for longtime NBA coach Pat Riley. But when he doffs the shirt, dude is ripped. There’s a level of narrative confusion here that I guess befits a movie whose worldview and politics are so thoroughly addled: On one hand, Terrier is supposed to be a battered, haunted killer suffering from memory loss and possible dementia after multiple head injuries; on the other, he’s an indestructible ass-kicking machine who repeatedly takes on teams of Special Forces-type guys and rips them apart.

I’ve pretty much always enjoyed watching Penn in everything, not despite of his hambone tendency to milk every moment of every shot but because of it. This stupid movie is no exception, and in the intervals between killings and explosions, Penn brings such carved-stone gravity and depth of sadness to Jim that you almost believe his penitent-Christ shtick will atone for all the greed of capitalism and all the crimes of imperialism. As far as I’m concerned, Penn’s erratic personal life, political grandstanding and undisguised loathing of the media come with the package; he’s one of the last people left in Hollywood who embraces the full Brando tradition of stardom as a job that demands endless egotism and blatant obnoxiousness, and who can back it up with actual talent.

Making a Eurotrash eye-candy action thriller at Penn’s age was total folly, no doubt, but I honor the perversity and arrogance of the impulse. Sure, he could be doing Eugene O’Neill on stage or working with the Coens or doing weird European movies or whatever. (And he has: Bizarre and almost unwatchable as Paolo Sorrentino’s “This Must Be the Place” is, Penn is unforgettable as an aging Goth-rock idol turned Nazi-hunter, apparently modeled on Robert Smith of the Cure.) But why settle for delicacy and quality when the brass ring of vainglory is out there longing to be grasped? At the screening of “The Gunman” I attended, several people were openly laughing at the movie’s grandiose, sub-Hemingway macho-fantasy symbolism, its woozy blend of hot girls, hot cars and “white people in hot weather” locations. My reaction was different: This movie is like drinking tequila for two hours. The first hour feels like the most fun you’ve ever had, and then the second hour undoes that feeling and then some, leaving you empty, repentant and throbbing in pain on a concrete floor.

You could use “The Gunman” in film-studies courses to illustrate the value of the auteur theory (meaning the idea that the director is the primary author of a film), if only in a negative sense. It’s clearly a directorial accomplishment to assemble this level of acting talent in one movie and come away with something so – well, “bad” is not sufficient to capture the idiot glory of this motion picture. Something so sugarcoated and faux-meaningful and fraught with condescension and free of actual brain activity. Furthermore, although “The Gunman” is in English and was largely shot in Spain and Britain, Morel infuses it with a blend of grandeur and stupidity and exemplary artisanship that feels essentially French, the same spirit embodied (with less pretense of social conscience) in the Palace of Versailles.

While Penn is certainly the star, this movie is an embarrassment of middle-aged masculine riches. Javier Bardem plays a drink-sodden, duplicitous ex-colleague with bad clothes and a beautiful wife, and Idris Elba plays to type as an upright Interpol agent. So we’ve got three of the most charismatic leading men of our age squaring off against each other, before we even get to Mark Rylance and Ray Winstone, two of the greatest living British actors (in completely different registers), as a pair of wised-up codgers who find themselves on opposite sides of the great spy-agency killing spree.

Women – wait, what are those again? Some sort of decorative element, right? Basically the only one here is Italian actress Jasmine Trinca, as the hot NGO aid-worker-type person whom Jim ditches in the Congo, circa 2006, after one of his egregious “assignments” provokes an international crisis. Years pass, and she marries Bardem’s El Corrupto character for his irresistible combo of ill-gotten money, alcoholism and self-hatred. But if you think she has forgotten the hot American spy who lied to her, dumped her and plunged Central Africa into chaos by killing on behalf of evil corporations, you would be wrong. Jim shows up in Barcelona, on the run from the usual shadowy conspiracy required by movies like this, and she absolutely cannot wait to jump on top of him, steal a cool ‘60s roadster and head out on an impulsive road trip that ends in abduction and torture. And a bullfight. Since we’re in Spain, the action climax occurs at a bullfight.

It may frame this bizarre, inexcusable and occasionally delicious spectacle somewhat more clearly to observe that “The Gunman” is adapted from a 1981 novel by the legendary French crime writer Jean-Patrick Manchette, a onetime ‘60s leftist shaped by existentialism and the noir aesthetic. I’ve never read the book, but I’d be willing to bet that the aura of dated machismo is imported intact but that screenwriters Don MacPherson and Pete Travis have forcibly tried to twist a narrative of decay and decline into a conventional movie fable of heroism triumphant and order restored. The result is an unexpectedly dark and downbeat thriller that retreats from all its most mordant observations about the uses of power and violence into one of the most obviously fake happy endings ever stapled onto a motion picture. This is a movie that cannot remember that its central character suffers from brain damage and dementia. No doubt that’s a metaphor for something, but the disorder is contagious so I’m not sure what.