The "Patient Zero" of humiliation gives a much needed reality check 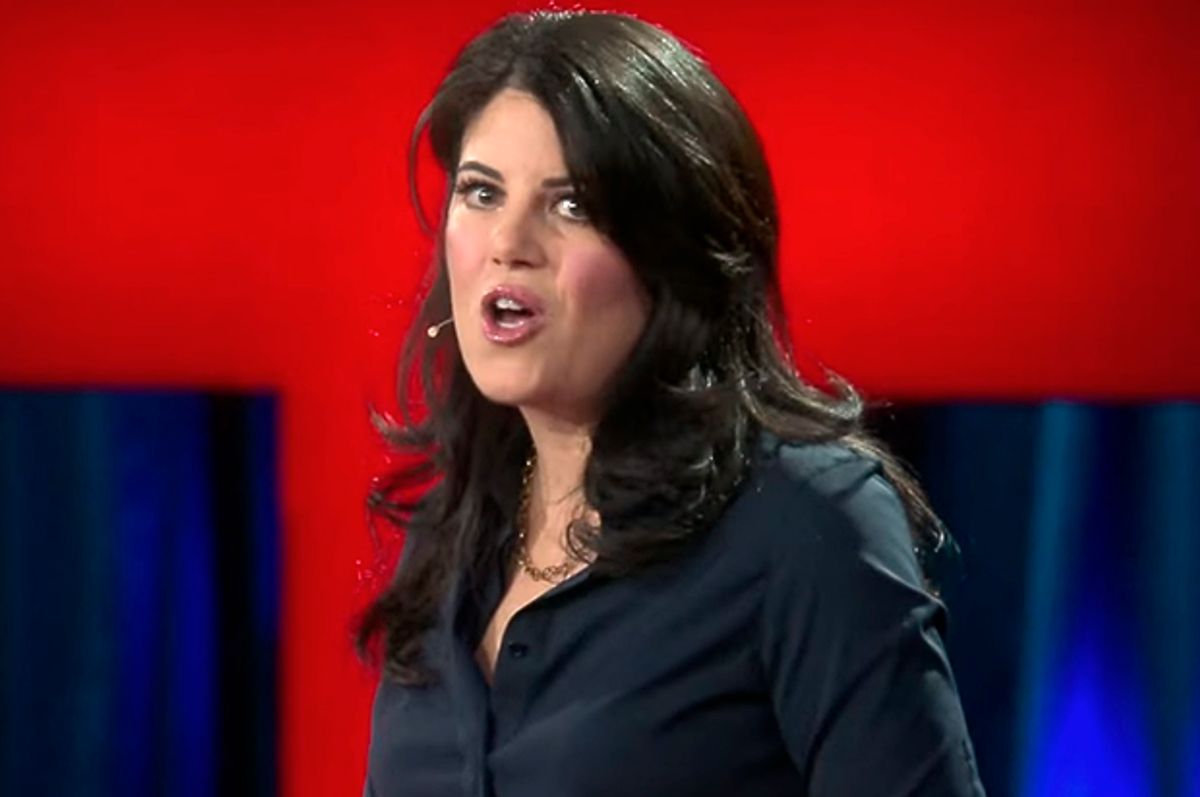 An individual whose most defining moment came as an intern, and nearly twenty years ago, might not at first sound like a likely candidate for a TED talk. But then again, Monica Lewinsky's White House internship turned out to be one for the history books.

Speaking at TED2015 this week, the woman whose ill-starred fling with the president of the United States threw the government and the media into chaos in the late nineties restated many of the same ideas she expressed at the Forbes’ 30 Under 30 Summit in October. As she did back then, she described herself as a woman who, at a young age, "fell in love with my boss." And what happened next, she says, had "devastating consequences.... I lost my reputation and my dignity."

"Now I admit I made mistakes," she told the Vancouver TED audience, "especially wearing that beret. But the attention and judgment that I received — not the story, but that I personally received — was unprecedented. I was branded as a tramp, tart, slut, whore, bimbo and, of course, 'that woman.' I was known by many, but actually known by few. I get it. It was easy to forget 'that woman’' was dimensional and had a soul."

Lewinsky has spent much of the past year steadily building her personal brand as a voice against cyberbullying – beginning with a candid Vanity Fair essay about what it felt like to be "the first person whose global humiliation was driven by the Internet," and continuing with her self-appointed role as the "Patient Zero" of online abuse. Last month, she spoke to a group of high school and college aged girls after the staging of a play called "Slut," and spoke to the audience about "standing up against the sexual scapegoating of women and girls."

Words like "shame" and "humiliation" are not ones most of us would willingly use to describe our life experiences, but Lewinsky says she was motivated by the 2010 suicide of gay Rutgers student Tyler Clementi to become what she calls an "upstander" instead of a bystander in a culture of public mortification. "I began to look at the world of humiliation and bullying around me and see something different," she says, "Every day online, people — especially young people who are not developmentally equipped to handle this — are so abused and humiliated that they can’t imagine living to the next day."

The world is, in many ways, an even harsher place than it was back at the height of the Starr Report era, when the toxic culture of turning people into punchlines was still driven by pseudo professionals like Drudge. Now, anyone with a Twitter account can tell a woman directly what an ugly whore she is, as Ashley Judd revealed this week in her own public battle with the bullies. A look at Lewinsky's Thursday tweet saying, "WHEW! ...so what did you do today?... thanks to all for the kind supportive comments" reveals both positive responses and, unsurprisingly, cigar references and a declaration from one man that "I wanna f__k you like an animal."

At 41, Monica Lewinsky is still living down the poor choices she made – choices she admits she made and apologizes for – when was 22. She will be forever defined by those choices. She is still right now, this moment, actively getting crap online from people who believe that they are entitled to verbally abuse her because of her sexual history. And while I'd wager that relatively few of us, even those of us who were young in the nineties, have ever messed around with an acting president, all of us have done things we deeply regret. That knowledge should be what fuels our compassion and our empathy, not a brutal culture of baseless moral superiority. As Lewinsky says, "A marketplace has emerged where public humiliation is a commodity and shame is an industry," and with it comes "a dangerous cycle: the more we click on this kind of gossip, the more numb we get to the human lives behind it."

There is a saying that the person who's never made a mistake has never made anything. So when you look at Monica Lewinsky now, you have a choice. You can see her as her critics forever will, as simply the sum of her mistakes. You can sniggeringly make fun of her for engaging in activities that most sexually active adults have done at one time or another. Or you can see someone who's trying to take her mistakes and make something out of them, a person who has unique authority to tell others with confidence, "Anyone who is suffering from shame and public humiliation needs to know one thing: you can survive it." You can consider, the next time you feel like clicking on some vicious snark, her plea for empathy, and her advice to instead "Just imagine walking a mile in someone else’s headline."