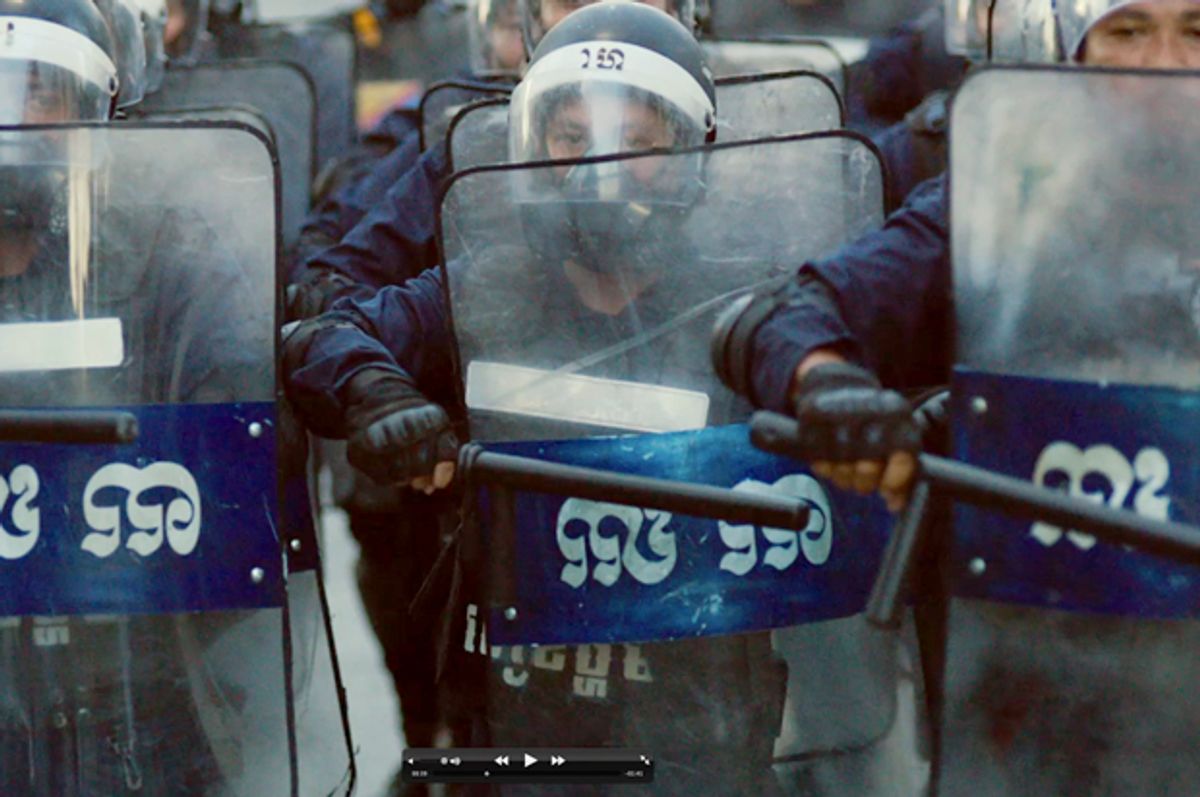 Still from "No Escape" (The Weinstein Company)
--

“Welcome to Asia,” says a grubby, Hawaiian-shirted Pierce Brosnan at the beginning of the recently released trailer for writer/director John Erick Dowdle’s latest film, "No Escape."

"No Escape," which falls nicely in line with Dowdle’s modus operandi (tales of people getting trapped in places), is his biggest effort yet. But this time, the people aren’t stuck in an elevator inhabited by the devil, or a building quarantined by the CDC, or a Parisian catacomb full of corpses. They’re trapped in, well, Asia. A made-up Southeast Asian country with a made-up language, to be more precise.

What to me was a problematic and complex -- yet mostly peaceful -- political situation was to family and friends back in America a scary, faraway crisis; I wondered how the film's writers would fill in the blanks. As it turns out, the studio's last-minute decision to change the title of the film from "The Coup" to "No Escape" was rather telling.

As the trailer begins, ominous music subverts a string of innocuous and familiar images of daily life in Chiang Mai -- a group of monks sitting in front of an ornate Buddhist temple, traditional Lanna dancers dressed in silk and flowers, a Thai family sitting on a sidewalk.

“What if we don’t like it here?” asks Owen Wilson’s young daughter from an airplane seat.

We know this for sure about 10 seconds later, when a group of dark-skinned, unidentified Asian “rebels” decked out in classic third-world terrorist attire, take over the city and start slaughtering everyone in sight.

As one A.V. Club commenter put it, “it's essentially a zombie movie with racist caricatures of Southeast Asian people instead of zombies.”

The rebels arrive like a brick wall and spend most of their time chasing down white people and blowing things up, yet not one Asian person earns so much as a subtitle throughout the duration of the trailer. Meanwhile, the various white people have time to utter about half a dozen different iterations of “we gotta go home!”

Of course, there is no mention of what will happen to the millions of native inhabitants of this fictitious Southeast Asian country, being brutalized in the background, as we watch a white man shot point blank in the fore. For them, this is home. For them, there really is no escape. But this is not about them. And in narratives like this, it never really is.

The film has not yet been released, so I’d like to hope that some major plot twist not alluded to in the trailer could still emerge. But what we’ve seen so far -- and, as studios spend millions of dollars marketing these films, what we've seen so far is not insignificant -- suggests that "No Escape" is simply the latest addition to a long line of American films catering to and profiting off of America’s xenophobic sentiments towards the Asian Other.

America’s relationship with Southeast Asia is complicated and dark. As an American expat who has lived here for the past three years, even brief trips to neighboring countries have revealed to me the often devastating results of U.S. foreign policy. I’ve met Laotians missing limbs from the decades-old American cluster bombs that litter their country’s soil. I’ve met Cambodians missing relatives because they were slaughtered, along with at least 1.5 million others, during Pol Pot’s brutal genocide, which was secretly spurred and supported by the U.S. government. I’ve roamed around the Phnom Penh Killing Fields in which Cambodian infants were beaten against trees then thrown into pits to die with their families under a haze of American-made DDT. These stories remain largely untold because they’re appalling, embarrassing, and hard to explain within our antiquated American Hero narrative -- the results of monumental missteps stemming from America’s dubious role in the Vietnam War.

It’s not surprising that in this part of the world, people call it the "American War."

This is the Southeast Asia that films like "No Escape" have the power to casually exploit. With a lack of American military victories in the region, and the resulting knowledge vacuum that emerged, it’s easier to make up a fake country, a fake language, a fake event -- one in which we are the victims -- than to face up to our international failures. "No Escape" seems to be a direct descendent of mid-war propaganda films like "The Green Berets," in which Vietnamese people are painted as brutal savages and the ridiculous mess of a war is rewritten and simplified into a clear dichotomy of good and evil.

Even later films that criticized the war -- critical favorites like "Apocalypse Now" and "The Deerhunter," explore only the American perspective, reducing the Vietnamese experience to mere background noise. These films, even with their more nuanced depictions of the conflict, validate nationalistic fears of the unknown, relying on depictions of cold-hearted killers and executioners -- the most negative subtrope of the Inscrutable Oriental stereotype that we’ve been seeing throughout the history to film -- barely-human figures whose stoic Otherness renders them completely incomprehensible.

Upping the ante for 2015, "No Escape" uses ISIS-esque imagery and costuming to bank further on our modern-day fears of terrorism in the Middle East, while conveniently avoiding Islamophobic recrimination by changing the setting to a relatively peaceful, fictionalized place in the land that time forgot.

Thailand, in particular, is something of a dream destination for both tourists and Western filmmakers and has been for decades. It’s beautiful, cheap and eager for tourist dollars (which make up 10-to-20 percent of Thailand’s GDP), profiting off its perceived exoticism and foreigner-friendly reputation as “The Land of Smiles.”

Interestingly, this too traces back to the Vietnam War, during which Thailand was the primary destination for battle-worn U.S. troops seeking R&R (a.k.a., sex and drugs). Supply rose quickly to meet demand, and Bangkok and its once-sleepy beach towns were transformed into hotbeds for prostitution, go-go bars, and an endless supply of intoxicants. This period brought a whole new set of stereotypes to both Thai cities and Thai women, painting them as permissive playgrounds and submissive playthings for white men.

The stereotypes remain today, despite the paternalistic Thai government’s attempts to quell them, and continue to be emphasized and exploited by Hollywood for big bucks at the box office. Perhaps the most recent example is "The Hangover Part II," which grossed $103 million its opening weekend.

As Jeff Yang in his review for SFGate:

The film's depiction of Thailand transforms the "Land of Smiles" into a bizarro realm of brute violence, grim depravity and unfettered libido, populated entirely by broad racial stereotypes: Thuggish gangsters. Wizened monks. Lascivious ladyboys. Not to mention whiz-kid pre-meds, infinitely forgiving lotus-blossom brides and the Father of All Tiger Dads.

Danny Boyle’s 2000 film "The Beach" depicts a similarly heady vision of Thailand through the eyes of its obnoxious young protagonist (a fresh-off-"Titanic" Leonardo DiCaprio), who heads East in search of “something more beautiful, something more exciting, and yes, I admit, something more dangerous.” In shorter order, he links up with a bunch of other white people and settles a “secret” island that happens to already be occupied by Thai marijuana farmers -- menacing, machine gun-wielding marijuana farmers -- who strongly resemble the rebels in "No Escape." Here again, Thailand functions as an “exotic” stage upon which white people can escape their comfortable lives, act out their melodramas, discover things about themselves and their fellow white people, and then go home.

Asian characters, if they exist at all in these films, are again one-dimensional stereotypes, usually without subtitles and therefore voiceless. They function as props, meant to set the scene, stand in for a joke, conduct violence, or, if they're lucky, assist the white protagonists in learning something about themselves.

Sometimes, they do all of the above.

Meanwhile, the real and plentiful issues that exist in Southeast Asian societies are appropriated by the dominant foreigners, who become heroes -- often just for escaping their adopted paradise gone wrong -- while those who are tied to this land, those who actually live and work and die here, are left to fend for themselves.

Perhaps these choices are made because white Americans -- as has been demonstrated  in social science literature -- feel less moved by the pain of people of color than by that of fellow whites. Perhaps this explains our tendency to replace real life people of color with more relatable white stand-ins. This could’ve certainly been the case for 2012’s "The Impossible," perhaps the only major motion picture to depict the devastating tsunami that rocked the Southeast Asian coastline in 2004. Of the 227,898 people killed, less than 4 percent of them Western foreigners, and yet the film once again reduces the “locals” to one-dimensional props: the noble savages who save the white people, and the irritating, disorganized obstacles that stand in the way of tourists trying to reunite with their families and get the hell out.

There are, of course, a few Western films depicting Southeast Asian people in ways that defy the norm. ("The Killing Fields, "The Lady," and "The Last Executioner" come to mind.) What sets these films apart is that they allow their nonwhite characters (all of whom happen to be based on real people) to speak, to exist autonomously, to be complicated and challenging and flawed.

Unfortunately, "No Escape" will probably earn more at the box office than all three of these films combined.