Why the left hates this man: Rahm Emanuel's sins against the progressive movement

With big election coming up, liberal groups have declared public enemy #1 -- but it's not a Republican. Here's why 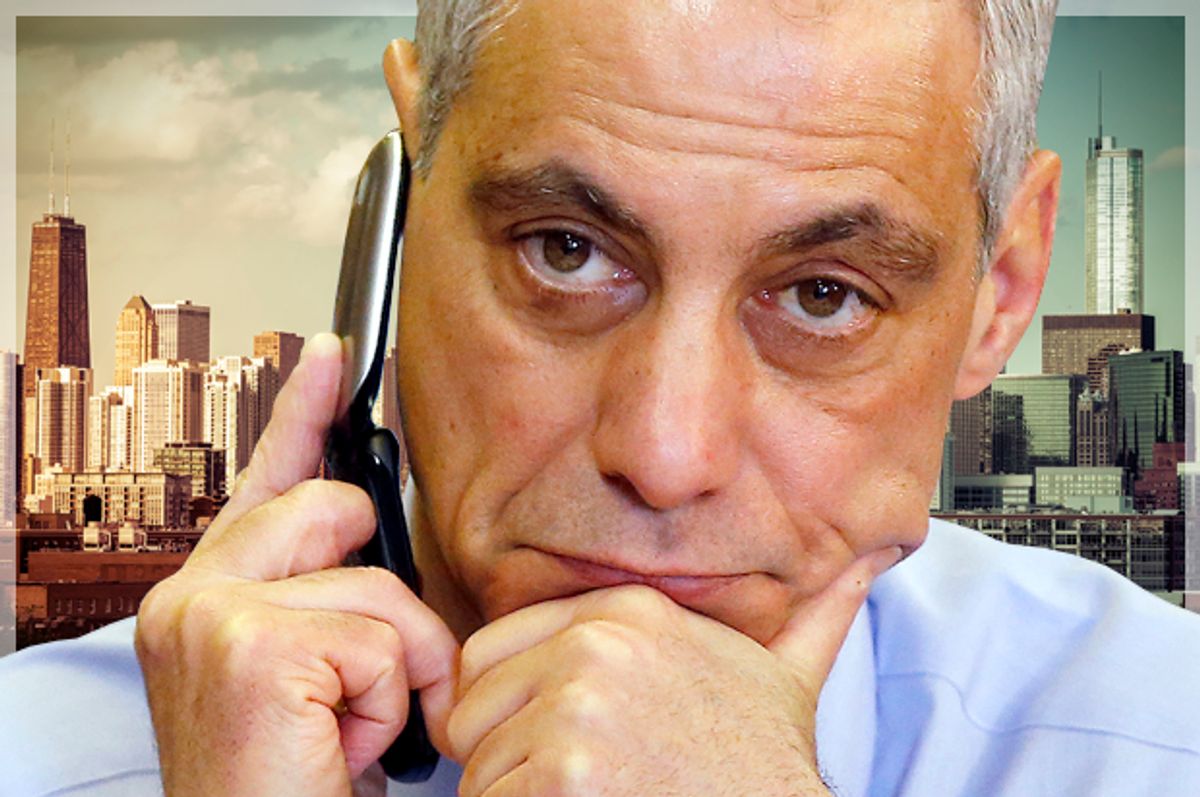 Despite the beltway's belief in the Tea Party as fearsome giant slayers who terrify the otherwise sensible Republican grown-ups to such an extent they dare not defy them, the truth isn't quite as dramatic as all that. The Tea Party did manage to unseat some incumbents in primaries, even one as powerful as former House majority leader Eric Cantor, which hit GOP insiders like a category 5 hurricane. But the fact is that the grassroots activists in both parties have been working to make their respective caucuses reflect the wishes of their constituents and both parties have had some success.

Way back in the day (a decade ago) when the Progressive Netroots were just starting to organize, the first "scalp" any of the left leaning movement activists took was that of a Democratic hack from Maryland named Al Wynn when they backed a progressive challenger by  the name of Donna Edwards. Edwards defeated Wynn in 2008 and is now running to replace Senator Barbara Mikulski who recently announced her retirement. In each congressional cycle Netroots progressives have fought a number of hard-fought primaries, losing more often than they won (just like the Tea Party) but slowly managing to make the House of Representatives a bit more progressive than it was before. Congressional representatives like Matt Cartwright, Beto O'Rourke and Senators like Jon Tester were backed strongly by the grassroots of the party and managed to unseat incumbents. Nobody in the beltway noticed or cared, of course. (Progressives always forget to order their tri-corner hats and Betsy Ross wigs...)

But over time, it's had an effect and not just because of the "scalps" they took, but because all of those hard fought races, whether won or lost, showed the incumbents that there was a restive group of activists out there who could challenge the status quo.  And aside from primary challenges, progressives in congress from Keith Ellison and Alan Grayson in the House to Elizabeth Warren and Tammy Baldwin in the Senate were enthusiastically supported by Netroots groups like, Move On, DFA, PCCC and Blue America (disclosure: I am a principal in that group) among a number of others, a support which translates into small donor involvement, campaign volunteering and strategic advice as well as engaged in grassroots activism for progressive congressional initiatives.  It's made a difference.  The House and Senate today have progressive wings that are active and vocal in a way they did not a decade ago.

Back in 2006 when all this really started to come together there was one Democrat who quickly determined that this nascent progressive movement was a major threat to the status quo. His name was Rahm Emanuel who was, at the time, an Illinois congressman in charge of candidate recruitment for the congressional Democrats. If there's anyone who can take credit for being the catalyst for this long term Netroots commitment to elect progressives to congress it is him. His crude dismissal of grassroots concerns was blatant. His contempt for anyone who disagreed with his centrist Blue Dog/New Democrat philosophy was palpable.  While his wholehearted support for big money interests was seen as the ultimate in strategic brilliance by the beltway elites, it repelled Democratic activists everywhere.

Despite the fact that lame-duck George W. Bush and the war in Iraq were so unpopular that virtually anyone who could draw a breath who had a D after his or her name could have won, the conventional wisdom said that Emanuel's DCCC win in the off year election of 2006 was a validation of his political savvy. (In case you were wondering, Emanuel wasn't elected to congress until after the Iraq war resolution but was on record supporting it, saying that the U.S. needed a "muscular projection of force" there. You can let the shrinks sort out just what that language says about him ...)

When the newly elected President Obama tapped him as chief-of-staff, you could hear progressives screaming "nooooooo" across the land. And when he departed to run for mayor of Chicago, the collective sigh of progressive relief (everywhere but Chicago) was just as audible. He is, in other words, the symbol of everything progressives are trying to change about the Democratic Party.

And right now, in Chicago, a progressive is giving him the personal challenge of his political lifetime. Political observers were stunned last month when a longtime Illinois politician by the name of Jesus "Chuy" Garcia forced Emanuel into a runoff for his second term as mayor. Perhaps stunned isn't really the right word. Apoplectic is more apt. After all, Emanuel has a seemingly unending supply of money with which he tried to buy off every bit of institutional support and his network of elite friendships goes all the way up to the White House. But it turns out that his arrogance and corruption may be too much even for a city that is anything but starry-eyed about such things.

Garcia, on the other hand, is a local pol with a ton of experience in the trenches who is promising to do crazy things like stop closing schools and recklessly raid pension funds, both of which are among Rahm Emanuel's big accomplishments (along with taking lots of money from Republican donors). Historian Rick Perlstein, a Chicago local, has been chronicling this election and in this piece for In These Times he lays out the case for Garcia's experience and political know-how. He also notes that the Emanuel campaign along with his various Republican spokesmen have been doing what you'd expect: issuing thinly veiled attacks on Garcia as lacking "responsibility" if you know what they mean.

It was Illinois’s Republican senator Mark Kirk who came closest to going there. At Pulaski Day ceremonies last Monday, he absurdly asserted, “Rahm’s reelection is essential to maintaining the value of Chicago’s debt market. … It’s a concern if we have some of the less responsible people running against him.”

Understand: at the time, there weren’t “people” running against him, there was a person: the Mexican-American immigrant Chuy Garcia.

The racial overtones in his reference to “those people” was made crystalline by his next statement: “None of them could command the respect of the bond market. A collapse of Chicago debt, which already happened with Detroit, I think would soon follow if somebody who was really inexperienced and irresponsible replaced Rahm.”

Expect more provocations like that as campaign unfolds. Also, expect Garcia not to take the bait.

Garcia speaks to voters about their concerns rather than trying to "maintain the value of Chicago's debt market," (which one suspects might not be the electrifying message Emanuel and his rich friends think it is.) And he isn't easily rattled. Indeed, if anyone is losing what little composure he has, it's Rahm Emanuel who even snapped at advocates for the mentally ill, rudely screaming, "you're gonna respect me!" (Someone forgot to tell him that if you have to demand respect you probably don't deserve it ...)

Needless to say, the national Netroots groups are happy to help Garcia any way they can. They are pulling out all the stops, including coordinating with each other for a "money bomb" today and tomorrow to pull supporters from all over the country to Garcia's cause. It's unlikely they will be able to match Emanuel's immense war chest which is overflowing with Wall Street and Republican money. But they'll certainly be able to help Garcia spread the good word to the people of Chicago and help Rahm Emanuel lose his job. It's just one more step on the long road to a more progressive politics in America.  But no victory could be sweeter.