Just as I was harassed at 8 years old, baseball wunderkind Mo'ne Davis is a target of sexual shaming. Here's why 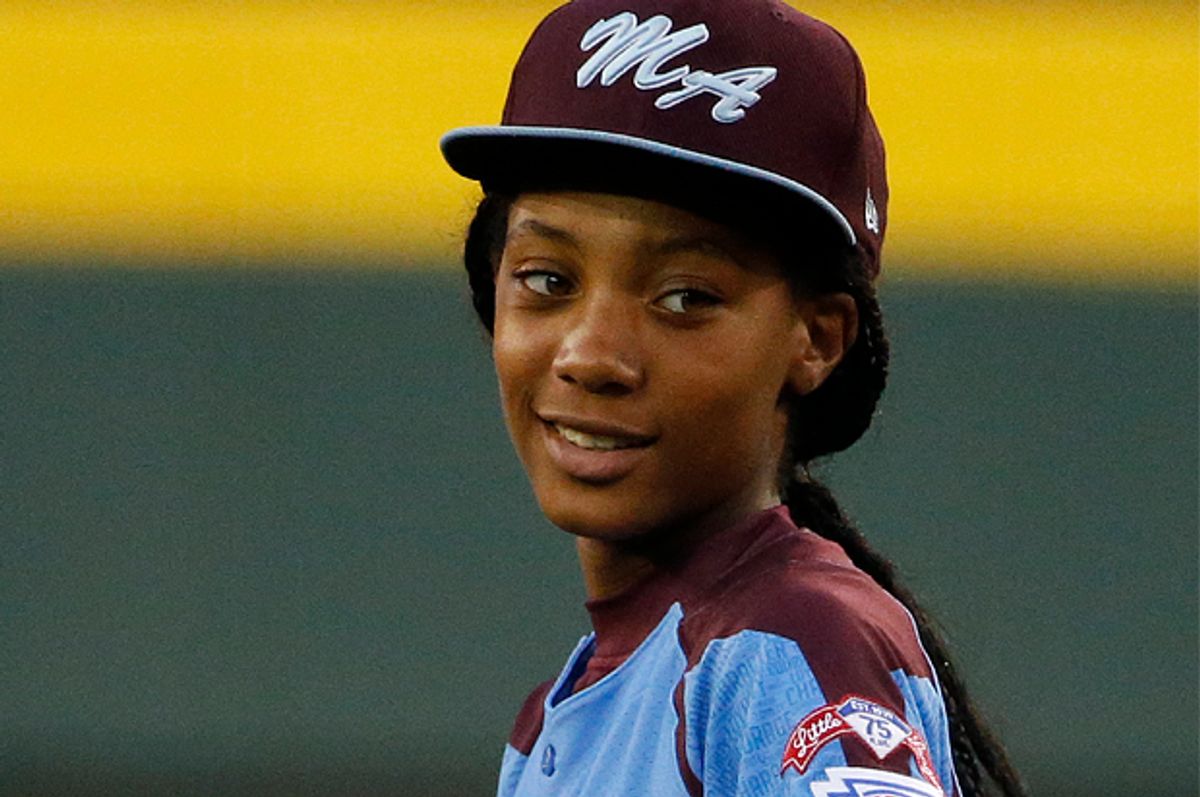 Mo’ne Davis is a Black girl wunderkind. At age 13, she has pitched a shutout at the Little League World Series, becoming the first girl ever to do so, and she has been on the cover of Sports Illustrated. Disney is now planning to do a movie about her called, “Throw Like Mo.”

I’m not ashamed to admit that I still watch the Disney Channel, and I will certainly be tuning in. But everyone isn’t as excited as I am to see a Black girl on the come up. Last week, Joey Casselberry, a sophomore baseball player from Bloomsburg University in Pennsylvania, called Mo’ne a “slut” in response to the news about the movie. He was subsequently expelled from the team.

In response, Davis has forgiven him and she and her coach have asked that he be reinstated. About Casselberry, Davis released a statement, which said:

Everyone makes mistakes and everyone deserves a second chance. I know he didn't mean it in that type of way, and I know a lot of people get tired of like seeing me on TV but just think about what you're doing before you actually do it. I know right now he's really hurt and I know how hard he worked just to get where he is right now.

Her level of empathy is remarkable but not particularly surprising. Black girls learn almost from the womb to empathize with others, even when those others have committed deep injustices toward us.  Perhaps it is the unparalleled level of our suffering that makes us always look with empathy upon others.

But I am troubled. It is absolutely wonderful that Davis has this kind of care and concern and a heart so huge that she can forgive a nearly adult person for insulting her. It goes without saying that she’s a better person than Casselberry.

But she should not have to be. For starters, he meant what he said. One doesn’t slip up and mistakenly call a young teen girl a slut. Second, it bothers me that she sounds almost apologetic about how much others have to see her on television. Girls in our culture are taught that they should never take up too much space, that they should be seen (and look real pretty), but not heard. And Black girls in our culture are damn near invisible, whether in regards to their triumphs or their struggles.

Lest we think this inappropriate sexual shaming of Black girls is an isolated incident, let us not forget that in 2013, The Onion "jokingly" referred to then 9-year old actress Quvenzhané Wallis, as a “c*nt” in reference to her Oscar nomination that year for Beasts of the Southern Wild.

Such language is nothing short of vile and reprehensible. And it raises the question of why young white people have such a prurient fascination with young Black girls? Mo’ne Davis is 13. Quevenzhané Wallis is 11. One is a baseball player. The other is an actress. Why are they being characterized in sexual terms at any level?

The fact that Black girl artists and athletes are understood only in terms of a sexuality that they may not even have begun to articulate for themselves should concern us. That their sexuality is already being publicly circumscribed by white men (and the anonymous Onion tweeter) in dirty and shameful terms is appalling.

Even more concerning is Davis’ identification of Casselberry as “really hurt,” and as a person who has “worked hard to get where he is right now.” Black girls learn early and often the script of toting around someone else’s pain. We learn to identify with those who have abused us, to see their humanity, even when they don't see ours.

I’m not just being flippant. We teach Black girls to be Jesus, and they grow up to become Strong Black Women, who hold families, and communities, and nations together, while they fall apart. And die early. I wish so deeply that Mo’ne Davis does not become this Black woman. I wish that Black girls’ lessons in building character and being the “bigger person,” did not have to be learned in a system that requires we gloss over long histories of racialized sexism and sexualized racism in order to do so.

Recently the African American Policy Forum released a report called “Black Girls Matter: Pushed Out, Overpoliced, and Underprotected.” There are a number of troubling findings in this report. One is that Black girls are six times more likely than white girls to be suspended from school. Among boys, who are suspended more often than girls no matter their race, Black boys were three times more likely to be suspended than white boys. This suggests that Black girls actually suffer a higher instance of racially disparate treatment in matters of school discipline than their Black male counterparts. It also indicates that school is not a particularly safe space for either our girls or our boys.

The report also found that Black girls experience a high degree of sexual harassment and interpersonal violence in their schools and that this is often dismissed as “boys will be boys.” In other words, Black girls' sexual security is a routine casualty of boys’ sexual maturation process. School officials are frequently reticent in addressing the problem, but when girls respond to harassment by defending themselves, they are often subject to zero-tolerance measures by school officials.

Until very recently, I had forgotten my own harrowing experience of continued sexual harassment as an elementary school kid. In the 3rd grade, I took the bus home from school. For some reason, there were a number of older boys on the bus, who to my 8-year old me, seemed really big and really scary. They were probably around the age of 12 or 13. But each day a group of them, led by a ringleader named Gregory, would begin the taunts and jeers. They knew that I was a latchkey kid, that I got off the bus everyday, climbed the hill to our 2-bedroom apartment, and let myself in with a single key hanging from an ice cream cone key chain. So they began to threaten that they were going to get off the bus with me, follow me into my house, and do things to me. The level of menace on the face of the ringleader, the intentional way that he looked at me, the perverse pleasure he got from seeing me squirm in fear, made me believe him. I’m unsure how long it went on –weeks, months. Eventually I told my mother. And it was a very uncomfortable conversation to have, since I had only recently even been taught what sex was! With one phone call to the bus driver, the harassment stopped. I got on the bus, and Greg was curiously silent. I was relieved.

Although we have a broad societal discourse about the premature sexualization of children, somehow, Black girls’ structural vulnerability to sexual abuse continues to escape our notice. Not only do school officials routinely fail to address the challenges that make Black girls particularly vulnerable to sexual violence, but existing disciplinary measures demand Black girls’ silence or compliance, and punish them harshly when they refuse.

Mo’ne Davis did not experience this online sexual commentary in a school setting.  But her magnanimous response to Casselberry should be understood within this broader framework of the ways that Black girls are sexualized, harassed, and left to fend for themselves. If schools are sexually hostile spaces for young women, then certainly a male-dominated culture of sport is no better. I worry that Mo’ne’s rush to empathize and have Casselberry reinstated suggests that she is learning to go along to get along in a male-dominated world of sport. At age 13, her remarks outline the faint edges of an all-too-familiar teenage angst, namely the desire to be liked and accepted.

I recognize that I’m supposed to celebrate Mo’ne Davis’ character and applaud for her being so generous. To be clear, I’m mega proud of Davis. She’s an absolute superstar in my book. I love it when Black girls win. And she is winning. But as both a scholar and a former Black girl, I know that Black women’s prodigious capacity for empathy comes with a cost. Davis’ pain matters here. Not Casselberry’s. Too often Black women and Black girls on their way to becoming Black women are taught that everyone else’s pain matters more than our own. Too often we teach Black girls that they have to lose to win. Mo’ne, a consummate athlete, knows better than that.

That invisibility of Black girl pain costs us our self-confidence, our emotional wellness, our livelihoods and sometimes our lives. And that is not a win. Mo’ne Davis deserves our love, our support, and our advocacy. Sexist and racist behavior is for losers. And we need to call it out, denounce it, dismantle it, and make space for Black girls to win.