Instagram has a problem with women: Bloody accident photos are fine, but periods are "inappropriate?"

How a bloodstain went viral 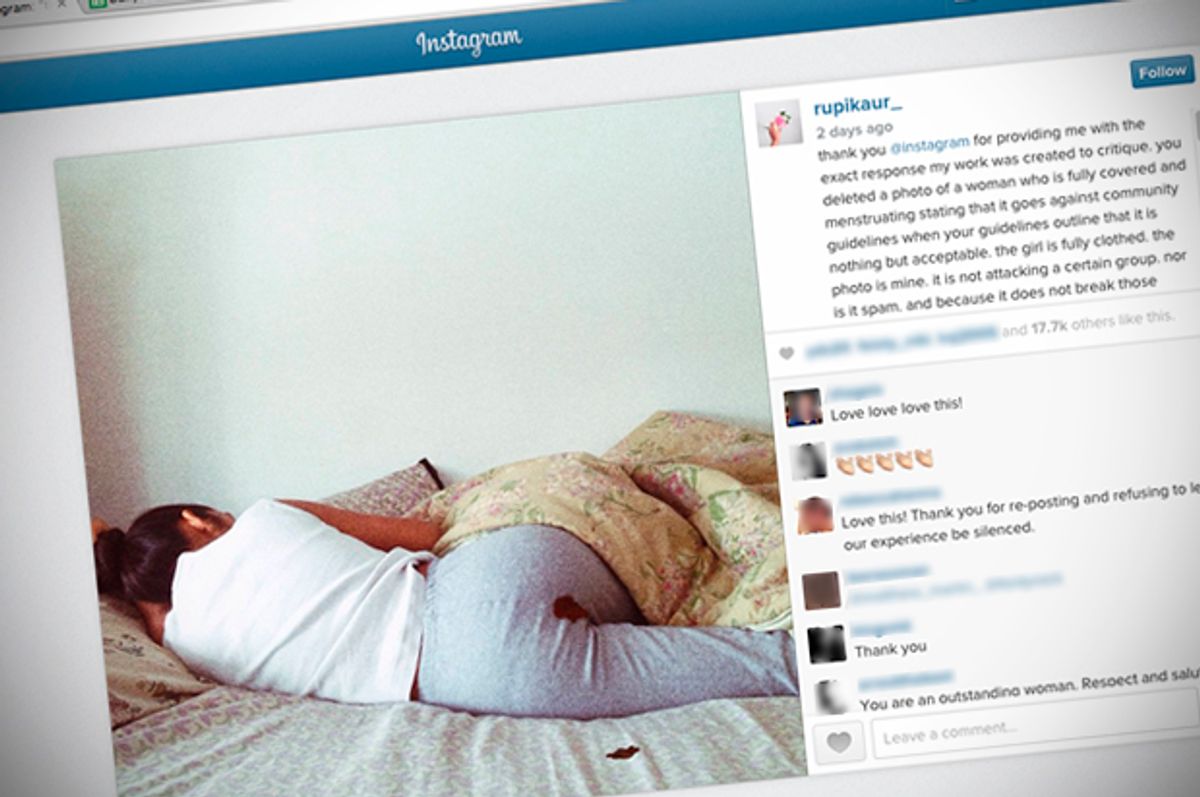 Instagram loves women. It loves women showing their bodies. Women in bikinis, women in lingerie. It loves cleavage and sexy girls on the beach. What it has less of a fondness for -- as it has amply demonstrated again and again – is the depiction of women in a way that suggests the female experience may sometimes be deemed untidy. And the thing about women is they get periods.

This week, poet Rupi Kaur decided to test how Instagram would deal with an image clearly suggestive of menstruation. And Instagram did not surprise her at all. On Kaur's Tumblr, she and her sister Prabh have created a small photo series called Period, a collection of simple images familiar to any woman -- a stained item spilling out of the laundry, a red blob by the shower drain. Kaur says, "A majority of people. Societies, and communities shun this natural process. Some are more comfortable with the pornification of women. The sexualization of women. The violence and degradation of women than this. They cannot be bothered to express their disgust about all that. But will be angered and bothered by this." And sure, enough, when she initially posted a photograph of herself, reclining and fully clothed in bed and with a telltale red stain emanating from the crotch of her pants and blotting the sheet, she received a notification from Instagram that it had been removed because "It doesn't follow our community guidelines."

Kaur promptly posted that "Their patriarchy is leaking. Their misogyny is showing. We won't be censored." And she replied to Instagram, "Thank you @instagram for providing me with the exact response my work was created to critique…. I will repost it again. I will not apologize for not feeding the ego and pride of misogynist society that will have my body in an underwear but not be okay with a small leak." One day later, she jubilantly announced that Instagram had reversed its decision and thanked her followers for "your movement to not quiet down."

It's almost laughable how transparent Instagram's confusion over what constitutes inappropriate content is. And if it would like to argue for a second that it has a fundamental issue with blood, it has a whole lot of skateboarder posts to answer for. Do a hashtag search of words like "accident" and "injury" and "hallofmeat" and you can find plenty of visual bro bragging over blood ravaged faces and exposed bone. Would you like to see an image of a finger ripped in half, lengthwise? No problem! Smiling guys with explosively bloody noses? Take your pick! Search under period-related terms, though, and you're likelier to get an image of a girl eating a Snickers bar or a shop displaying its reusable menstrual products.

Like Facebook, Instagram has had an often absurdly contradictory stance on how it treats the female body. It has long come under fire – often from high profile critics like Rihanna, Miley Cyrus and Chelsea Handler – about its prim stance on female nipples. Earlier this year, the online Australian magazine Sticks and Stones found an image removed – and its account briefly suspended – after posting a photo of two models in bikinis. Two models who were clearly unshaved. As the agency’s director, Ainsley Hutchence, said at the time, "Clearly this is absolutely sexist. Instagram believes that women should wax or get off their platform." Instagram, once publicly called out for its action, quickly reversed itself with a shrugging, "We don’t always get it right."

What the photo sharing platform is apparently going to have to keep learning is that females are on Instagram. Recent demographics show it's used by over 80% of upper income US teen girls. Girls get periods. They document their lives. Do the math. And elsewhere, as Kaur points out, "We menstruate and they see it as dirty. Attention seeking. Sick. A burden. As if this process is less natural than breathing." In India, only 12 percent of the female population has access to clean pads. A BBC report last year noted that during their periods, Indian women "can’t visit temples or public places, they’re not allowed to cook or touch the water supply." In many places, menstruating females are not permitted to attend school or work. Our opportunities as girls and women, across the world, are often directly influenced by the taboos surrounding menstruation, and our access – or lack of – to safe, clean methods of managing our periods. So if you're a platform that reaches millions of individuals every day, you have a unique opportunity to educate and enlighten. Maybe even help. Or you can go on treating female experiences that aren't sexy as offensive. What women are expected to endure in silence is real, and that silence hurts them. We have to fight for change. And you can't have a battle without blood.