Terror in the Alps: Behind the dark allure of the Germanwings disaster

What's so terrifying about Andreas Lubitz and what he did? That it's not a movie, and it will never make sense 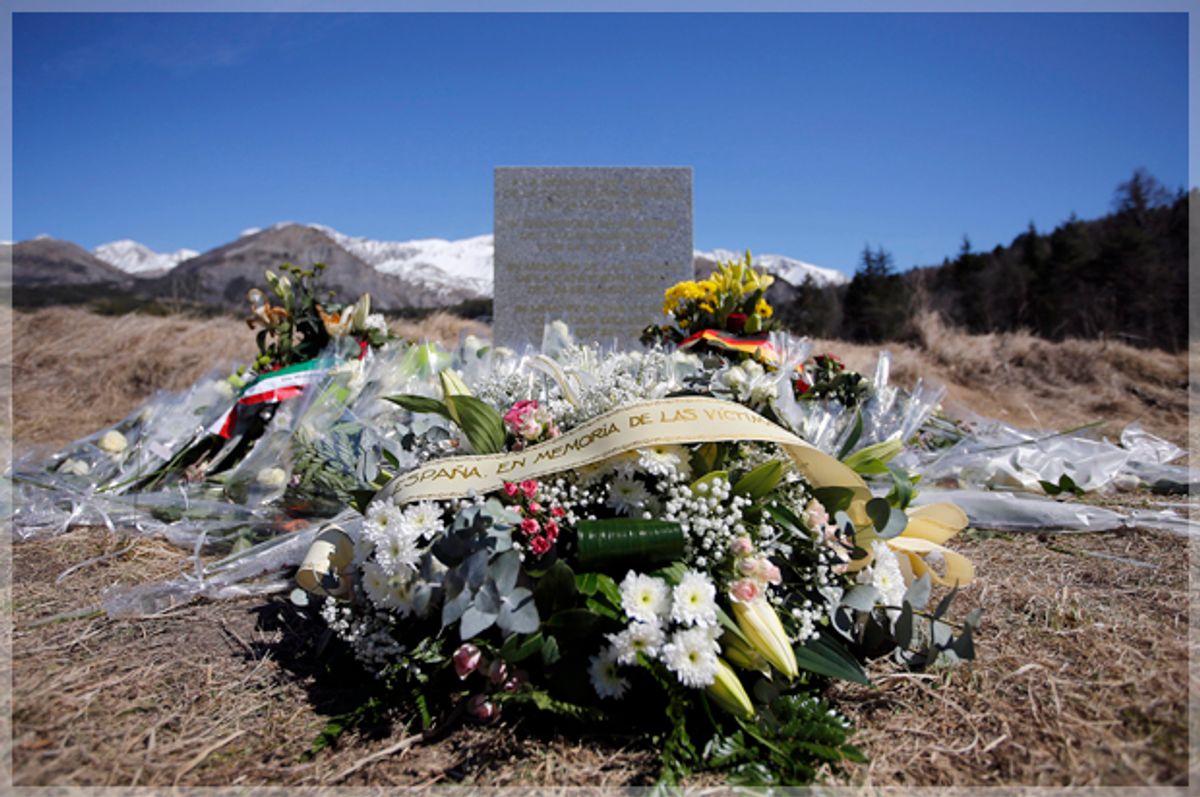 What sense can we possibly make of this week’s nightmarish disaster in the French Alps, where the young and apparently healthy co-pilot of a German jetliner deliberately crashed his airplane into the mountains, killing himself and 149 other people? We learned on Friday that Andreas Lubitz had been diagnosed with a mental illness he concealed from his employers, but that should be understood as a clue rather than anything like an explanation. It’s reasonable to argue that people with certain psychiatric diagnoses shouldn’t fly airplanes, but almost none of them contemplate spectacular acts of mass murder, still less commit them. To launch a witch hunt against every pilot who’d ever seen a shrink or taken an antidepressant would be one of the worst possible outcomes of this tragedy.

Does this bizarre eruption of murderous and/or suicidal madness (if that’s what it was) represent a failure of technological and bureaucratic oversight? Or is it a symptom of some cultural pathology that goes much deeper than that? Was it an enactment of the decline of the West, a pathetic display of our collective loss of moral fiber? Does it go along with the melting polar ice caps and perishing songbirds, as an early death knell for our civilization? Or is it best understood as a fluke event, not entirely avoidable but probably not repeatable, that should not be allowed to interrupt the normal course of business?

Those questions don’t have answers, especially since we are still learning how and why Lubitz wound up in the cockpit of a Germanwings flight from Barcelona to Düsseldorf in such a severely disordered condition. But the existence of such questions and many others like them, which carry such obvious ideological freight, speaks to our desire to frame this random and terrifying event as part of a story we already understand. Personally, I see our horrified fascination with Lubitz and the crash as a metaphorical displacement, almost a distraction. It’s a way to confront evil and madness at an individual and unavoidable level, instead of dealing with manifestations of those things that are more difficult to see and almost impossible to combat.

Friday’s New York Times was dominated by news of the Germanwings disaster, and no wonder – it’s a spectacular tragedy that had already ruled cable news for more than 24 hours. But the Times published something much more important on Friday, not to mention more disturbing: a hair-raising investigative feature by Mark Binelli, from the forthcoming Sunday magazine, about the devastating psychological damage inflicted on thousands of American prison inmates housed in "Supermax" isolation units. So one of the day’s big stories had far-reaching social and cultural consequences, and spoke to our civilization’s misguided and self-destructive priorities. As far as we can tell right now, the other one (the one everybody read) was about one crazy guy who did a crazy thing.

It was a spectacularly crazy thing, to be sure. We’ll never know what was going on inside Andreas Lubitz’s head and no doubt we’re better off, but creating a massive media spectacle may well have been the point. As a co-worker of mine put it, the story of that Germanwings flight feels like a horrible dream suffused with inexplicable dread – a “Final Destination” movie, as scripted by Kierkegaard. It was supposed to be a routine European commuter journey, which in thousands upon thousands of previous iterations had involved short naps, a bored perusal of the Financial Times and a cup of bad coffee. This time it ended with screaming passengers, a pilot hammering on a locked door and a vertiginous plunge to instantaneous death.

Sheer horror and pity, along with the irrational if technically accurate fear that something dreadful is just as likely to befall us as someone else, may account for our fascination with the spectacle. But the uncanny quality my colleague referred to plays a major role as well. Like the mysterious disappearance of the Malaysian Airlines plane a year ago, the Germanwings crash seems to involve factors that elude ordinary understanding, most notably those factors hidden in the human mind or the human soul. Statistics tell us that air travel is safer than ever, and that on the rare occasions when planes crash, deliberate action by a pilot is perhaps the least likely cause. (Nothing can be absolutely ruled out in the Malaysian case, but that particular explanation seems unlikely.)

But what are facts, set against the illogical allure of the uncanny? It insists upon grand subterranean connections between unexplained events and on hidden knowledge that will be revealed, and leads to the overwhelming temptation to supply explanations that do not fit and perceive patterns that do not exist. If the Germanwings crash really had been a dream, instead of an event that led to the real-world deaths of scores of people, we would feel justified in combing it for hidden meanings and symbolic resonances. In fact, we do that anyway. If we fall too easily into interpreting real-world events as if they were works of the imagination, and into paranoid political dramas in which nothing can ever be anomalous or inexplicable, we shouldn’t be too hard on ourselves. In what is hilariously termed the Information Age – because calling it the Age of Misinformation, Disinformation, Lies and Fantasy would take too long – the boundaries between truth and fiction, which always lacked any absolute ontological clarity, have become increasingly murky.

Indeed, the murk that obscures that border between knowing nothing and knowing everything -- that simultaneously makes us believe there is no such thing as reality and that we are a hair’s breadth away from understanding the whole story – has become the central subject of media discourse. It informs the dramatic “re-enactments” found in every documentary film, the true-crime investigations of “Serial” and “The Jinx,” and the laziness and wishful thinking of almost all broadcast news, which reached its acme in Brian Williams’ fanciful war stories and Lara Logan’s fictional Benghazi reporting. New York magazine recently published a long essay by Jeff Wise, a leading conspiracy theorist during the hunt for Malaysian 370, and beneath a cannily applied veneer of epistemological uncertainty and postmodern self-scrutiny, Wise is still retailing the idea that Vladimir Putin hijacked the plane and stashed it in Kazakhstan.

As we have repeated endlessly for 13 years, the 9/11 attacks were “like a movie.” Those events have now disappeared into the mists of national mythology, and all of reality has become like a movie too, at least as we receive it within the hyperactive Plato’s-cave of the Internet news cycle. (Only the movies are less “like the movies” than they used to be, which is one of Hollywood’s biggest problems. It has lost its role as the gatekeeper of apocalyptic fantasy.) We can’t resist the urge to make sense of the plot or, to put it more grandly, to search for meaning, which is quite likely a defining characteristic of human consciousness. But what movie-meanings can we discover in an event as baffling as the Germanwings crash? Only those we bring to it, which are likely to be dangerous.

Within hours of the crash, the usual suspects were abroad on Fox News and the Internet, perceiving the work of the Islamic State or the Iranians or Putin, or decrying yet another “false flag” operation by the forces of the New World Order, to accompany 9/11 and Sandy Hook and Charlie Hebdo. I’m sure those people have not been entirely defeated by the news that Lubitz did not seem to be affiliated with any political or religious movement. Conspiracy theorists delight in implausibility – what is Occam’s razor but an instrument of mind control? – and will gleefully pronounce that whatever evidence the authorities choose to release is clearly false.

Those colorful hypotheses have receded behind the more responsible-sounding questions I mentioned at the outset, all of which boil down to “What does this mean?” and “How can we make sure it doesn’t happen again?” (“It means nothing” and “We can’t” are not acceptable answers, in case you were wondering.) But the conspiracy theorist’s confusion and disappointment are shared by the rest of us, in diluted form: This tragedy would be a whole lot easier to wrap our heads around if Andreas Lubitz could be rewritten as a fanatical Muslim or a neo-Nazi or a CIA asset or Vladimir Putin’s Teutonic boy-toy. Any of those things (and many others we could come up with) would fit into a narrative we already understood -- a movie plot that promises some redemption or revenge in the next act -- instead of leaving us with the gnawing emptiness of a dreadful story that is now over, and that will never make sense.