As Indiana peddles its "religious freedom" garbage, it's time to call the religious right's trash what it really is 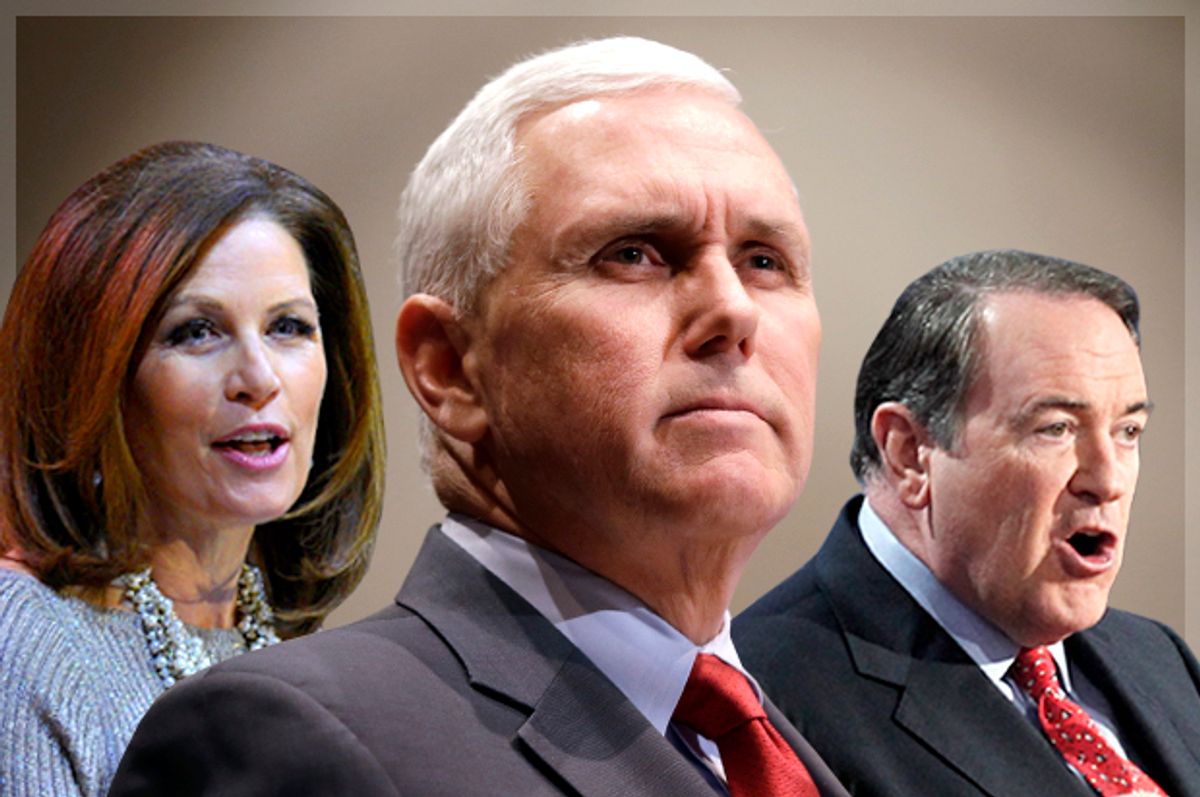 Just in time for Holy Week, the State of Indiana has passed a new Religious Freedom Restoration Act. The law explicitly permits for-profit corporations from practicing the “free exercise of religion” and it allows them to use the “exercise of religion” as a defense against any lawsuits whether from the government or from private entities. The primary narrative against this law has been about the potential ways that small businesses owned by Christians could invoke it as a defense against having to, for instance, sell flowers to a gay couple for their wedding.

Any time right-wing conservatives declare that they are trying to restore or reclaim something, we should all be very afraid. Usually, this means the country or, in this case, the state of Indiana is about to be treated to another round of backward time travel, to the supposedly idyllic environs of the 1950s, wherein women, and gays, and blacks knew their respective places and stayed in them. While the unspoken religious subtext of this law is rooted in conservative anxieties over the legalization of same-sex marriage in Indiana, Black people and women, and all the intersections thereof (for instance Black lesbians) should be very afraid of what this new law portends.

Last year, the Supreme Court ruled in the Hobby Lobby decision that corporations could exercise religious freedom, which means that corporations can deny insurance coverage for birth control. Now this same logic is being used to curtail and abridge the right of gay people to enjoy the same freedoms and legal protections that heterosexual citizens enjoy.

And given our current anti-Black racial climate, there is no reason to trust that these laws won’t be eventually used for acts of racially inflected religious discrimination, perhaps against Black Muslims or Muslims of Arab descent, for instance. Surely this kind of law in this political climate sanctions the exercise of Islamophobia.

As a practicing Christian, I am deeply incensed by these calls for restoration and reclamation in the name of religious freedom. This kind of legislation is largely driven by conservative Christian men and women, who hold political views that are antagonistic to every single group of people who are not white, male, Christian, cisgender, straight and middle-class. Jesus, a brown, working-class, Jew, doesn’t even meet all the qualifications.

Nothing about the cultural and moral regime of the religious right in this country signals any kind of freedom. In fact, this kind of legislation is rooted in a politics that gives white people the authority to police and terrorize people of color, queer people and poor women. That means these people don’t represent any kind of Christianity that looks anything like the kind that I practice.

To be clear, because I’m an academic, I get static often from folks who wonder how I could dare ally myself in name and religious affiliation with the kind of morally misguided, politically violent people who think it reasonable to force women to have babies they do not want and who think their opinions about whom and how others should marry matters even a little bit.

I often ask myself whether I really do worship the same God of white religious conservatives. On this Holy Week, when I reflect on the Christian story of Christ crucified, it is a story to me of a man who came, radically served his community, challenged the unjust show of state power, embraced children, working-class men and promiscuous women and sexual minorities (eunuchs). Of the many things Jesus preached about, he never found time to even mention gay people, let alone condemn them. His message of radical inclusivity was so threatening that the state lynched him for fear that he was fomenting a cultural and political rebellion. They viewed such acts as criminal acts and they treated Jesus as a criminal. And all who followed him were marked for death.

This is why I identify with the story of Jesus. And frankly, it is the only story there really is. This white, blond-haired, blue-eyed, gun-toting, Bible-quoting Jesus of the religious right is a god of their own making. I call this god, the god of white supremacy and patriarchy. There is nothing about their god that speaks to me as a Black woman of working-class background living in a country where police routinely murder black men and beat the hell out of black women, where the rich get richer while politicians find ever more reasons to extract from the poor, and where the lives the church imagines for women still center around marriage and motherhood, and no sex if you’re single.

This God isn’t the God that I serve. There is nothing holy, loving, righteous, inclusive, liberatory or theologically sound about him. He might be “biblical” but he’s also an asshole.

The Jesus I know, love, talk about and choose to retain was a radical, freedom-loving, justice-seeking, potentially queer (because he was either asexual or a priest married to a prostitute), feminist healer, unimpressed by scripture-quoters and religious law-keepers,  seduced neither by power nor evil.

That’s the story I choose to reflect on this Holy Week. The Christian lawmakers seeking to use the law to discriminate against gay people are indicative of every violent, unrighteous, immoral impulse that organized religion continues to represent in this country. I have said elsewhere recently that it is a problem to treat racism as if it will simply go extinct. But as I watch the religious right engineer pain and obstacles for queer people in America’s heartland, I find myself wishing that this particularly violent and vicious breed of Christianity would die off.

I cannot stand in a church and worship on Sunday alongside those who on the very next Monday co-sign every kind of legislation that devalues the lives of Black people, women and gay people. I am a firm believer that our theology implicates our politics. If your politics are rooted in the contemporary anti-Black, misogynist, homophobic conservatism, then we are not serving the same God. Period.

And more of us who love Jesus, despite our ambivalence about Christianity, the Church or organized religion, need to stand up and begin to do some reclamation of our own.

I am heartened to say that there is a generation of young people of faith rising up, spurred on by the Ferguson events of last summer. A group of young seminarians at Union Theology Seminary in New York City have been at the fore of effort to #ReclaimHolyWeek. I spoke with one of the organizers, Candace Simpson, who told me that, “#ReclaimHolyWeek is a way for us to challenge and disrupt the sanitized stories we share during Holy Week. We refuse to pretend as though the main story of Jesus’ resurrection was that he ‘died for our sins.’ We need to be better in discussing the ways Jesus represented a threat to his empire, that his teachings disrupt power structures. We pretend that we would be mourning at his tomb, but it is clear in the ways we blame victims of the system that we are not as moral as we pretend to be.” They will spend this week protesting various forms of state-sanctioned violence against Black and Brown people.

What this vocal contingent of the religious right is seeking to restore is not religious freedom but a sense of safety in expressing and imposing dangerous, retrograde and discriminatory ideas in the name of religion. I continue to support the free and unimpeded expression of religion. And I am hopeful that Indiana Gov. Mike Pence’s call for “clarification of the law” amid a massive backlash will actually force the Legislature to explicitly ban discrimination based on gender and sexual orientation. Then perhaps the law could do what some legal scholars claim it was meant to do, namely, protect freedom of religious expression for religious minorities in the U.S.

Alongside that, I maintain that another kind of reclamation needs to occur. We need to reclaim the narrative of Jesus’ life and death from the evangelical right. They have not been good stewards over the narrative. They have pimped Jesus’ death to support the global spread of American empire vis-à-vis war, “missions,” and "free trade," the abuse of native peoples, the continued subjugation of Black people, and the regulation of the sexual lives of women and gay people. Let us mark this Holy Week by declaring the death to the unholy trinity of white supremacist, capitalist, heteropatriarchy. And once these systems die, may they die once and for all, never to be resurrected.