10 of the most fear-mongering political ads in American history

In the 1960s, political ad makers embraced fear as a campaign strategy and they haven't looked back since 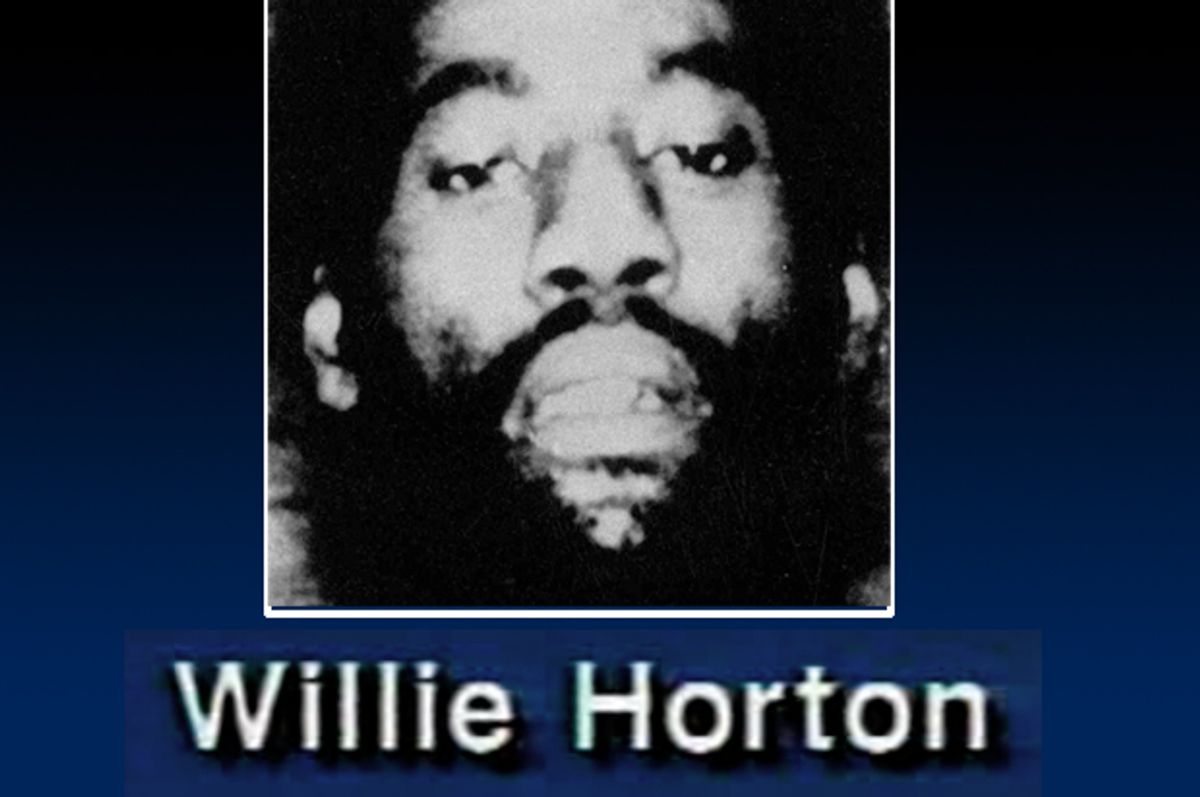 While negativity has always been an integral part of political advertising, there actually was an era in which fun and upbeat election ads were occasionally made. Dwight D. Eisenhower’s 1952 campaign ad (among the very first political ads to air on television) featured a cartoon parade of sign-bearers high-stepping to a song called “I like Ike!” There is no mushroom cloud, no saucer-eyed children staring into an uncertain future. In their place, we find a drum-playing elephant and the peppy musical request that we “get in step with a guy that’s hep! Get in step with Ike!” Though all of Eisenhower’s TV ads weren’t so cheerful (check out the more serious-minded “Eisenhower Answers America” series), the existence of such jubilance in a political ad reveals that joy and optimism weren’t quite so off-limits in those early days.

By the 1960s, political ad makers began to embrace fear, and use of the tactic has grown exponentially with each passing year. Today, political candidates compete to see who can out-terrify constituents, shoehorning menacing images into ads meant to exploit and manipulate our fears.

Here are 10 of the most fear-mongering political ads in recent history.

1. Lyndon Johnson’s “Daisy” (1964). “Daisy” changed the game for political advertising and made the element of fear in election ads very nearly an imperative. The message was both frightening and frighteningly simple: LBJ’s Republican opponent Barry Goldwater was a hawk and warmonger who would surely lead the U.S. into a nuclear war if elected. Even today, “Daisy,” with its juxtaposition of childish innocence and global destruction, feels chilling and astoundingly effective. Interestingly, the ad only aired once, on Sept. 7, 1964, on NBC. The Goldwater team immediately complained and the Johnson campaign pulled the ad — but by then, “Daisy” had become its own story, and was being shown over and over on news broadcasts. Johnson won by a landslide and “Daisy” made political history. While LBJ’s campaign team produced two other ads making brilliant use of fear (“Girl With Ice Cream Cone,” which also hyped anxieties over nuclear war, and “KKK for Goldwater,” which painted the Republican contender as a virulent racist), “Daisy” remains the pinnacle.

2. George Bush’s “Willie Horton” (1988). Bush 41’s “Willie Horton” ad against opponent Michael Dukakis more than earned its place on this list and in the canon of political racial dog whistles. A straightforward, no-frills piece of video, it nonetheless did an excellent job of exploiting white America’s racialized fears about crime. Against the backdrop of each candidate’s color photograph, a voiceover states that Bush supports the death penalty, while Dukakis “not only opposes the death penalty, he allowed first-degree murderers to have weekend passes.” As a grainy black-and-white photo of an African-American man’s face appears, we’re informed he was one of Dukakis’s furloughed prisoners. Against an even grainier arrest shot, we learn that during his escape, Horton kidnapped a couple, stabbing the man and raping the woman. (The text onscreen reads simply, “Kidnapping Stabbing Raping.”) Though the “Horton” ad wasn’t the sole decider, it had an undeniable impact on the election’s outcome, tipping the scales heavily in Bush’s favor.

3. The Republican National Committee (2014). The RNC’s 2014 midterm ad plays like a whack-a-mole of scare-mongering, with every possible boogeyman thrown into the bubbling digital cauldron of fear. “ISIS gaining ground! Terrorists committing mass murder! Ebola inside the U.S.! Americans alarmed about national security!” All the while, the requisite frenetic music builds to an unnerving crescendo. Save yourself! “Vote Republican,” the ad advises, further blurring the line between reality and satire.

4. Tom Tancredo's “Tough on Terror” (2007). In his bid for the 2008 presidency, Rep. Tom Tancredo of Colorado released a campaign ad that leaned on fear so hard it seemed like an "SNL" parody. The spot opens with Tancredo, serious as a heartbeat, looking into the camera and stating: “I approved this message, because someone needs to say it.” Against the sounds of a ticking time bomb, we watch a faceless figure in a hoodie take a backpack bomb to a packed mall, leaving it there to detonate. “There are consequences to open borders beyond the 20 million aliens who’ve come to take our jobs,” the voiceover warns. In rapid succession, we see flashes of terrorist acts from England, Spain and Russia, including the graphic image of a wounded and bleeding little boy. The scene fades to black, followed by the sound of an explosion, and these words fill the otherwise black screen: “Tancredo...before it’s too late.”

5. David Perdue’s “Secure Our Borders” (2014). David Perdue, a Georgia Republican running for U.S. Senate during the 2014 midterms, offered an ad that played so fast and loose with the truth it’s fairly stunning to behold. In Perdue’s commercial, there’s the not-too-subtle suggestion that any day now, ISIS will be infiltrating America...by way of Mexico. Not only does the ad rely on half-truths and sentences edited so they read the exact opposite of their original intent, but its central premise — that Muslim extremists will be pouring over the borders into Texas — is nothing short of fantasy. A more precise breakdown of how Perdue, who succeeded in gaining the Congressional seat he was after, willfully rearranged the truth with this ad, can be found here.

6. Walter Mondale’s “Teach Your Parents” (1984). Taking a page from LBJ’s 1964 campaign book, the Mondale-Ferraro team recycled the contrasting images of sweet, wide-eyed children with those of ballistic missiles and nuclear devastation. The whole uncomfortable scene is set to Crosby, Stills, Nash & Young’s “Teach Your Children,” a song so reminiscent of the 1960s peace and anti-war movements that the incongruity is even more effectively driven home. With Ronald Reagan’s “Star Wars” program underway, Mondale hoped to make the incumbent synonymous with the threat of war. It wasn’t enough to win, and Reagan ultimately returned to the White House with nearly 60 percent of the popular vote.

7. Hillary Clinton’s “3 a.m. Call” (2008). When it became clear that Democratic contender Barack Obama was an actual threat during the primaries, Hillary Clinton’s campaign team decided to take the tried-and-tested fear approach. Roy Spence, the man responsible for Walter Mondale’s iconic 1984 “Red Phone” ad, developed a spot that borrowed heavily from the former, but was updated for the times. From just the visuals, it’s hard to tell if we’re watching an ad for home security systems or national security. Cherubic children sleep in moonlit bedrooms. A soothing voiceover tells us, “It's 3:00am and your children are asleep.” And the tension slowly increases. “There's a phone in the White House, and it's ringing. Something is happening in the world. Your vote will decide who answers that call.” Hoping to nudge anxieties about then-freshman senator Barack Obama’s national security preparedness — or his lack thereof — the ad suggests the phone should be answered by someone who “knows the world's leaders, knows the military, someone tested and ready to lead." It later made for a hilarious "SNL" parody.

8. Pat Buchanan’s “Meatballs” (2000). Co-architect of the Southern strategy,admirer of Hitler and three-time presidential candidate Pat Buchanan stoked fears about immigration in a political ad even more ridiculous than you might've imagined. As a “real American” eats his dinner of spaghetti and meatballs, a radio announcer states that, “English is no longer America’s national language.” The startled man begins choking and, gasping for air, runs to the phone and dials 911, only to hear a prerecorded message: “For Spanish, press one. For Korean, press two. For Bengali, press 3...” The message, apparently, is that immigration is going to choke America to death, one way or another. Thankfully, Buchanan didn’t win, but the ad remains a shrine to fear-mongering and xenophobia if there ever was one.

9. George W. Bush’s “Wolves” (2004). A campaign ad that effectively said, "Vote Bush-Cheney '04 — or Else!" The memory of 9/11 was still fresh across America in 2004, but not quite fresh enough for the liking of the Bush-Cheney team, which used the election as an excuse to ramp up fears of another terrorist attack if John Kerry won. In a commercial harkenening back to Ronald Reagan’s 1984 Soviet fear-stoking “Bear” campaign ad, the opening shots show an overgrown and wild forest. Through the leaves, we snatch glimpses of wolves, until the final shot, when the entire pack is shown. A voiceover, having noted that Kerry “and the liberals in Congress” voted to cut intelligence funds, states that they were “cuts so deep they would’ve weakened America’s defenses.” As the wolf pack — muscular and frightening — runs toward the camera, the voiceover continues: “And weakness attracts those who are waiting...to do America harm.” In an interesting post note, among the voices decrying the ad was Defenders of Wildlife, who released a press release which read, in part, “How ironic for George Bush, who has been the most anti-wildlife president ever, to turn to the very symbol of endangered wildlife in America — the wolf — for assistance in perpetuating his administration.” To drive the point home, they added, “[I]t is worth pointing out that a wolf is a fierce defender of its homeland and it has learned that when it attacks, it needs to work with others to maximize its chance of success."

10. Allen Weh’s “Restore Leadership” (2014). Republicans often peddle the myth of Obama’s presidency as one unprecedentedly long vacation, even though the numbers don’t nearly add up. New Mexico Republican Allen Weh’s 2014 ad for U.S. Senate relied on the same falsehood, portraying an endless stream of images of Obama at leisure, contrasted with heartbreaking shots from Ukraine and the Middle East. Thus far, that still qualifies pretty much as politics as usual. Except that Weh also included a still image of the unidentified ISIS-affiliated killer of American journalist James Foley. Democratic incumbent Tom Udall’s campaign manager said of the shot, taken directly from the video of Foley’s beheading released just a week earlier, that the “use of [Foley’s] killer’s horrific image for personal gain in a campaign ad is reprehensible and appalling." Twitter also had a few things to say about the ad. Udall, in the end, kept his U.S. Senate seat.

Honorable Mention: Carly Fiorina’s “Demon Sheep” (2010). Like some off-off-Broadway play created in the fevered mind of a drug-addled lunatic after several days of not sleeping, Carly Fiorina’s 2010 U.S. Senate election ad is everything the Internet loves. There’s a weird, nonsensical semi-narrative; several arbitrary and oddball aesthetic choices; a hamfisted and long-winded music score and voiceover; and did we mention a red-eyed, demon sheep? If there is a political ad version of an Adult Swim gag video, this is it. Which might explain why the video became a viral hit, and #demonsheep quickly became a trending topic on Twitter.