If Mike Pence and pizza-gate are culture war as farce, Purvi Patel's tragedy shows us the right's dark victory 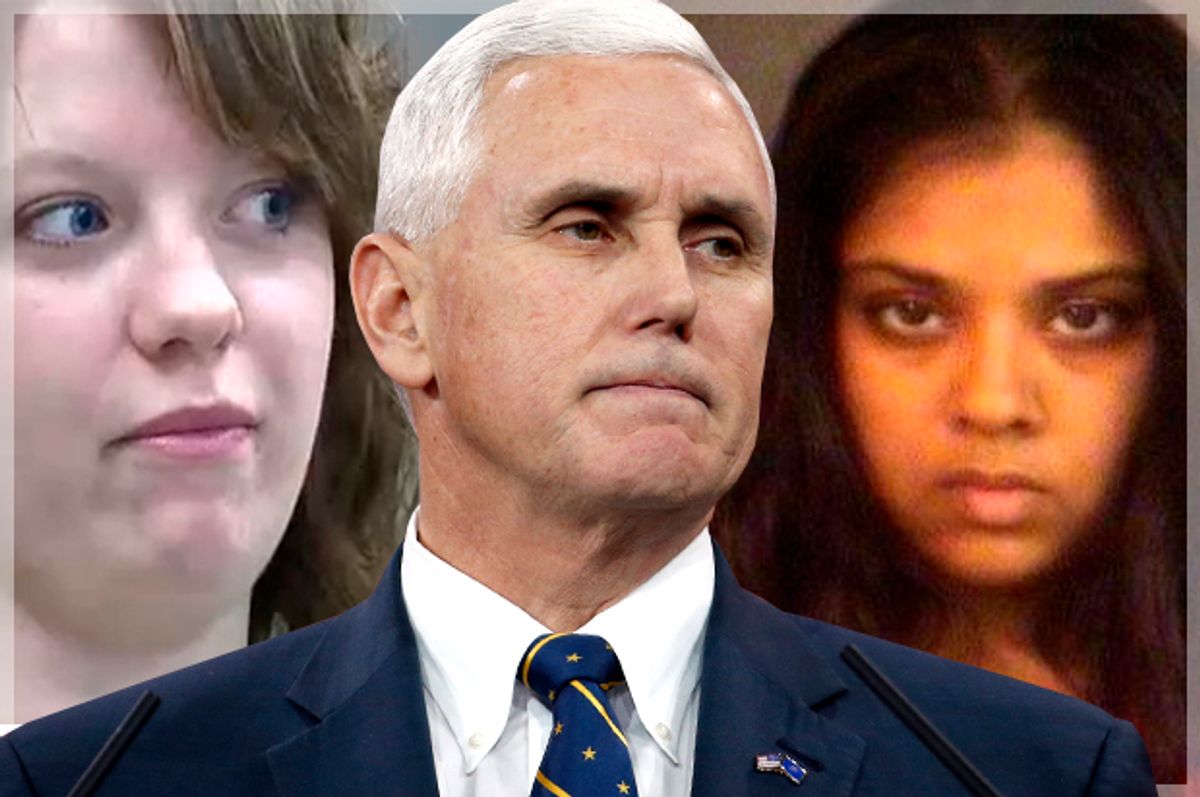 In Indiana this week, it was the worst of times and – no, wait; it was just the worst of times. This was the week of “hate pizza,” one of the weirdest and most revealing non-stories of recent American history, in which a small-town businesswoman’s ill-considered response to a reporter’s hypothetical question became headline news. It was also the week when a 33-year-old Indiana woman named Purvi Patel was sentenced to 20 years in prison for ending her own pregnancy, in the most dramatic application to date of a recent wave of anti-abortion “feticide” laws. Both these Hoosier news stories, with their misunderstood and/or persecuted female protagonists, represent new plot twists in the long-running culture war that underlies America’s political divisions. But one of them has ominous and far-reaching consequences, and it’s the other one that became a huge social-media phenomenon. I won’t even pretend to make you guess which is which.

Actually, I don’t mean to suggest that the story of Crystal O’Connor and Memories Pizza of Walkerton, Indiana – the family-owned business that would rather not supply hypothetical pepperoni-and-mushroom pies to a hypothetical Adam-and-Steve wedding -- is without significance. It certainly has some morbid entertainment value, on approximately the same level as a 1989 Jerry Springer broadcast. But the O’Connor family and their defiantly heterocentric pizzeria are just colorful props or extras, hastily erected and soon to be consigned to the same political-cultural limbo as Joe the Plumber and that lady who lost her job over ignorant tweets about HIV and Africa. They put a human face, so to speak, on the combination of ignorance, bigotry and sheer clumsiness that produced Indiana’s instantly infamous “religious freedom” law, which appeared to allow businesses to discriminate against LGBT people in the name of Jesus.

Neither the Hoosier State’s Tea Party-dominated legislature nor Gov. Mike Pence, one of the 387 Republican elected officials currently contemplating a 2016 presidential campaign, seems to have considered in advance how the national media would cover their ingenious new end-around on gay rights – or, for that matter, how the big-money interests and Washington strategists of the Republican Party would receive it. Apparently they thought no one would notice! Their pell-mell retreat from the law’s most egregious features, in the face of opposition from Walmart and Nascar and the NBA and Arnold Schwarzenegger and virtually the entire American business world, no doubt felt satisfying to many progressives. A bunch of dumbass zealots in a flyover state overplayed their hand and got slapped down by capitalism; the long arc of history tends toward justice, and so on.

But the longer we stare into this particular crystal ball, the murkier the picture becomes. It’s easier to mock those who seem stupid and evil than to consider how they got that way, whether their deranged understanding of the world holds any truth, and what the long-term consequences of their alienation and bitterness are likely to be. Somebody elected those Tea Party legislators in Indiana, and if they weren’t doing the bidding of the GOP’s power brokers they were sure as hell honoring the wishes of its base. They represent an entrenched, exurban and politically active white Christian minority that feels deeply uncomfortable with nearly every aspect of contemporary American society, and that increasingly understands itself as a disenfranchised and persecuted identity group, in a perversion or appropriation of terms invented by the left. That group is highly politically engaged and in broad terms is delighted to vote in terms of its perceived group interests – and in defiance, as we have observed for decades, of its objective economic interests. Why that group is so deeply invested in the right to deny pizza to gays I don’t claim to understand – it’s another symbolic erosion of an imaginary grade of American normalcy that only existed in commercials, or something like that. But many members of that tribe correctly identified the O’Connors as kin, and embraced them after they went through the pillory of social media.

If you’ve been following this bizarre story, you already know that the conservative counterattack took tangible form in a GoFundMe campaign originally intended to raise $25,000 for the O’Connor family. It was finally suspended on Friday after raising a grand total of $842,637, nearly all of it in small individual donations. (Purely on the level of strategy, shouldn’t they have pushed onward to $1 million?) That’s both heroic, or mock-heroic, and deeply pathetic. It’s a sum much too small for actual politics, but a needlessly large one to fling at the proprietors of a pizza parlor for reasons no one can explain. A pizza parlor that has apparently never denied service to anyone based on perceived sexual orientation, by the way, and also has never catered anyone’s wedding. (Because who serves pizza at a wedding? And if you wanted pizza at your wedding in Walkerton, Indiana – which would be a really good indication that you’re not gay – would you order it from a place called Memories Pizza?)

That $842,637, as I see it, is where the real meaning of the hate-pizza counterrevolution lies. Each $10 donation contained within that middling-impressive sum is like a condensed droplet from the deep pool of alienation and bitterness in heartland white America, a symbolic blow struck against bicoastal liberal condescension and phony corporate conservatism alike. One partial truth revealed by pizza-hate-gate is the philosophical incompatibility of the warring camps within the Republican Party. While the CEOs and zillionaires who drive GOP economic policy depend on the votes of culture-war believers, they have never cared about the core issues of Republican base voters in any fundamental way, and in this case have turned their backs entirely. Capitalism concluded long ago that anti-gay bigotry was bad for business. The LGBT community remains a key growth market, and the spread of same-sex marriage represents an enormous business opportunity. How do the numbers of florists and couturiers and events planners and DJs hungry for a slice of that rainbow-flag cake compare to the dusty handful consumed by religious angst? Money talks; the Bible walks.

Now the bewildered O’Connor family gets to reopen their pizza parlor or take a permanent beach vacation or buy a time machine back to the pre-gay 1950s. But their disaffected and self-ghettoized Caucasian tribe will be with us to years to come, and is likely to wield disproportionate power into the indefinite future. As long as those people feel neglected and unheard – derided by their enemies on the left, alternately pandered to and frozen out by their supposed allies on the right – they will remain a toxic and destructive force in American politics. I'm not saying there's some easy fix to this problem or that we need to give them a hug, although ultimately the answer is something like, "No, you don't have to like gay people, or marry them. But you do have to sell them your damn pizza if they want it." Liberals should not feel unduly comforted, however, by demographic trends suggesting their inevitable victory in the culture war. For one thing, we’ve been hearing that for 20 years and it hasn’t happened. For another, they face dug-in opponents would rather burn down the house than surrender. And who says the right is losing, anyway?

Yes, Indiana’s ill-fated anti-anti-discrimination measure had something of a Custer’s Last Stand quality. In Mike Pence’s hasty retreat and ruined presidential hopes, in the monolithic opposition of corporate America and in Schwarzenegger’s Washington Post Op-Ed, we see that the smart money in the GOP understands that the marriage equality issue is all but settled. If Republicans ever want to elect a president again, they must shed their image as gay-haters. (That’s not the only reason they have almost no plausible road to victory against Hillary Clinton next year, but it’s a pretty big one.)

But you won’t find Wal-Mart or Nascar or the Indiana Chamber of Commerce objecting to the grotesque sentence of Purvi Patel, who may or may not have taken a mail-order abortion drug – which would have been legal if prescribed by a doctor – and may or may not have given birth to a baby that was briefly alive. Very little is clear about the disputed facts of Patel’s tragic story, except this: No matter what personal mistakes she may have made or what laws she may have broken, she became the guinea pig for an Indiana law designed as a stealth attack on reproductive rights, and her case illustrates how successful abortion opponents have been in eroding those rights and criminalizing women’s relationships to their own bodies.

None of the forces slowly driving the Republican Party towards an accommodation with LGBT rights are in operation here. Public opinion on the entire constellation of moral and legal issues we call “abortion” is murky and troubled, in large part because it has been rendered so by a long-term ideological assault aimed at stripping away rights and closing down clinics in state after state. Most Americans still broadly hold pro-choice views, majority support is relatively tepid and framed in "yes, but" terms, especially compared to the fervent convictions of the devout minority who see abortion as genocide or mass murder. If the corporate powers behind the GOP see immense profits in LGBT commerce and same-sex marriage, abortion is a capitalism buzzkill: It makes no one happy and they’d rather not think about it.

On one hand, women are now found at all levels of the workplace, and they often insist on having healthcare that covers all aspects of their lives, including deciding when or whether to have babies. On the other hand, the bargain Big Capital has made with the Republican base requires going along with the party’s bedrock opposition to abortion (or at least pretending to). As Emily Bazelon wrote this week in the New York Times Magazine, it’s tempting to view the Patel case as an outlier, a bizarre tragedy with no precedent and no consequences. But it’s not. It’s a major culture-war victory for the right, coming at a moment when the right seems to be in disorder and defeat, and its insidious effects will linger long after the odor of Memories Pizza has faded.