Since the Great Recession, it has been open season on the country's poor. Here are just a few of the lowlights 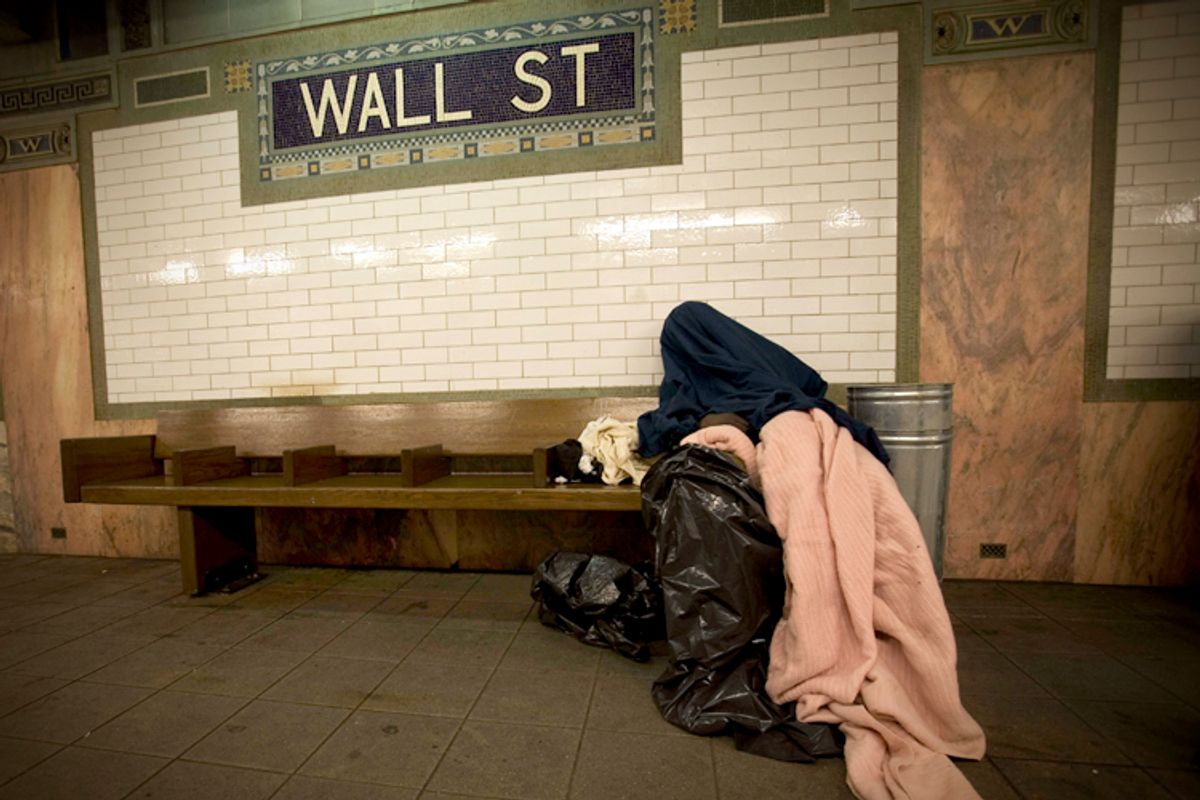 There's a scene in the 1935 film adaptation of Charles Dickens’ novel A Tale of Two Cities in which a horse-drawn carriage transporting a hated aristocrat runs over and kills a peasant child—and instead of expressing any remorse over the boy’s death, he's worried that the boy might have injured his horse. It’s a powerful scene that speaks volumes about class oppression and the indifference that the 1% can have for the suffering of the poor. History has a painful way of repeating itself, and in 2015, it is open season on the working class and the poor in the United States. After the crash of September 2008—which brought about the U.S.’ worst economic crisis since the Great Depression of the 1930s—the American working class desperately needed a vigorous New Deal 2.0. Instead, the Great Recession has brought us bank bailouts, corporate welfare, megabank mergers, deepening inequality, the U.S. Supreme Court’s disastrous Citizens Uniteddecision and Republicans in Congress who are determined to shred America’s social safety net as much as they can.

In this toxic economic environment, there are countless incidents of the haves kicking the have-nots when they’re already down. From Republican attacks on food stamps, Medicare and social security to mass incarceration to modern-day debtors’ prisons, the assault on the American working class has been relentless during the Great Recession. And one need only read the history books to understand the type of unrest that eventually occurs in such an environment.

Below are seven disgraceful incidents from 2014 and 2015 that show a “throw the peasants in the Bastille” mentality and say a lot about the cruel economic times we are living in.

In Portland, the courts spent months prosecuting a homeless woman for—of all things—using an electrical outlet in a sidewalk planter box to charge her cell phone in July. The woman, who the website Street Roots News identified as “Jackie” (she didn’t want her real name used), was charged with theft. And when “Jackie” missed her arraignment (she was homeless, after all), a bench warrant was issued. Months later, she turned herself into police and spent a night in jail. “Jackie” (who had never been arrested before) was offered a plea bargain, which she turned down because she was on a waiting list for housing and feared that having a criminal record would jeopardize her chance at putting a roof over her head. Eventually, the theft charge was dropped, but the very fact that “Jackie” was arrested and prosecuted in the first place shows that the “throw the peasants in the Bastille” mentality is alive and well in the U.S.

Supposedly, the U.S. doesn’t have debtors’ prisons. But when Americans are jailed because they cannot afford to pay court fines and fees for minor infractions, that amounts to a modern-day version of the debtor's prison. In December, 19-year-old DeKalb County, Georgia resident Kevin Thompson spent five days in jail when he couldn’t afford to pay, within 30 days, $838 in fines and fees related to a traffic ticket. On January 19, the American Civil Liberties Union (ACLU) filed a lawsuit on Thompson’s behalf, arguing that debtors’ prisons are unconstitutional and that he was criminalized for being poor. And on March 18, a settlement was reached. Thompson v. DeKalb County was an important case because—as ACLU members have noted—what happened to Thompson was not an anomaly, but rather, exemplified a disturbing trend of jailing the poor for their inability to pay court fines and fees. The ACLU, in fact, was speaking out against this type of class oppression back in 2010, when it issued its report In for a Penny: The Rise of America’s New Debtors’ Prisons.

3. Sanitation Worker in Atlanta Suburb Jailed for Showing Up Too Early

Trash collection is not an easy job, but it’s certainly an important and necessary one. In Sandy Springs, Georgia, however, doing that job too well can result in a jail sentence. Trash collection has been totally privatized in that Atlanta suburb, where a city ordinance says that trash cannot be collected before 7 AM—and when Kevin McGill (who worked for a private company called Waste Management, Inc.) recently showed up just after 5 AM to do his job, he was arrested. In early March, McGill was sentenced to 30 days in jailbecause the local prosecutor insisted that a fine would be insufficient punishment. Welcome to the Tea Party’s America, where blue-collar workers are sentenced to jail for having a strong work ethic while corrupt banksters and Wall Street oligarchs who cause widespread suffering operate with impunity.

4. Activists Arrested in Fort Lauderdale for Feeding the Homeless

In November 2014, the National Coalition for the Homeless released a report titled Share No More: The Criminalization of Efforts to Feed People in Need—and the report found that since 2013, over 20 cities have passed laws that restrict feeding the homeless in public. One of those cities is Fort Lauderdale, Florida, which has a law stating that one can give food to the homeless only in designated locations. The same month that study was released, 90-year-old Arnold Abbott (who heads an all-volunteer organization called Love Thy Neighbor) and two local pastors (Mark Sims and Dwayne Black) were arrested for feeding the homeless in violation of Fort Lauderdale’s law. And in Fort Lauderdale, the penalty for that offense can be a $500 fine and up to 60 days in jail. Laws like the one in Fort Lauderdale not only criminalize people for being poor—they also criminalize people for helping the poor. But Abbott’s supporters are fighting back: in February, the organization Food Not Bombsfiled a lawsuit against the City of Fort Lauderdale, arguing that the law is unconstitutional.

In its 1983 decision in Bearden v. Georgia, the U.S. Supreme Court ruled that Americans who owe court fines and fees cannot be incarcerated for nonpayment if they genuinely lack the ability to pay. Someone who has the ability to pay, the High Court ruled, must pay, but jailing those who don’t have the money constitutes debtors’ prison (which was outlawed in the U.S. before the Civil War). And in February, a group of civil rights lawyers (including members of Equal Justice Under Law and ArchCity Defenders) filed a lawsuit against the City of Ferguson, Missouri and nearby Jennings on behalf of 11 plaintiffs who assert that when they were jailed for non-payment of fines or fees, the courts did not adequately take into account their ability to pay. In February, attorney Alec Karakatsanis (who co-founded Equal Justice Under Law) told NPR: “We’ve seen the rise of modern American debtors’ prisons, and nowhere is that phenomenon more stark than in Ferguson and Jennings’ municipal courts and municipal jails.”

The Catholic Church has plenty of activists who go to great lengths to help the disadvantaged: in Philadelphia, for example, Sister Mary Scullion (a famously charitable nun in that city) has been aggressively fighting for homeless rights since the 1970s. And the fact that someone like Scullion has done so much good work makes it all the more disheartening to know that up until recently, the sprinkler system of St. Mary’s Cathedral in San Francisco was being used to soak homeless people who were sleeping around the church. When a report by San Francisco’s KCBS-AM (an all-news station) brought that information to light, the San Francisco Archdiocese was rightly embarrassed and, on March 18, announced that the sprinklers were being removed. Paul Boden, organizing director of the Western Regional Advocacy Project (a coalition of groups that help the homeless on the West Coast), put it best when he told SFGate that the soaking of the homeless at St. Mary’s was “symbolic of how dehumanizing we’ve become as a society about homeless people.”

One can tell a lot about a country by the way it treats its most vulnerable residents, and Abreham Zemedagegehu (a Washington, DC-area man who is both homeless and deaf) is suing the Arlington County Sheriff’s Office in Virginia because of the treatment his attorneys say he suffered last year. Zemedagegehu’s ordeal began in February 2014, when he sought shelter from the cold in Ronald Reagan National Airport and was arrested for stealing a man’s iPad. The man later found his iPad, which proved that Zemedagegehu hadn’t taken it. But Zemedagegehu, who cannot speak and only understands sign language, alleges that he had a hard time understanding what was going on when he was in jail for six weeks and had inadequate access to interpreters (a violation of the Americans with Disabilities Act of 1990).