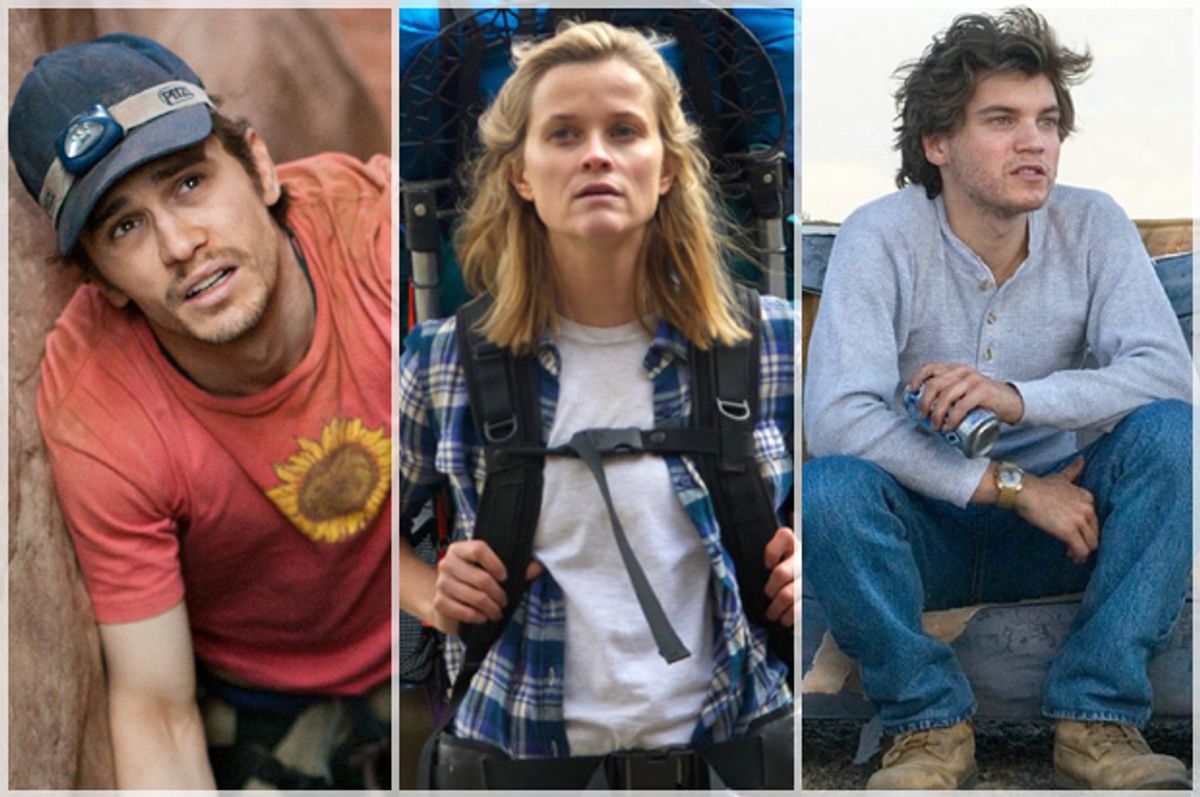 Sometimes cinematic epiphanies occur close to home — take Noah Baumbach’s new film “While We’re Young,” which offers his married middle-aged couple (played by Ben Stiller and Naomi Watts) a series of illuminating lightning-bolt moments courtesy of their odd friendship with a twenty-something hipster couple who reminds them of who they once were and can’t really be again. But sometimes people need to find themselves elsewhere, like when Jack Kerouac famously chronicled his wanderlust in “On the Road.” Escaping on a journey to a far-flung corner of the earth often provides characters in life and films the opportunity to have epiphanies that they can’t necessarily achieve at home. Here are eight films about characters taking journeys of self-discovery.

Director Marshall Curry’s phenomenal documentary that chronicles Matthew VanDyke’s “crash course in manhood.” A middle-class guy from Baltimore, VanDyke decided to take a motorcycle trip through the Middle East and North Africa. He ended up fighting in the Libyan war alongside friends he made during his travels. VanDyke struggles with OCD—he has a strong aversion to sugar—and has to recalibrate his life as he encounters dirty hotel rooms or spends a stint in a prison cell. In “Point and Shoot” Curry shrewdly melds his interview with VanDyke with his subject’s own footage to show how he became empowered. It is an exciting, worthwhile journey full of harrowing escapes and escapades. While VanDyke has an epiphany at the film’s climax when he is faced with a life-or-death situation, other moments also resonate. He makes a difficult decision when he chooses to stay and fight alongside his friends in Libya rather than return home to the comfort and safety of the life he left behind. Such episodes indicate how VanDyke’s experiences changed him, and Curry’s exceptional film challenges the viewer to determine how they would respond in the same extreme situations.

In this video clip, Matthew VanDyke’s solo motorcycle ride offers him the exhilarating chance to have the adventures he had only seen on TV.

"Point And Shoot" Motorcycle Montage from Marshall Curry on Vimeo.

Based on Cheryl Strayed's memoir about her 1,100- mile trek along the Pacific Crest Trail, alone, “Wild” garnered Oscar nominations for Reese Witherspoon, who plays Cheryl, and Laura Dern for her portrayal of Strayed’s mother. As Cheryl tells a stranger she meets on her journey, “I’m lonelier in my real life than I am out here.” She is escaping from several personal traumas including the death of her mother and the dissolution of her marriage. She acknowledges that her previous coping mechanism of wild behavior—sex with strangers and using heroin—was creating more emptiness than fulfillment.

Cheryl’s journey is not easy. She has several moments of doubt and fear. She meets a stranger she thinks may be shifty, as well as some strangers who actually are. She suffers physical pain (the uncomfortable toenail scene that opens the film), and some crippling emotional despair. But her epiphany comes when she is able to finally let go and have a cathartic cry. Dropping to her knees and wailing is actually far more healing for Cheryl than howling at the sky.

This  compelling indie drama that played theatrically in December concerns a married couple, Peter (Vincent Kartheiser) and Chloe (Olivia Thirlby), who take their honeymoon on an Antarctica trip with a whale researcher (Roger Payne as himself). Peter, a writer, is looking to further his career with Payne’s help. He gets to fulfill his dream by traveling with his mentor, but he only does so on the condition that he can bring his new wife. However, while Peter is enamored with his work and the opportunity of a lifetime to “do something bigger than himself,” Chloe soon feels bored and neglected—especially on the claustrophobic vessel in the middle of the vast Antarctic Ocean. Will she have a dalliance with Captain Emerson (William Campbell)? The couple’s marital crisis is palpable because of Thirlby’s strong, heartfelt performance, and writer/director Scott Cohen’s keen use of the environment to comment on the characters’ emotions. “Red Knot” is captivating as Chloe makes some painful choices and Peter has an epiphany about what he has—or might lose. When the characters realize happiness may not be found among the Antarctic Circle, it is a critical moment in an icy little film.

Here is a clip of Chloe talking with Captain Emerson about the choices one makes in life:

Sean Penn’s adaptation of Jon Krakauer’s bestseller, "Into the Wild," recounts the true story of Christopher McCandless, a.k.a. Alexander Supertramp (Emile Hirsch), as he embarked on a “Jack London fantasy” of rejecting the boundaries and trappings of civilized life and heading into the wild and living off the land in Alaska. This survival tale unfolds as a series of episodes that form a portrait of a young man who just wanted to “disappear for a while.” Depending on one’s perspective, McCandless was either a reckless romantic trying to satiate his wanderlust, or an arrogant guy filled with hubris, unprepared for surviving in the wild. Probably both. But, until his unfortunate demise, Chris achieves a form of personal enlightenment practicing his survival skills, living on his own terms, and finding the ultimate freedom.

Ryan Murphy co-wrote and directed the screen adaptation of Elizabeth Gilbert’s bestseller, “Eat Pray Love.” Liz (Julia Roberts) is a recently divorced woman seeking food, spirituality and sex as she travels to Italy, India and Indonesia, respectively. Murphy’s film has Liz spout platitudes about change and transformation as she “has a relationship with her pizza”—a shorthand approach for doing what she wants, not what she should or is told to do. Although taking control of her life also means taking responsibility for her actions. Liz tries on “big jeans” a few scenes after eating that pizza. Liz also learns from Richard from Texas (Richard Jenkins), a man she meets on her travels, to forgive herself for some of her mistakes. Her newfound sense of self enables her to be open to having a relationship in Bali with Felipe (Javier Bardem), and ultimately decide what she really wants from life.

Watch Liz “have a relationship with her pizza.”

Aron Ralston (James Franco), the hero of “127 Hours,” is a weekend warrior, someone looking for an escape from his daily grind. He doesn’t expect to get stuck in a hard place—literally between two rocks in Blue John Canyon, Utah—but one day he does. His experience causes him to have some moments of self-reflection, nicely captured in his video diary. As the guest of his own morning radio show, he realizes how his selfishness and wanting to do everything on his own landed him in the precarious position he is in; no one knows where he is. “I chose this,” Aron admits with more than a tinge of regret. He acknowledges that the rock that pinned him has been “waiting for him his entire life,” and that every action he made in his life “led up to this.” It’s a heady epiphany that makes him appreciate his life (and his parents) even more once he famously extricates himself from his dangerous situation. However, “127 Hours” is ultimately life-affirming as it chronicles Aron’s near-death experience.

In “Gerry,” two friends—Gerry (Matt Damon) and Gerry (Casey Affleck)—go out into the middle of nowhere to search for “the thing” at the end of the trail. The guys get lost, and have neither food nor water with them. So they walk and walk, and walk some more through gorgeous environments that visually convey how insignificant they are. Do they reach any kind of enlightenment? That is up to the viewer to decide. One wag has called Gus Van Sant’s film an “existential ‘Dude, Where’s My Car?’”

See Gerry and Gerry realize they are lost.

While most characters trying to find themselves travel to the middle of nowhere to be alone and introspective, Anna (Jessalyn Gilsig) the heroine of writer/director Jeremy O’Keefe’s fabulous, underseen drama, takes a different route to self-discovery. Frustrated with her marriage, her family, her job and other personal issues, Anna decides on a whim to run away from her life in Wilmington, Delaware. Taking money from a botched convenience store robbery, she heads to Maine, eventually breaking into the summer cottage from her childhood with Danny (Graham Patrick Martin), a charming stranger she meets along the way. Anna is a complex woman, and watching her unravel (literally and figuratively) as she takes stock of her life, makes bad decisions and owns up to her reckless behavior is fascinating. Anna has moments of innocence and clarity in “Somewhere Slow” that are quite revelatory. It is watching the fragile Anna develop her sense of self-confidence—Gilsig is terrific—that makes O’Keefe’s film so gratifying.

In this clip, “Contribute” from “Somewhere Slow,” Anna shows both naïveté and knowledge in an encounter with Danny.

Ultimately, these epiphany films consider the question raised in the film “My Dinner with Andre,” which asks, “Is there any more reality on the top of Mount Everest than there is in the cigar shop next door?” Perhaps viewers have to see these films to decide.