Jon Hamm, real-life mad man? His dark frat boy past, and a shocking college incident, catches up with him

A violent hazing comes to light, and fans recoil at the idea the affable, cool star could have a disturbing past 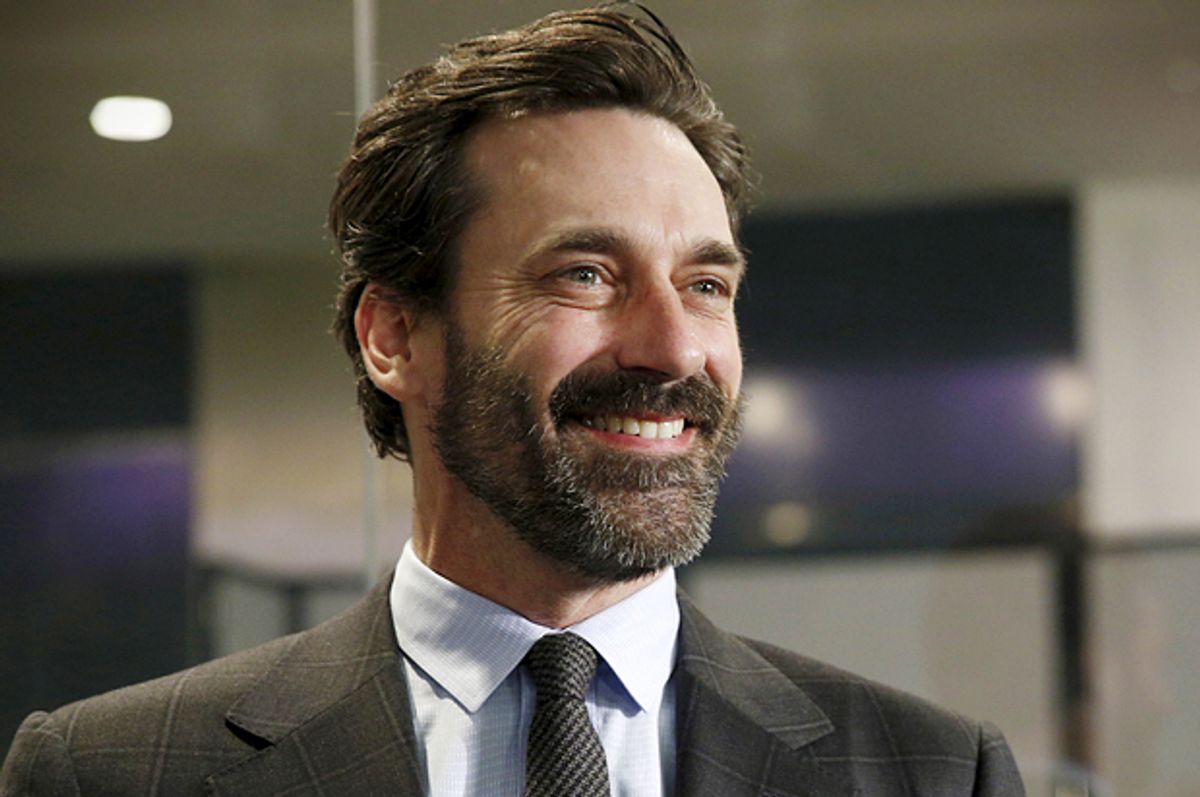 Well, this might at least partially explain the stint in rehab. Could Jon Hamm's recent completion of a 30-day program for alcohol abuse have had something to do with the revelations this week regarding a violent hazing incident at the University of Texas 25 years ago?

A report in The Star revealed that in November 1990, Hamm, then a 20-year-old sophomore, was arrested for his participation in a series of deeply disturbing fraternity events. In a 1991 lawsuit by former Sigma Nu pledge Mark Allen Sanders, Sanders said he'd been "severely beaten, dragged by a hammer and had his pants lit on fire." In his suit, he contended that Hamm became "mad, I mean really mad" at him when he failed to correctly recite material they'd given him to memorize. "[Hamm] rears back and hits me left-handed, and he hit me right over my right kidney, I mean square over it," he alleged. "Good solid hit and that, that stood me right up."

Sanders claimed he needed medical attention afterward and withdrew from the school. The lawsuit was dismissed in 1993, but the fraternity chapter was permanently disbanded, and a 1991 AP report notes that four other fraternity members were sentenced for hazing after pleading no contest. Travis County Attorney Ken Oden said at the time that ''What you see today is escalating punishment for the organizations and the individuals, and if the problems persist, the punishments will continue to escalate." Hamm, meanwhile, was ultimately charged but not convicted of hazing, receiving "deferred adjudication" for completing probation. An assault charge was also dismissed.

The idea of Hamm as a vicious frat boy is so far out of whack with the affable, self-deprecating Salon's sexiest man of 2007 image he has cultivated so long, fans were shocked at the bombshell. Neither Hamm nor "Mad Men" creator Matthew Weiner have yet commented on the incident, nor has Sanders. It will be interesting to see what, if anything, Hamm ultimately has to say about what happened.

And while there's zero excuse, ever, for physically and emotionally abusing another human being, you do have to wonder not just about the episode but the circumstances of the participants. For Hamm, his sophomore year at Texas was a painful one. He'd gone to the school on an academic scholarship after a youth he has described "difficult in the best of circumstances." Less than two months after the hazing incident, his father, who says "was a drinker – for a long time — died of diabetes. He recalls his father as a man who "had a dark side to him. He was a sad guy."

After his father's death, Hamm left Texas and came back home to finish school at the University of Missouri. In a 2012 interview, he said, "I very much knew what the idea of permanence was by that point. I dropped out of school, moved into the basement of my older half-sister Julie’s house, enrolled in a local college and sank into depression. It was the classic definition of clinical depression; you want to stay in bed all day, you sleep till four o’clock in the afternoon. I didn’t have any drive to get up and do anything. It was rough: it stinks."

What Hamm and his classmates are accused of doing in 1990 is horrific, and no doubt seriously traumatic for the pledge at the center of it. But a 45-year-old man who's just come out of a treatment program is not a 20-year-old kid whose father is dying and en route to a serious bout with depression.

Hamm, the man with easy charm who looks so good in a suit, was never Mr. Perfect. I seriously doubt he's a monster either. He's a former frat boy who seems to have done some dark deeds. And if he never deserved a pedestal, he doesn't deserve to be judged by who he was at his worst either.