Too many limes: Why Gwyneth's SNAP challenge is a bust 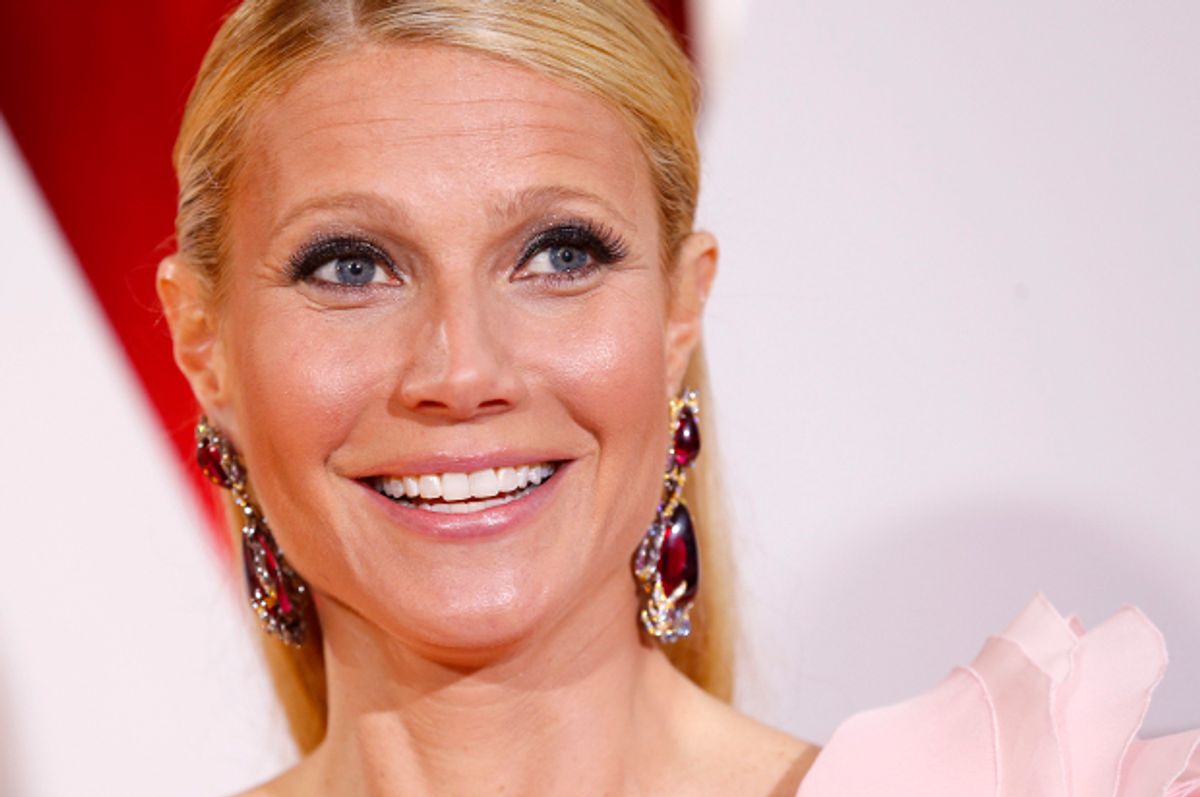 Gwyneth Paltrow is not like the rest of us. She is the daughter of a successful Hollywood actress and producer. She has an Academy Award and an Emmy and has had sex with Brad Pitt. She didn't just marry the guy from Coldplay, she consciously uncoupled from him. She is an entire lifestyle industry. And when she wears pretty dresses or talks about her hair, or recommends steaming your vagina, she is in the zone. But when she attempts to be relatable, it's a little like when, in the movies, the space alien tries to emulate human behavior. Like last month when she unnervingly announced, "I'm incredibly close to the common woman in that I'm a woman and I'm a mother and we all are in a physical body with beating hearts with compassion and love we are all seekers." The latest example? Her strange foray into food stamp-budget dining.

Paltrow is the latest high-profile figure to take the SNAP challenge — a hunger awareness initiative that invites participants to experience what it's like to live and eat for seven days on the amount a person on his or her state's Supplemental Nutrition Assistance Program would have to budget. On Thursday, Paltrow announced she's doing it as part of the Food Bank NYC fundraising challenge, after being nominated by her buddy Mario Batali. And to kick off, she tweeted a photo of a paltry array of groceries and said, "This is what $29 gets you at the grocery store—what families on SNAP (i.e. food stamps) have to live on for a week." Let the latest round of Paltrow judging begin!

Jezebel quickly mitigated Paltrow's act with the observation that "Gwyn still gets to cook her $29 food in an expensive outdoor oven, have access to the world’s best healthcare and sleep in a mansion."  The Washington Post, while noting that her heart may be in the right place, observed of her grocery haul that "The spread looks more like it was concocted to be featured on a glossy Instagram or Pinterest page than to actually provide nutrition. And like everything Paltrow does, it seems to be imbued with evidence of her extravagant wealth." Perhaps Time expressed it most pithily, with writer Darlena Cunha's assertion that Paltrow's experiment is "poverty tourism." "There is nothing about poverty that one week can teach anyone with a safety net in place," she writes. "It’s a game."

But is the objection here to the SNAP challenge itself, or to how Gwyneth is conducting it? When Cory Booker did the challenge in 2012, he was far more generously lauded for his "immersion politics."And I can attest that when my children and I did it two years ago, it wasn't because we were play acting at poverty — we were genuinely attempting to understand more about how we as Americans feed ourselves, and how we can work together to be better at it. It was about imparting skills and understanding the high cost of our culture's astonishing  wastefulness. We didn't go into it expecting to eradicate hunger, but we did raise a little money and we did come away with deeper empathy. I have no regrets about doing it and wouldn't hesitate to encourage others to try it.  It's one thing to snark on Gwyneth — and God knows, I can and often do — it's another to put yourself out there and try something that may be difficult.

The problem with Gwyneth's way of going about the challenge is that she's doing it in her usual, not-quite-of-the-planet-the-rest-of-us-inhabit way. Girl can cook. But she quite obviously has no idea how to shop. Maybe she never has? As just about everyone who's seen that photo of what she thinks someone living on $29 a week would eat has observed, a world of no. WHY ALL THE THE LIMES, GWYNETH? Her grocery bag might make sense for an actress doing a cleanse, but most women with a physical body with beating hearts would be gnawing their arms off by the second day. One sweet potato? Really? And how expensive were these items that she got so little bang for her buck? It's called Trader Joe's, Gwyneth. They have them in L.A. Note how, in contrast, when Cory Booker did the challenge, he shared his miscalculations and frustrations along the way, exposing some real vulnerability and humor. Gwyneth, retreating into her out of touch rich girl persona even as she's subsisting on black beans and limes, limes, limes, seems to have thrown in the towel straight out of the gate. And that is what seems a great missed opportunity.

Paltrow writes and talks about food all the time. She could have, if she'd given it thought and a sense she actually wanted to commit to this thing, hunkered down and thought, "If I really had to feed myself on so little money, how could I do it? How creative could I be about it?" Instead it feels like, gosh, take away her expensive juice cleanses and she's really hobbled.

Writing in Oxford American this week, Chris Offutt has a beautiful and bold essay about "Trash Food," and the way we impose so much shame on poverty and the way people living in poverty eat. It doesn't help the real problem of hunger to halfheartedly throw a bunch of limes at it. (I would love to see what Martha Stewart — patrician yet resourceful as hell — would do with the SNAP parameters.) Eating well should not be something that you can only do if you have a lot of money. There has to be a conversation about how to do it when you don't. There has to be education around that. There has to be less ignorance around cooking, and greater respect for humble ingredients. Paltrow could have chosen to be part of that, instead of taking a picture of a bag of peas. And the next time she says she's "walking in their shoes to see how far we get," she might want to give more thought to who "they" really are.