Rubio's Iran fiasco: Break faith with our allies because "national security" demands it!

Rubio's fed up with leaders who betray our allies -- so why is he planning to do that on day one of his presidency? 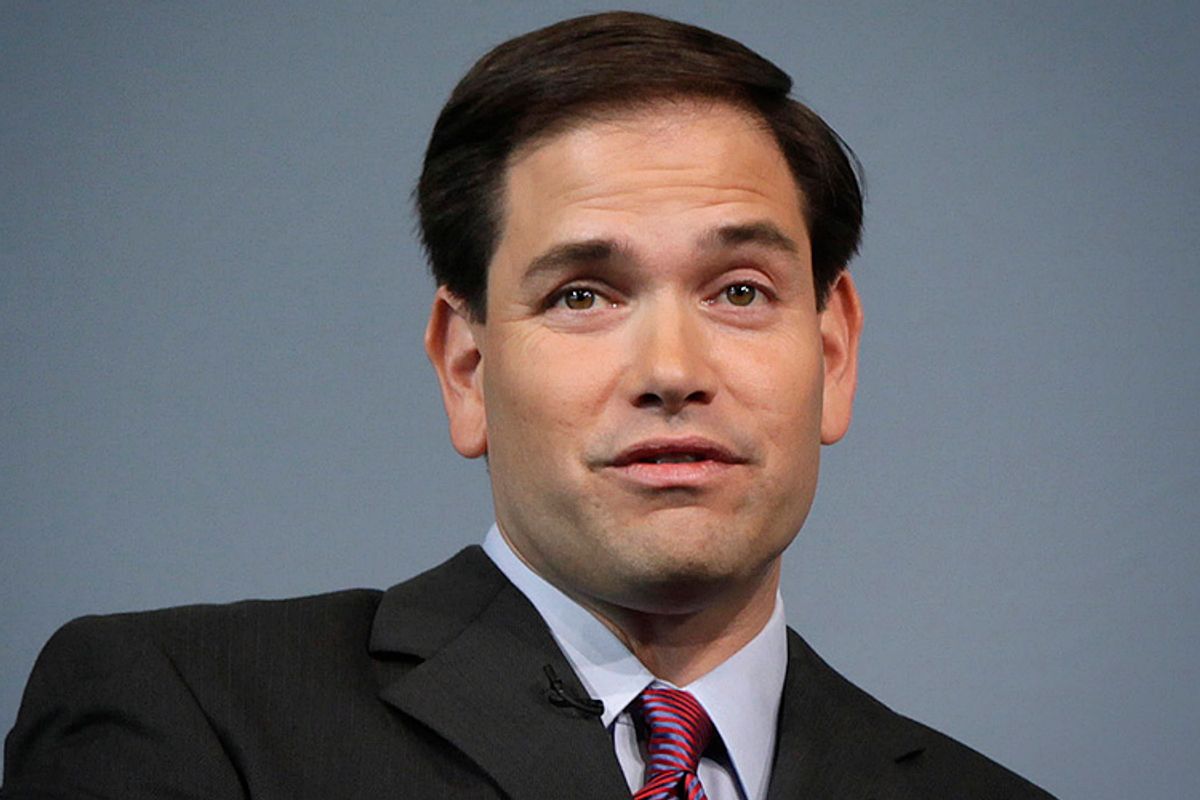 Marco Rubio is, according to Marco Rubio, a foreign policy wunderkind. Having been boxed out of all the other ready-made candidate categories for 2016 – Jeb’s the establishment guy, Cruz is the Tea Party shaman, Walker’s the conservative “results” person, etc. – Rubio’s pinning his appeal on his “unique” marketability and, we’re told, a preternatural mastery of everything related to national security. His foreign policy positions aren’t noticeably different or more nuanced than those of the other 2016 GOP hopefuls – Rand Paul excluded – but I guess he’s banking on the fact that a field full of freshman senators and governors will allow him to come off as more serious and studied in the ways of the world.

The problem for Rubio is that he’s often wildly inconsistent when it comes to foreign policy. Last September, when President Obama first announced his strategy for taking on the Islamic State militarily, Rubio took up at least four distinct positions on the president’s plan in less than week, alternating between cautious support and outright mockery as he pushed his own plan for taking on ISIS (which was indistinguishable from the president’s).

And then there’s Iran. Rubio made some news a few weeks ago when he proclaimed that, were he elected president, he’d pull out of the multilateral diplomatic agreement on Iran’s nuclear program, on day one of his administration. Rather than pursue diplomacy, Rubio vowed that he’d “unilaterally re-impose more crushing and additional sanctions” on Iran and “use the standing of the United States on the global stage to try to encourage other nations to do so.” As my colleague Jim Newell pointed out at the time, that makes literally zero sense. The U.S. can’t put “crushing” sanctions into place without buy-in from the international community. And since he’ll have broken faith with our EU allies, Russia and China by unilaterally tearing down the diplomatic framework with Iran, the U.S. would have no “standing” to pressure those nations into supporting a new sanctions regime.

It was a strange argument coming from someone who’s supposed to be tuned in to the finer points of foreign policy. When Rubio sat down with NPR on Monday to talk about his brand-new presidential candidacy, Steve Inskeep brought up the Iran question again, and Rubio offered a slightly different explanation for what would happen on day one of the Rubio administration.

After Rubio reiterated that he’d abandon the Iran deal in favor of new sanctions, Inskeep pointed out that those sanctions wouldn’t really work without support from our allies. Here’s how Rubio responded:

RUBIO: Yes, it wouldn't be as effective, obviously. We would, ultimately, I think, the Europeans are going to have a test anyway because the Iranians are going to violate the sanctions at some point. They're going to evade it either by trying to take advantage of loopholes in the deal, or they'll just flat out evade it because they've always had a secret component to their, to their program. And at that point, they're going to have a huge test on their hands, which is, are they willing to live by the agreement that they even signed on to? But from the United States' perspective, while we want our allies to join us in this endeavor, and certainly sanctions against Iran would be more effective were they in conjunction with our allies around the world, we have to look out for our own national security concerns.

That’s a departure from his previous position that the unilateral sanctions would be “crushing,” and in that way he’s at least showing a little deference to reality. But he’s still arguing for blowing up the deal without giving it a chance to work and instead pursuing a policy that he concedes won’t be effective, and his justification for doing this is because “we have to look out for our own national security concerns.” The potential ramifications of those actions don’t enter into his consideration. “Rubio doesn’t engage with the many consequences that could result from such a unilateral move,” Greg Sargent writes, “as one expert has noted, it would alienate and break faith with European allies, causing untold ripple effects.”

Rubio doesn’t seem to care much at all what our allies’ “national security concerns” are, or what they think of the United States. Incidentally, here’s what Rubio had to say in his announcement speech about the current administration’s (and, by extension, Hillary Clinton’s) foreign policy: “They have forgotten that when America fails to lead, global chaos inevitably follows, so they appease our enemies, betray our allies and weaken our military.”

Indeed, we’d hate to betray our allies. So someone should ask Rubio why he’s planning to do exactly that on the first day of his presidency.