Full of strutting, buffed-up warriors and showboat action scenes, "The Dead Lands" is half trash, half anthropology 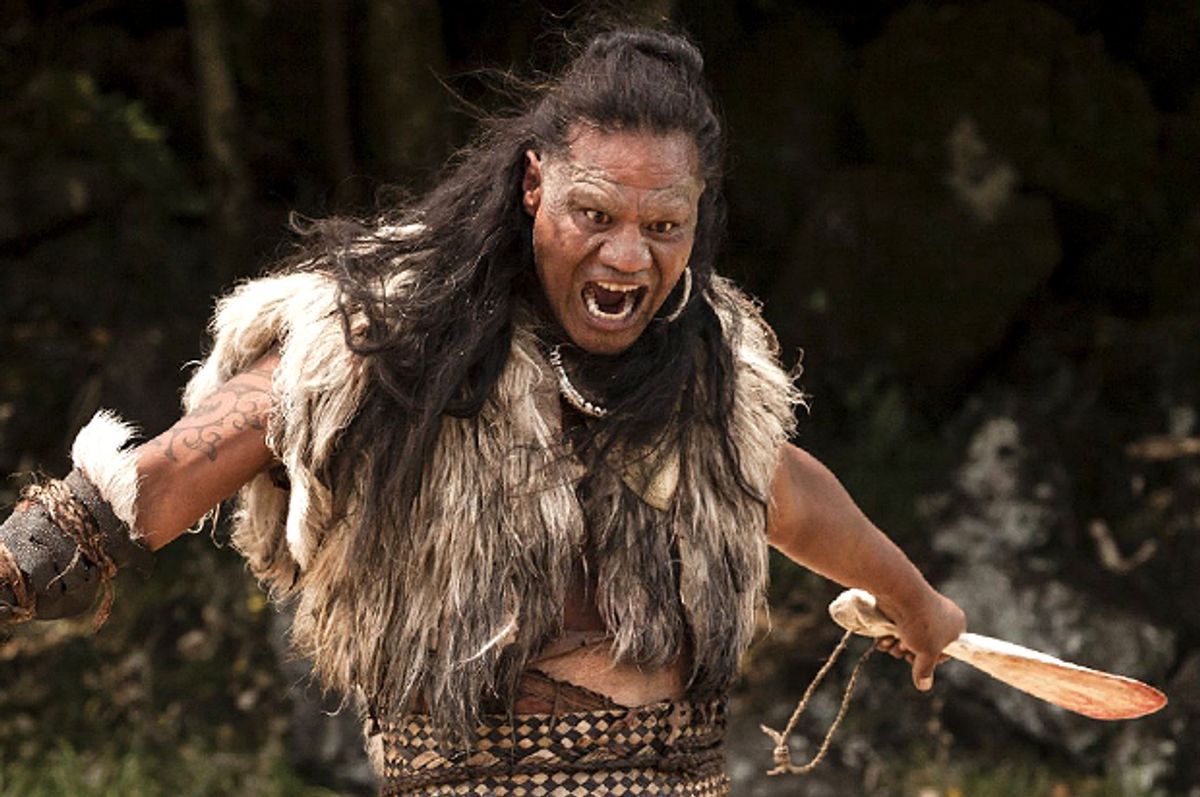 Whatever you want to say about the chaotic action sequences, cartoonish special effects and tattooed beefcake on display in New Zealand director Toa Fraser’s “The Dead Lands,” it’s no good yawning, acting bored and announcing that if you’ve seen one Maori martial-arts movie full of stamping and hooting and tomcat mockery and war-club bloodshed, you’ve seen them all. It’s reasonable to assume that Fraser and screenwriter Glenn Standring paid attention to Mel Gibson’s “Apocalypto” – one of the weirdest works in movie history, made by one of the weirdest people in movie history. But even allowing for that kinship, “The Dead Lands” is a distinctive concoction, part comic-book fantasy, part mythical quest narrative and part cultural reclamation project. (It arrives in the United States with an endorsement from James Cameron, and once you see it that makes a lot of sense.)

Once you get past an awkward and artificial beginning and roll with the movie’s crazy rhythm, “The Dead Lands” is also a blast, and one that delivers an unexpected emotional wallop along with gore, thrills and spectacular scenery. This isn’t the first feature film made entirely in the Maori language (which is often used as an authentic flavor ingredient in Anglophone New Zealand cinema), but there haven’t been many, and I doubt the existing examples come anywhere near the delirious trash quotient of this one. I won’t claim to have seen the Maori version of Shakespeare’s “Merchant of Venice,” made in 2002, but now I really want to. I’m tempted to get distracted onto the undeniably fascinating topic of movies in unusual or obscure world languages – I have seen films in Basque, Welsh, Malagasy, Berber and even Limburgish; I don’t think anyone has ever made one in Romansh – but let’s keep going.

Within the context of New Zealand, this movie’s attempt to connect traditional Maori culture to both Hollywood action spectacles and East Asian martial-arts films may be meant to serve a didactic or inspirational function for Maori youth. But that’s only a guess, and for the rest of us “The Dead Lands” offers an intoxicating journey into an imagined past. This story appears to take place in the islands later known as New Zealand before the arrival of Europeans, but it certainly does not depict that era as one of idyllic peace and plenty. Hongi (James Rolleston), the teenage son of a tribal leader, must embark on a fateful journey of discovery and revenge after his tribe is betrayed and massacred by a rival band led by Wirepa, a fierce and arrogant warrior played by Te Kohe Tuhaka, who has the impressive build and ironic sneer of a Maori Dwayne Johnson.

If Wirepa is one scary dude, he’s not quite prepared for the infamous and possibly supernatural ally that Hongi makes in the “dead lands,” an accursed zone of rainforest and lava field where another now-vanished tribe used to exist. This guy, known only as the Warrior (Lawrence Makoare), has numerous nubile wives and is said to be a monster who subsists on human flesh. He ultimately agrees to help Hongi rather than just eat him, while issuing a dire warning: I’m a bad man who has done bad things. Don’t trust me, and don’t turn your back. Indeed, the Warrior’s dark secrets turn out to be doozies, and even amid the sub-Joseph Campbell macho quest narrative of “The Dead Lands,” I found his tormented struggle for redemption unexpectedly moving.

But let’s be honest: Emotional depth is not the principal selling point of “The Dead Lands,” and neither is its old-fashioned gender politics. (Women appear solely as seductive snares or wise advisors, in the roles pioneered long ago by Circe and Athena.) While early action scenes rely too much on lightning-fast cutting, perhaps to cover for their basic incoherence, Fraser eventually delivers several terrific battle sequences in the gloriously theatrical Maori tradition. Makoare and Tuhaka, in particular, are so much fun when it comes to the crazy-face making, the taunting, the tongue-sticking and all the other bravado and showmanship of Maori combat that I never wanted their characters to meet their gruesome ends. But as the Warrior mutters to one of his numerous adversaries, while impaling him on a sharpened wooden post, “Tell the dead I am coming.”

“The Dead Lands opens this week in Los Angeles, New York, Toronto and Winnipeg, Canada. It opens April 24 in Albuquerque, N.M., and May 1 in Santa Fe, N.M., with more cities to follow. It’s available nationwide on VOD from cable, satellite and online providers.