Hardy's tremendous as a secret policeman after a serial killer, amid the crushing paranoia of Stalin's Russia 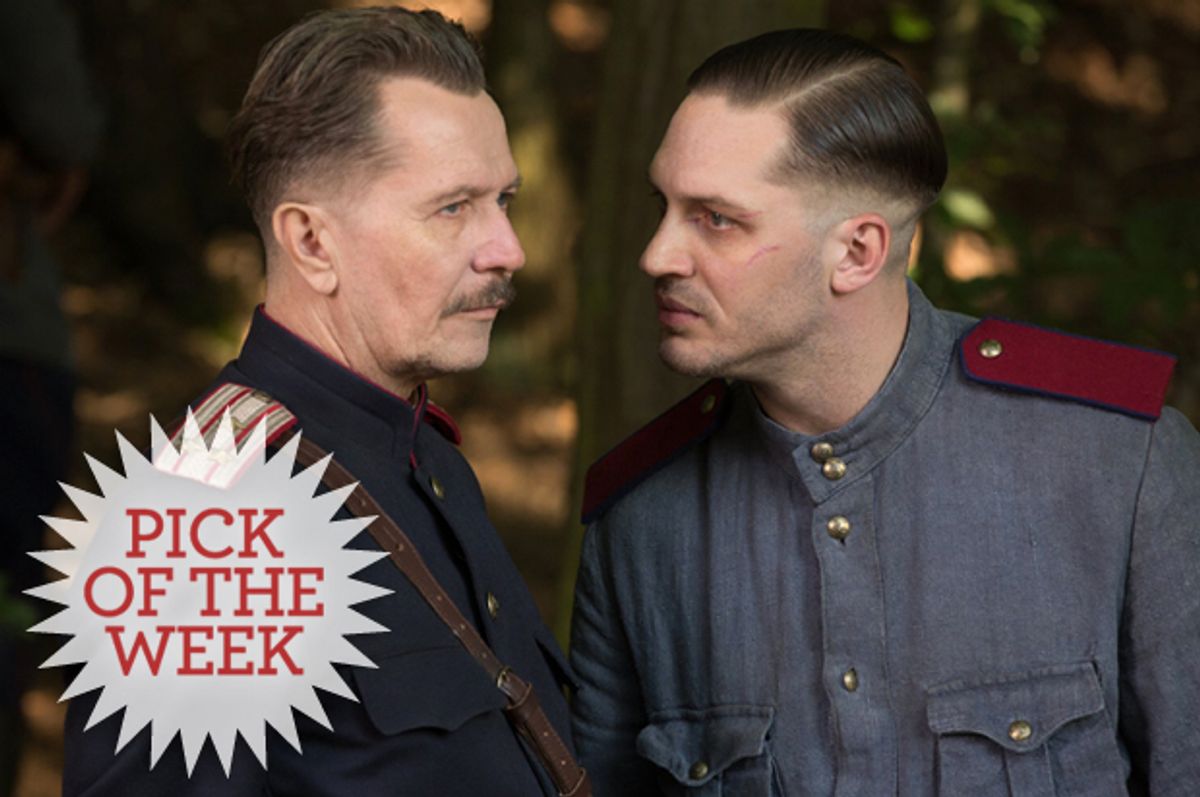 There’s a lot of good and a lot of bad in director Daniel Espinosa’s Soviet-era thriller “Child 44,” an adaptation of Tom Rob Smith’s bestselling novel that’s loaded with international talent and rich with period detail – and delivered in that disastrous “international English” redolent of old-school World War II movies or Yakov Smirnoff routines. (All those gags about how in Soviet Russia YouTube watches you don’t seem quite as funny these days, now do they?) Ultimately I’m going to vote with my heart and say you should see it, largely for the brooding, physical performance of Tom Hardy, an actor still a shade too peculiar for Hollywood stardom, along with the ominous evocation of Stalin’s Russia on the cusp of change. But that recommendation comes with many asterisks, and in various respects “Child 44” is a lost opportunity or, as they teach us to say in film-critic academy, an “interesting failure.”

This is one of those movies where you start to wonder how many drafts the screenplay went through, and who made the final call about how it should be shaped and focused. Veteran novelist and screenwriter Richard Price gets sole credit, but whoever had a hand in this script it never finds the right balance between all the strands of Smith’s novel, which is simultaneously about the hunt for a serial killer, a voyage of masculine self-discovery, a “Doctor Zhivago”-style romance and the unraveling of the Soviet experiment. Espinosa’s direction feels obsessively focused on all the meticulous details meant to capture Soviet reality circa 1953 (the film was primarily shot in Prague and elsewhere in the Czech Republic), and understandably focused on Hardy’s performance as a hulking KGB agent with a newborn conscience, the film’s moral center and most compelling force.

In fact, “KGB agent” is not technically accurate, and there’s a bunch of historical and political context in Smith’s book that has inevitably been jettisoned here. Hardy’s Leo Demidov, a Ukrainian famine orphan turned World War II hero turned secret policeman, is a uniformed officer in the MGB, the immediate predecessor to the KGB and one of the several overlapping or competing security agencies of the Stalinist period. Although bred and molded by the Soviet state, Leo represents the glimmering possibilities of reform that were about to emerge. He dislikes his agency’s penchant for brutality, torture and summary execution, imagines a professionalized police force, and defies the official edict that murder is a crime of capitalism, by definition unknown in the worker’s paradise.

Russian authorities have reportedly canceled the release of “Child 44” in that country, with culture minister Vladimir Medinsky complaining that Espinosa’s film depicts Russia as “Mordor,” populated by subhuman “orcs and ghouls.” That’s an impressive display of cultural awareness from a Putin apparatchik (although I gather J.R.R. Tolkien’s books are hugely popular in Russia), but Medinsky has a point, or maybe three-eighths of a point. There are several things to notice here, and one of them is that the current Russian government really, really does not want to talk about the worst parts of the Soviet past. Another is that while Espinosa may focus on the grotesque and evil aspects of life in Moscow circa 1953, no serious historian would object to the premise that those were abundant. Lastly, there is the strange but true fact that it remains all but impossible, almost 25 years after the end of the Cold War, to depict any aspect of it without veering into propaganda, consciously or otherwise. Or, more succinctly: Soviet history, still thorny; comparisons to Mordor, not without foundation.

When we meet Leo, he’s still a loyal servant of Comrade Stalin and the Communist Party, who has been rewarded with a luxurious Moscow apartment, a limousine and a beautiful wife (Noomi Rapace, of the Swedish “Dragon Tattoo” series). But he has begun to reflect quietly on certain uncomfortable facts, including the fact that the beautiful wife married him only because she was terrified about what might happen to her if she didn’t, and that the regime’s endless, paranoid search for internal traitors and Western agents was entirely unconcerned with actual evidence, let alone questions of guilt or innocence. “Reflect” might be the wrong word to capture the process of change that Hardy plays, which is less about the intellect than about a bone-and-muscle realization that he can’t keep living the way he has been, whatever the cost.

Leo’s refusal to denounce his wife as a spy, and his losing power struggle against a vicious and cowardly fellow agent named Vasili (Joel Kinnaman, the lead in Espinosa’s Swedish hit “Easy Money”), are both personally disastrous and liberating. He’s shipped off to be a low-level militia officer in a grimy factory town, which ultimately allows him the freedom to join forces with a renegade general (Gary Oldman) and investigate the gruesome series of child murders that Moscow has officially declared to be tragic accidents or the results of Western corruption. (Just as there was no murder in the postwar Soviet Union, there was also no homosexuality – and certainly no pedophilia or child abuse.)

But amid the overpowering production design of “Child 44,” which wraps you in a convincing atmosphere of dread flicked with tiny gleams of hope, and all the grace and talent of this cast of world cinema all-stars (which also includes Jason Clarke, Paddy Considine, Vincent Cassel and Nikolaj Lie Kaas), we keep waiting for this gloomy, plodding narrative to shift into high gear and take off. We wait and we wait, and then we get some weird eruptions of violence, in a fast-cutting Hollywood style that seems imported from an entirely different kind of movie. We wait some more, and there are a few desultory efforts at moving the plot along, and then the major characters wrestle in the mud – metaphor alert! – and then it’s over.

There’s an evident devil’s-candy reach at work in “Child 44,” an aspiration toward thrilling and meaningful pop cinema. Given these actors and the ravishing decrepitude of the locations and costumes and the lustrous cinematography of Oliver Wood, I found it more than watchable the whole way through. But the hunt for the killer is a painfully obvious MacGuffin, a convenient avenue for Leo’s moral odyssey, and the movie itself is an “almost” or a “not quite,” a chemistry experiment whose elements refuse to blend. Don’t even get me started on those ludicrous Boris & Natasha accents: Will we be confused about where and when the film takes place if the characters speak normally? Do we believe real Russians talk to each other in garbled English? It’s a conventional solution that profoundly undermines the movie and symbolizes all its shortcomings, and that should hardly be necessary in 2015.

As for Tom Hardy, surely among the greatest British actors of his generation -- and perhaps the most audacious and least conventional – his forceful, frightening performance as an involuntary Soviet Dante continues along his ironic career arc. If you haven’t seen Hardy in the films “Bronson” and “Locke,” or as Heathcliff in “Wuthering Heights” and Bill Sikes in “Oliver Twist” (both of those for the BBC), then, I’m sorry, but you have no idea. He’s the best reason to see “Child 44,” but it likely won’t make him better known on this side of the Atlantic (where he may forever be the mask-wearing, unintelligible Bane in “The Dark Knight Rises”) or help him avoid a Hollywood future playing violent lunatics and action sidekicks. They’ll be awesome, don’t get me wrong. But Hardy deserves better and so do we.