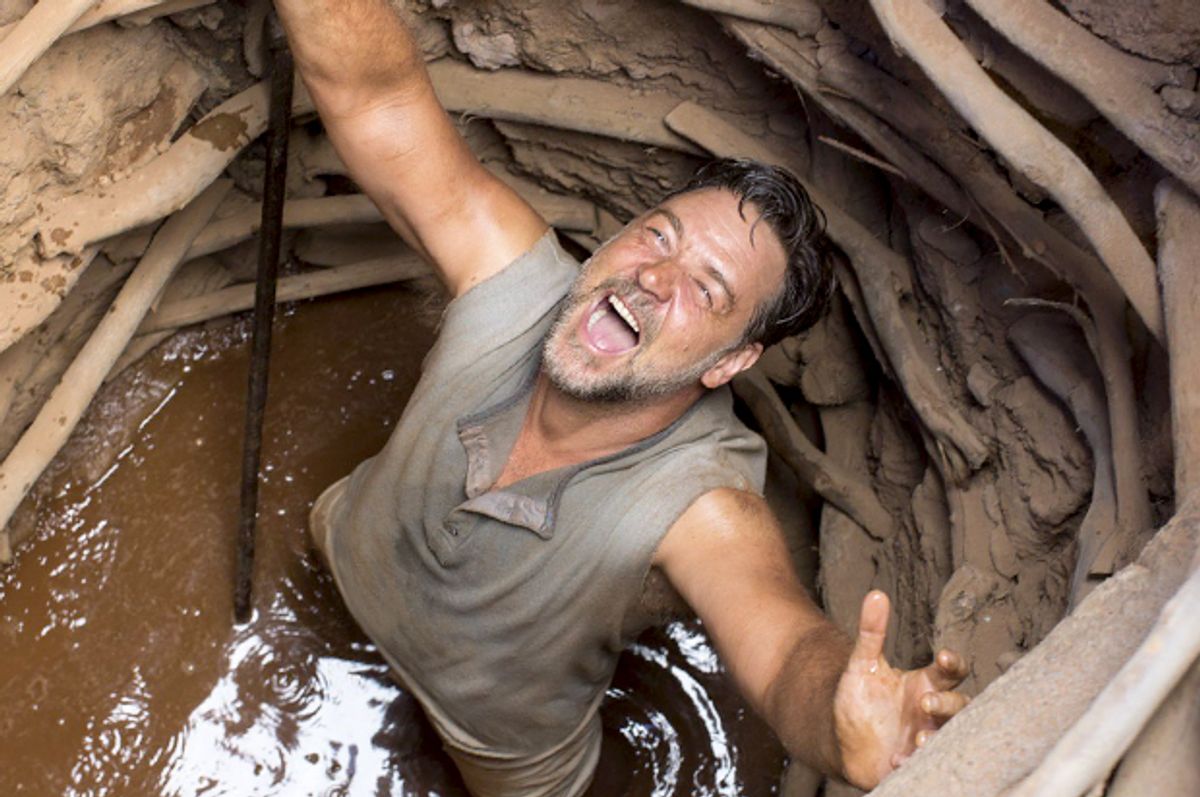 So “The Water Diviner” is a saga of war and fatherhood and beautiful scenery and implausibly hot young Turkish widows. It’s a standard-issue Hollywood blend of Orientalism and sentimentality, roughly two parts romantic adventure, two parts family weeper and one part “war is hell” odyssey. It could have been made in 1985, or even 1965, with no more than a few technical adjustments. (It would have seemed too wide-eyed for 1975.) It might have been nothing worse than that, if it weren't also a shameful and/or oblivious whitewashing of a hugely important historical crime. I'm getting to that, trust me.

This movie marks Russell Crowe’s directing debut, and Crowe himself plays its dogged, lumbering hero, an Aussie rancher who travels to Turkey in 1919 to discover the fate of his three sons, who were presumably killed in the Battle of Gallipoli four years earlier. Crowe is of course Australian, and North American viewers may not understand the extent to which that grueling eight-month campaign thousands of miles away holds an almost mythical importance for Australians (and New Zealanders too) in shaping national identity, thanks to the 10,000 or so Anzac troops who died there on behalf of the British Empire.

There are worse films than “The Water Diviner” in the long and mixed history of movie stars directing themselves, as well as a great many better ones. It feels like a labor of love marked by murky and supposedly benign intentions, but also like a self-flattering vanity project in which Crowe’s character, Joshua Connor, does an awful lot of beaming and twinkling and exuding moral rectitude and good cheer, especially for a guy who has lost his wife and all his children. “The Water Diviner” looks more like an odd career footnote for Crowe, after the pattern of Jack Nicholson’s “Goin’ South” or Bill Murray’s “Quick Change,” than the opening of a new chapter in the Eastwood-Clooney-Affleck model.

Unhappily for the star and director of “The Water Diviner,” there’s a reason this otherwise forgettable film may be remembered as something more than a minor diversion. That’s because releasing this movie now – and arguably making it in the first place, at least in the manner it was made – falls somewhere between epic P.R. failure, massive Hollywood cluelessness and insulting historical cowardice. Let me pause a moment, on the way into this diatribe, to observe that anyone who looks to the movies for historical accuracy is looking in the wrong place. Fiction is called that for a reason, and I have no problem with filmmakers who take liberties with the facts for dramatic purposes. (How accurate are any of Shakespeare’s “history plays,” or the depiction of the French Revolution in “A Tale of Two Cities”?) But what we’re talking about here is something else, something more like basic moral responsibility.

Let me put it this way: If I made a film set in Germany or France or Poland in the 1940s that made no reference to the fate of Europe’s Jewish population in those years – if I appeared unaware that there ever were Jews in Europe, let alone what had become of them – how would that look? What sort of person would you judge me to be, and what sort of point would I seem to be making? Such is the question raised by “The Water Diviner,” a film largely made in Turkey that is being released in the United States on the 100th anniversary of the Armenian genocide – not the approximate anniversary but the precise anniversary, to the day. In a systematic campaign of deportation, starvation and mass murder that began in the spring of 1915, officials of the Ottoman Empire killed between 1 million and 1.5 million Armenians, an event that would later be called the first modern genocide and that shifted the course of 20th-century history, not least because it provided a template for the more ambitious schemes of Adolf Hitler. That event is never mentioned in “The Water Diviner,” not obliquely or indirectly or in any other way; you could easily watch the movie and never know that it happened.

I suppose we have to put this down to blinding ignorance and lack of foresight, but I’m honestly not sure that’s enough. Crowe’s movie is meant to honor the 100th anniversary of the Gallipoli campaign, which began with the Anzac-led amphibious invasion of April 25, 1915. OK, fair enough. Presumably neither he nor anyone else involved with making or marketing “The Water Diviner” paid attention to the overlap with the genocide commemoration. (That historical convergence, by the way, is not a coincidence: Ottoman authorities began rounding up, imprisoning and assassinating leaders of the Armenian community in Constantinople on April 23 and 24, partly because they knew a major Allied assault was coming.)

But at what point does ignorance become willful cooperation in a campaign of lies and propaganda? Crowe and his team wanted to shoot in Turkey, where even a century later open discussion of the “Armenian question” is off limits. And when does solipsism become an excuse for gross moral negligence? It’s not as if “The Water Diviner,” an original script by Andrew Anastasios and Andrew Knight) is entirely ignorant of the tense and complicated history of Turkey during and after World War I. Connor sees Turkish nationalists demonstrating in the streets of British-occupied Constantinople (later Istanbul), and in a wildly implausible later plot twist, he joins a group of nationalist soldiers heading east to fight the invading Greeks and join up with the independence fighters led by the legendary Mustafa Kemal (later known as Atatürk).

Tensions between the rising nationalist movement and loyalty to the defeated Ottoman Empire play a role in Connor’s budding romance with his widowed landlady (the aforementioned hot Turkish widow, played by the exceedingly non-Turkish Olga Kurylenko), whose old-school Muslim brother-in-law hopes to take her on as a second wife. There’s nothing especially shocking about the blend of exotic male fantasy and vague historical verisimilitude in “The Water Diviner,” but the absence of the Armenians, or any conversation about the Armenians, cries out for explanation.

In the real world of 1919, the extermination of Armenians within the Ottoman Empire was widely understood as one of the worst lingering traumas of the Great War. It had sparked worldwide outrage, scholarly investigation and war-crimes tribunals. Within Turkey, before the later curtain of silence descended, it was a source of intense shame and internal debate: The Ottoman Empire’s last Islamic Caliph described the campaign against the Armenians as “the worst stain that has ever disgraced our nation and race,” and the nationalist hero Atatürk repeatedly described the massacres as a “shameful act.” But in this depiction of an Australian man’s journey to Turkey, and his discovery that its people had also suffered frightfully during the war (which is no doubt true) the Armenians of Turkey do not exist and never did.

Is it too harsh to compare “The Water Diviner” to a movie that ignores the Holocaust? Or, to be more specific, to a movie that ignores the Holocaust and is released on Yom HaShoah, the annual Jewish day of remembrance? I cannot answer that question, although I have to assume that Russell Crowe and Warner Bros. did not deliberately set out to insult and anger the Armenian diaspora and its friends around the world, or to participate in covering up a monumental 20th-century crime that shaped the world we live in and remains swathed in too much historical shadow. They disgraced themselves by making this movie the way they did, and then redoubled the disgrace by releasing it this week. They owe the Armenian people and the rest of the world an apology, although I don’t delude myself that we are likely to get one. All we can do for now is consign this film to the oblivion it deserves.