Dr. Oz "will not be silenced," of course: The self-aggrandizing showbiz doc defends himself against attacks

The TV star fires back at his critics 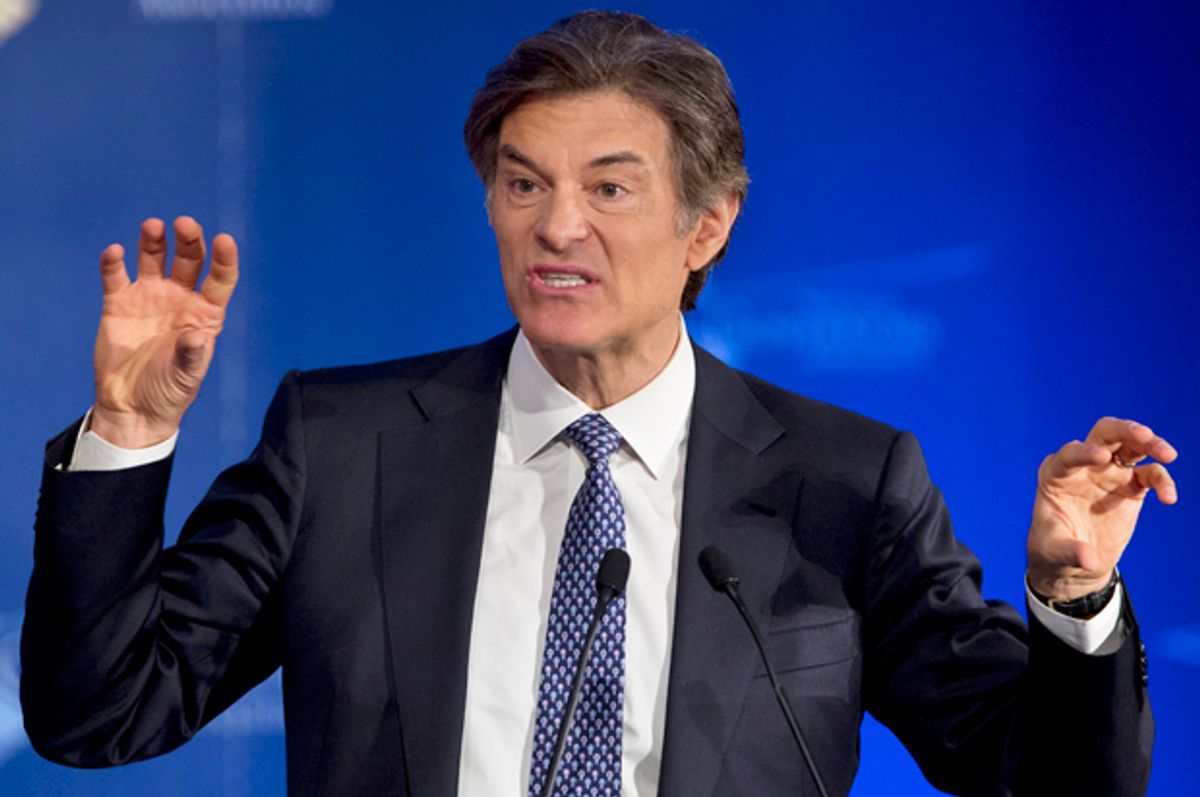 Dr. Mehmet Oz is nothing if not tenacious. No matter how often or how forcefully the 54-year-old author, talk show host, and, oh yeah, heart surgeon is publicly reprimanded for his history of dubious health claims, he keeps on swinging.

Last week, in merely the latest high-profile questioning of Oz's credibility, 10 physicians, surgeons and professors sent a letter to the dean of medicine at Columbia University — where Oz is still affiliated — expressing that they are "surprised and dismayed that Columbia University's College of Physicians and Surgeons would permit Dr. Mehmet Oz to occupy a faculty appointment, let alone a senior administrative position in the Department of Surgery." The strongly worded missive went on to assert that "Dr. Oz has repeatedly shown disdain for science and for evidence-based medicine, as well as baseless and relentless opposition to the genetic engineering of food crops. Worst of all, he has manifested an egregious lack of integrity by promoting quack treatments and cures in the interest of personal financial gain. Thus, Dr. Oz is guilty of either outrageous conflicts of interest or flawed judgements about what constitutes appropriate medical treatments, or both. Whatever the nature of his pathology, members of the public are being misled and endangered, which makes Dr. Oz's presence on the faculty of a prestigious medical institution unacceptable." (The school tersely replied that "Columbia is committed to the principle of academic freedom and to upholding faculty members' freedom of expression for statements they make in public discussion.")

Dr. Oz has been down this road many times in the past few years. In 2013, a New Yorker profile of him noted that "Oz has been criticized by scientists for relying on flimsy or incomplete data, distorting the results, and wielding his vast influence in ways that threaten the health of anyone who watches the show." He's been dinged by the FDA himself for his scary claims about arsenic levels in apple juice while repeatedly welcoming to his show widely discredited, frequently in hot water with the FDA Dr. Joseph Mercola. In 2014, he found himself answering to Democratic Sen. Claire McCaskill and a Consumer Protection, Product Safety, and Insurance committee over his consistent touting of unsubstantiated weight loss ingredients. At the time, McCaskill observed, "The scientific community is almost monolithic against you in terms of the efficacy of the three products you called 'miracles.' I don’t get why you need to say this stuff when you know it’s not true. When you have this amazing megaphone, why would you cheapen your show?" Months later, a study of green coffee bean extract that Oz had previously promoted on his show was retracted. And late last year, the British Journal of Medicine published a study that found that "after paging through the relevant medical research, they found evidence only supported 46 percent of his recommendations, contradicted 15 percent and wasn’t available for 39 percent."

But Dr. Oz, with his TV show and his magazine and his books and his continued esteemed position at vice chair of the Department of Surgery at Columbia, is not a man whose integrity is to be questioned. After the McCaskill hearing last year, he said, "I fill a need to fuel passion in people's lives about what they can do. When I feel as a host of a show that I can’t use words that are flowery or passionate, then I feel that my power has been disenfranchised." And now, in the face of obvious and public disgust from fellow doctors, he's even more defensive. In an opinion piece for Time Thursday, he asks, "Who were these authors and why were they attacking now?" and slams his accusers as having "a history as a pro-biotech scientist" and ties to "a group that has reportedly received donations from big tobacco and food and agribusiness companies, among others."

Look, it's reasonable to question who your critics are and what their motives may be. But Oz's self-sainting narrative, in which he says, "I have spent my entire career searching for ways to lessen the suffering of my patients…. Despite being criticized, I want to continue exploring for myself and my audience.... We will not be silenced. We’re not going anywhere" is harder to swallow than a handful of unregulated diet pills. On his show Thursday, he brought out ally, diet guru and host of luxury "Nutritarian Getaways" Dr. Joel Fuhrman to defend him against his critics and say, "It's ugly. It's an attack against all physicians, all health professionals, all people who don't take a standard party line…. I think it's very important we recognize this as anti American, anti freedom." Hahahahaha. Among Dr. Oz's guests this week: deeply misguided medical expert and former "Three's Company" star Suzanne Somers and dubious "Long Island Medium" Theresa Caputo. Because America! Oz has now proven over years and years and years of complete and utter twaddle peddling that he can build a devout following not as a healer but a TV star who promises "weight loss tricks" and anti-aging breakthroughs. That's not passion, that's not commitment. That's hubris, plain and simple. And plenty of people with no apparent conflict of interest have noticed it too.