Sandra Bullock may someday have a last f____able day, but this isn't it 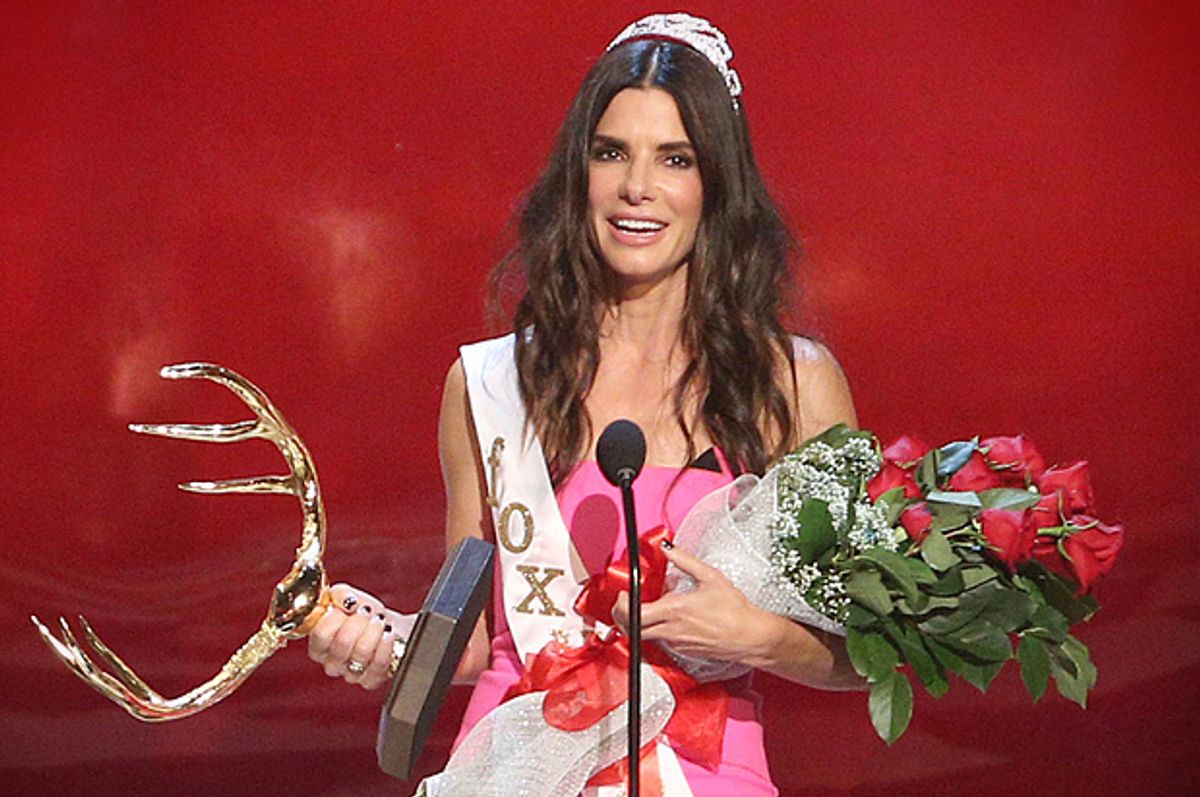 Her name is Sandra Bullock. Not, in case you were confused on this point, "Sandra Bullock, 50." You might not know that, though, based on the headlines that started pouring forth on Wednesday over People magazine's newly crowned "World's Most Beautiful Woman," or the near constant mentions that at a full half-century, Bullock is the oldest woman to attain the achievement. Even NPR led with it. And the subtext is clear — even though this woman is middle-aged, someone somewhere might still want to bang her! You go, girl!

The announcement of the annual People list was greeted this week with all the fanfare and controversy and debate that the Pulitzers can bring. As the Twitter peanut gallery was quick to point out, "She's as old as Wilfred Brimley was the day Cocoon came out." The Daily Beast, applying the full weight of scientific rigor to the selection process, lamented that "Now the 'beauty' criteria is more about cultural cachet than aesthetic beauty" and declared, "Giving the prize to Sandra Bullock this year is equally strategic. For all the readers who will marvel at how good she looks at 50, there are just as many who will say she’s over-the-hill." And the Washington Post similarly observed that Bullock is now "well into territory where many an actress begins a slow — not necessarily voluntary– fade-away, and the roles being offered are for sexless, cranky old-lady types or sexless mother figures…. Bullock being named shines some attention on the dearth of quality roles for real, adult women over the age of 40."

Of course People Friggin' Magazine's lists of beautiful, desirable people are calculated to make a certain kind of statement other than "We'd hit that." Laverne Cox — stunning Laverne Cox — is also on that list of beautiful people, and that's a commentary on her beauty as well as her influence as a transgender female. This year's list, as in years past, represents a range of ages and races, and a newsstand sales-friendly array of women who are having a moment, like Taraji P. Henson and Meghan Trainor.

But the politics of calling the WORLD'S OLDEST FEMALE "beautiful" are particularly inescapable. If you reach back into the People archives, you will find that Harrison Ford, Richard Gere and Nick Nolte were all rather uncontroversially named People's "Sexiest Man" in their 50s. Sean Connery earned the title at 59. Yet for a woman in her 50s to be deemed beautiful still has to come with a whole raft of quantifications — it's really not just about conventional beauty; it's that she's so nice and accessible and still gosh darn able to find work. People's cover calls her "Real, radiant Sandra Bullock" and quotes her saying, "What's beautiful is the honor of being Louis' mother." Just in case you thought she could just be gorgeous.

But the timing of the People announcement could not possibly be any more hilariously apt. Just earlier this week, "Inside Amy Schumer" offered a devastating, much shared sketch in which Schumer stumbles upon Tina Fey, Patricia Arquette and Julia Louis-Dreyfus gathered in a meadow to celebrate the "Veep" star's "last f___able day." The entire bit is brilliant, with the celebrated, award-winning actresses holding forth on Hollywood's insane double standards and fear of older women. "Believe me," Louis-Dreyfus gamely observes, "no one was more surprised than me that they let me stay f___able throughout my 40s, and the fact that it continued into my 50s. I thought that Us Weekly had made some kind of clerical error." And when Schumer asks them when that day arrives for men, her elders just laugh and explain, "Men don't get that day."

The idea that a woman does not sail off over the falls once she reaches the vast, decades-long period known as "over 40" is still quite a novelty in many circles. But things are changing. Last year, at age 53, Louis-Dreyfus appeared nude — and totally amazing looking — on the cover of Rolling Stone magazine. This year's Oscar-winning actresses were the lovely yet authentic looking Ms. Arquette and Julianne Moore. Last year's Emmy winners? The well above drinking age Louis-Dreyfus, Julianna Margulies and Jessica Lange. And the thing is, these victories are not just about being recognized as still somehow miraculously bangable, or even merely beautiful. It's about being visible. You hit a certain, mysterious point and, as the Schumer bit asserts, you're suddenly Mrs. Claus. Your menopausal status is considered a legitimate subject for public discussion regarding your qualifications to run a country. And maybe it seems like a big deal that at the ripe age of 50 a beautiful woman could be seen as beautiful, but for plenty of women on the dark side of 40 beyond, it's just an achievement in this culture to still be seen at all.