"You're hella gay, I'm hella str8": The best "promposal" ever points to a brighter future

"Guess who got asked to prom!" 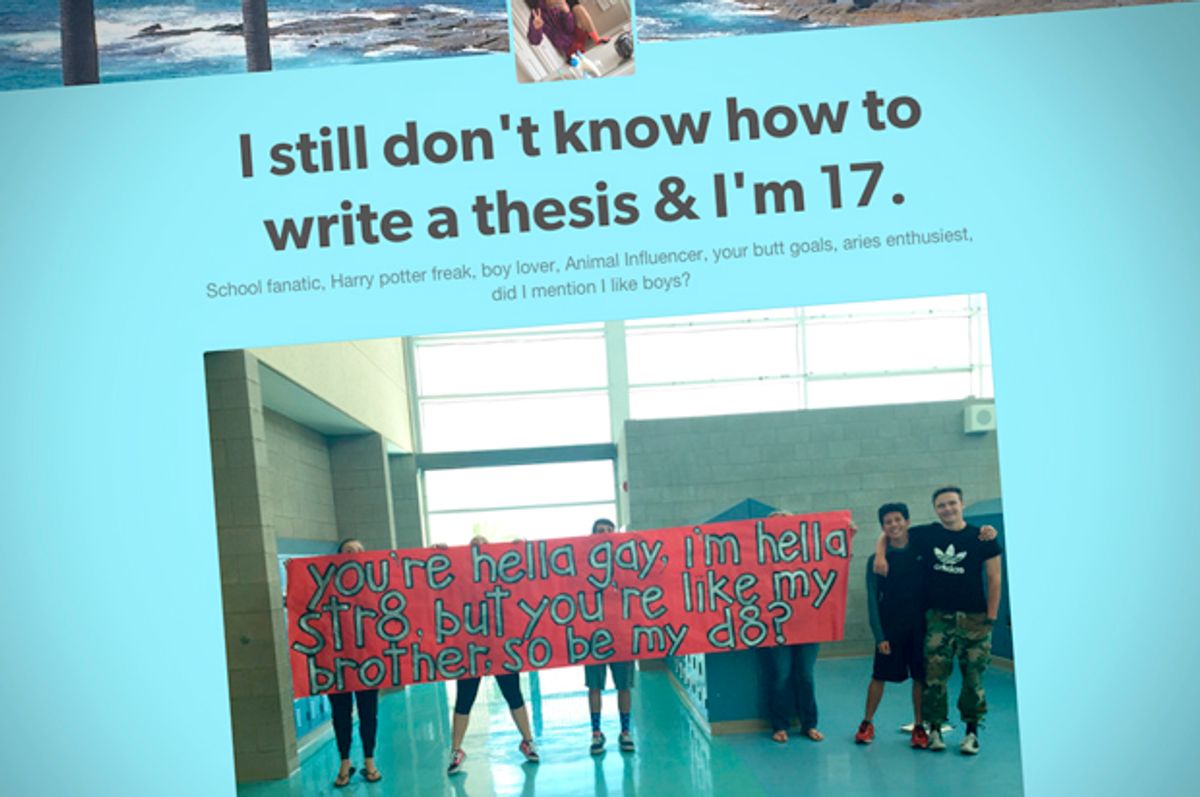 We needed you guys so much this week, Anthony Martinez and Jacob Lescenski. May you both have the prom night of your dreams.

It's certainly been a bleak few days for news about high schoolers. Earlier this week, a second teenage girl pleaded guilty for her participation in a 2013 Florida gang rape of a girl who was "beaten, dragged, kicked" and had her sexual assault recorded. And in Pennsylvania, a group of McGuffey High School gained national attention when they reportedly composed a "lynch list" as part of their self-proclaimed "Anti-Gay Day" — one day after the school's observance of the anti LGBT bullying National Day of Silence.

But elsewhere earlier in the week, Martinez, who is gay, had been lamenting on Twitter, "I DONT WANT TO DATE YOU I JUST WANT A GUY AS A DATE TO PROM. I ALWAYS HELP WITH DANCES ITD BE NICE TO GET ASKED TO ONE." And then he posted an update. It was a photo from a classic style promposal — a big sign held up by four friends, with a bold invitation. And the message read: "You're hella gay, I'm hella str8, but you're like my brother, so be my d8?" It was from his buddy Lescenski, who also had been dateless. In the photo, the two young men are standing next to the sign, smiling with their arms around each other. It's the best. On his Tumblr, Martinez elaborated, sharing a photo of the hugging moment he accepted Lescenski's offer, and saying, "Guess who got asked to prom! BY A STRAIGHT GUY (Army pants). he’s my best friend, and a real man given the fact he has the guts to fulfill my gay student council dream of always helping out planning dances, and never getting asked. I couldn’t ask for a better person in my life. Thank you Jacob can’t wait for May 2nd!"

Unsurprisingly, the story has been blowing up ever since — even Ellen called it  the "cutest thing I've seen all day." Speaking to CNN, Lescenski admitted he'd been nervous about asking his friend but "If it made Anthony happy, and fulfilled his dream of going to prom with a guy, and had a date to prom myself, nothing else mattered." On Thursday, Martinez tweeted, "My favorite part is when straight guys comment saying 'good job.' @JacobLescenskii just made a huge impact everywhere."

There's no question that the two young men, together, have made a big impact — or that the need for these kinds of simple gestures of friendship and acceptance are sorely needed. Unfortunately, we still have adults who don't understand the problems that LGBT youth face all across the country, like the California nuns who walked out on Marin Catholic High School's Day of Silence last week. We have kids who say they're physically unsafe in their schools because of their sexual orientation. That's all real. But there's something else real too, something that as the mother of a teenager I've been privileged to witness again and again. It's this: there are a lot of great straight boys out there, and we don't always hear about them. Boys who are not homophobic dudebros, who believe in equality and respect their female friends and hang out with their gay buddies like it's not a big deal. Boys who were raised right and know how to conduct themselves, as Martinez says, like real men.

It's an exceptional act for a straight kid to openly reach across the orientation line and ask a gay pal to prom, and these two friends deserve all the warmth and support currently radiating in their direction. But I hope their story is also an indication that there are so many other good kids, gay and straight, out there who have each other's backs. They don't necessarily make headlines. But they're the ones who are going to be standing side by side at each other's weddings and serving as godparents to each other's kids. Not in separate circles but together. As friends and allies. Welcome to the future, everybody. It looks like this.