Learning to speak the language of cats: How they're actually telling humans what to do 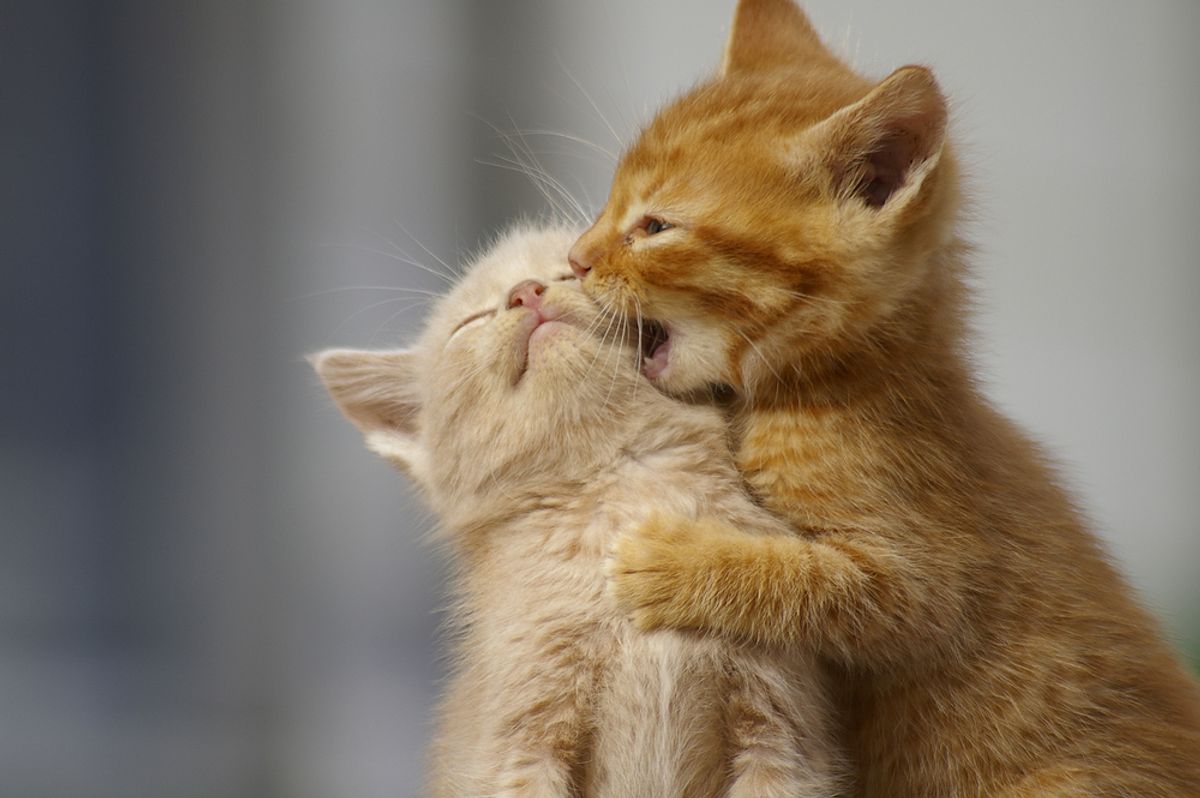 Some time ago, I delivered a cat into this world and now I am raising him because he is my son and I am his mother. (That's the truth -- please don't dispute my personal history in the comments.) The one thing is, my cat never learned to speak English. That's not a problem for me because, as I said, I am his mother and I understand all his thoughts instinctively, but it has meant that he's been unable to apply for the best preschools and hasn't made very many friends outside the family.

So, when I heard that Dr. Gary Weitzman, president and CEO of the San Diego Humane Society and SPCA, had co-written a book called "How to Speak Cat," I jumped at the opportunity to interview him (not for me, because I speak cat, but for the public).

Please read our interview below and learn how to speak cat so you can properly greet my son and give him a birthday card that he will actually understand for once.

First of all, I love cats — and dogs. I wrote the book “How to Speak Dog,” about three years ago with National Geographic, and obviously I’d have been in huge trouble with all my cat friends — both human and feline — if we didn’t follow it up with “How to Speak Cat.” So it was obligatory, but also a real joy to be able to put this out. I'll tell you: Anybody that ever in the world gets asked to write a book with National Geographic, do it, because they're absolutely fantastic at getting you through it. It's a no-brainer; say yes!

What was your writing process like? Did you have to do any research?

I should make it very clear: I have a co writer, Aline Alexander Newman. I don't even know how many books she's written with National Geographic, and she's just an absolutely fantastic researcher, so what I didn't know from 25 years of working with animals, Aline would be able to find out. It was just really astonishingly wonderful to work with her. We spent an awful lot of time on the phone and on email — I'm in California and she's in upstate New York and we've actually never met in person. It was a great partnership and she's just an astonishingly talented woman.

I read that cats make 16 different meows. How do they use them? What do they mean?

That's a fun question. The 16 is a hypothesis, I want to point that out right away; I don't know that they've been quantified specifically or verified scientifically. The point of it is, there are probably one to two dozen different vocalizations per cat that we would classify as "meow." However, you couldn't get a Webster's dictionary or a Fodor's translation cat-to-English or English-to-cat and define those meows, because they're individual for every single cat. One thing we point out in the book is that no two cats make the same noises, and that's why every meow is specific and consistent for that cat with a person. That's the other fun thing: Cats only vocalize to people. You have cats, right?

You know what they're asking you for because they've trained you, and that's the beautiful part. The difference between cats and dogs is that we can train both species but, for the most part, we train dogs to respond to what we want them to do. Cats, on the other hand, actually train us to respond to what they want us to do. It's really kind of cool! Anyway, to get to the bottom of your question: No. You can't translate a particular meow as being universal for all cats, but every cat will make up to two dozen meow vocalizations that mean specific and consistent things — the favorite, of course, being the 4:30 a.m. "gimme breakfast." We challenge people in the book to record their cats. You will actually be amazed by how consistent it is — "feed me breakfast" is different from "play with me" or "I want to go out."

I feel like my cat and I speak the same language... I work from home so I spend a lot of time with him.

I love that! I don't bring cats, but I bring my dogs to work with me every day and I'll tell you, there's nothing better.

Here's my crazy-person question: Sometimes we meow back and forth with our cat and it feels like a real dialogue. Is that stupid? What's going on?

It's really just a bonding experience. Do our cats know exactly what we mean with those noises? Yeah, actually, I think they do. I don't think it's an exercise in futility whatsoever because we do it because we're in a good mood or we're about to do something we do routinely with them in some kind of a positive interaction. I think they know what it is, absolutely. It's amazing; they know what we want before we even articulate it, and dogs do too. Dogs and cats can read a mood before we even open our mouths, so making any of those noises of endearment, they know what that's about. Now, are you asking, say, "do you want chicken or tuna?" when you make a chirping noise at your cat? Well, now you're getting a little specific and I don't know that I'm willing to say yes to that, but the general context, yeah, absolutely. Animals are always contextual.

If cats only speak to humans with meows, how do they communicate with each other?

They generally don't. Adult cats obviously hiss and make warning noises, and kittens will do the whole spectrum of noises with each other — chirping, meowing, purring, all of that — but adult cats don't. When cats communicate with each other, it's through body language or it is those vocal warning noises, which nobody misinterprets. That goes to the whole question of, are cats social creatures with other cats? And, generally speaking, they're not. That doesn't mean they don't want to be with other cats, but they don't pair up the way that dogs do or they way people or other species do. In animal sheltering, the biggest issue we face is outdoor cats, feral cats. That's where all the kittens come from, that's where we have the biggest challenge right now to save lives. Feral colonies are a really good example: cats are together in a very spread-out colony but they're not proximate, they're not on top of each other. Whereas dogs and wolves would be huddled up in a mass together, cats are not like that. They developed a preference to be within an area of each other but not to have that much closeness; therefore there wasn't a big need for vocalization to each other. That's why, when they become adults, they don't really do that anymore — but they do with us, which I think is one of the most charming, wonderful things cats do. That proves there's an incredible bond, because they vocalize to humans. Anybody who thinks cats are aloof and don't like us, well, prove it! There's too much evidence out there that they really do a lot of things for us, so it's okay to be a crazy cat person!

That's, like, becoming my Internet brand... I get a lot of hate comments that are like, "This person is clearly a crazy cat lady."

That is so ridiculous. Their loss, then, if they don't get it.

What are some other ways cats communicate?

We kind of intuitively know all the warning signs with cats: the arched back — I think maybe a 2-year-old might not know, but everyone else does — the drawn-back head, the ears flat back against the head. The ones that are subtle are really the most beautiful ones, like blinking. We wrote about that in the book: the slow eye-blink. I think somebody misquoted me and said it was like a kitty kiss, which, first of all, I never use alliteration, and secondly, I think that's a little much for me. It really does represent affection and acceptance and it's really quite a gorgeous, subtle, physical movement that they do to show they're comfortable with us. I think that's really nice. There's also the whole position of the body. The tail being straight up is kind of a "how-do-you-do," the cat handshake, so to speak. Tail position, ear position, whisker position, pupils — dilated or constricted — those are all very consistent traits in cats.

How can we use the information in the book to more aggressively or proactively bond with our cats?

That's a great question because it has a totally different answer than for speaking dog. For how to speak dog, as much as we are crazy dog people in this country — thankfully, because dogs are really amazing things — people who love dogs don't understand their dogs as well as people who love cats understand their cats. It's really astonishing. For those who are already crazy cat people, the book will verify a lot of things you probably already have been hypothesizing; what we hope it will also do is show you some of the more subtle things that you can actually go and prove to be true with your own cat. Things like the whiskers and the blinking, all of that. Things like don't ever rub a cat on her belly. You know that, but most people don't know that who don't have cats. I think it will verify a lot of things people have wondered about their cats, but there are other things people might not know, like what does a cat do when he rolls over? What does licking mean? A lot of people who do love cats have problems with their cats. As a vet, I would get lots of people bringing their cats in for urinalysis and for physical exams because the cat was not using the litter box correctly, and it's almost always anxiety. Those are the things that can help people who are already in love with cats, but what I really hope is that this book will help people who don't know cats realize that cats are pretty neat creatures who actually do care about us, do want to be with us, and we can have an incredibly wonderful relationship with them — probably as strong as or stronger than with dogs.