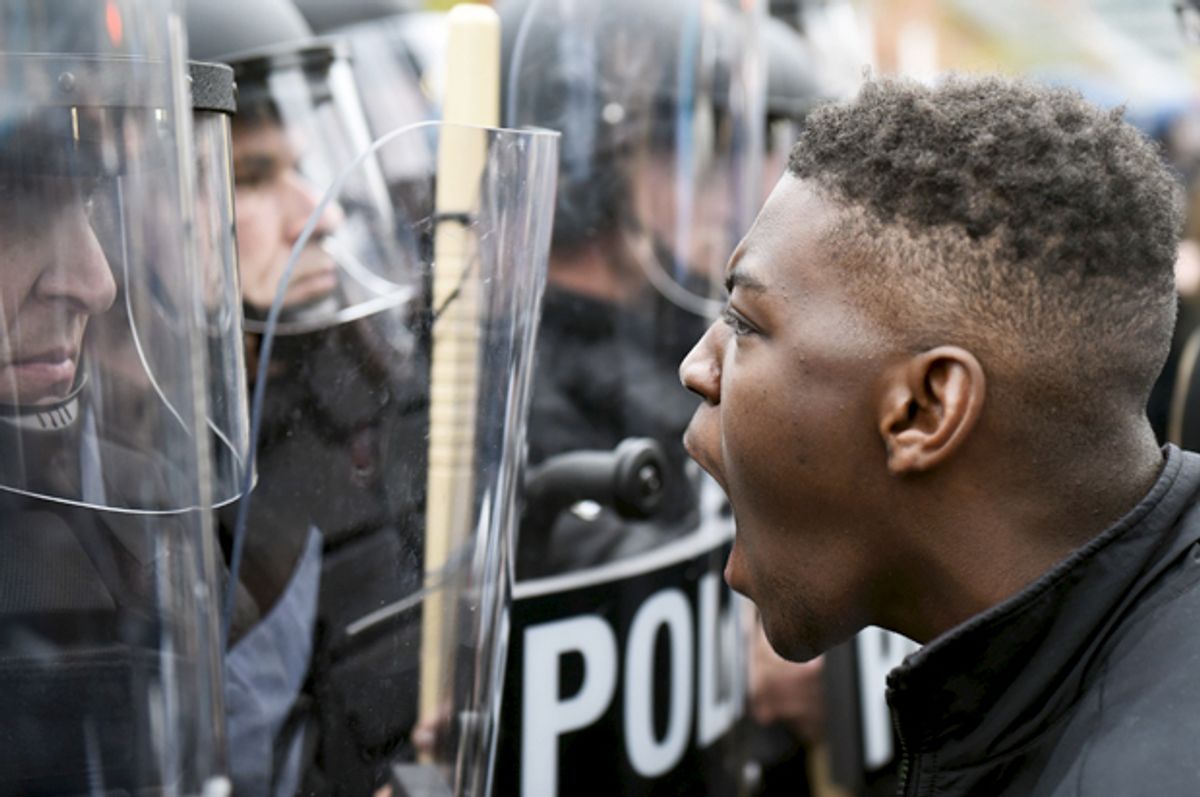 Baltimore has erupted. Its citizens have taken to the streets to rebel against an undue and all-too-common show of excessive force against citizens by the police. Most recently, the Baltimore Police applied such force when arresting 25-year-old Freddie Gray that they severed his spinal cord. Arrested apparently for making eye contact with the police -- essentially for daring to look while Black -- Gray was denied medical care. He ended up in a coma and died seven days after being arrested.

On Monday, despite calls for a peaceful day out of respect for Freddie’s burial, protesters took to the streets, smashing stores, burning buildings, and taking property from a mall, a CVS, and a check casher. These acts of justifiable rage and rebellion whipped the media and government officials into a frenzy, calling for the “thugs” and “criminals” of Baltimore to be arrested and locked up. A procession of respectable-sounding Black folks got on television, the Rev. Jamal Harrison Bryant the most visible among them, calling for peace and an end to the violence.

I watched on the news as people smashed the windows of the check casher. And I couldn’t muster even the faintest anger or outrage toward them. The presence of these check-cashing businesses is one of the key physical features of Black and poor neighborhoods that you rarely see in affluent neighborhoods -- places where poor people, in the absence of bank accounts, are forced to pay exorbitant fees just to access the money they have fairly earned. These kinds of businesses prey on our most vulnerable citizens, and do so under the guise of offering a needed service. That the residents chose that business to smash suggests that at least some of them recognize the ways in which such companies extract the meager resources of local residents. Others may simply have thought there was money on the premises.

But the idea that all citizens who rebel against an unjust system must have righteous intentions in order for their actions to be worthy of respect is simply ludicrous. The oppressed are not a monolith.  They don’t move or think with one mind. They don’t all react to injustice in the same way. Nor should they.

The right of the people to revolt in response to unjust conditions is a founding principle of this Republic. But another founding principle of this republic is that Black people are not fully human. Therefore they are not legitimately "the people," not a part of the "demos" in democracy. Thus revolution and rebellion remain the province and property of America's white citizens. All other comers are illegitimate.

The Baltimore rebellion arises at a singular moment in history, as three Black women have been tasked with restoring law and order: The first is Mayor Stephanie Rawlings-Blake, who gave a statement on Monday condemning the “thugs” doing violence in the city. The second is Gen. Linda Singh, an officer with the Maryland National Guard, who appeared in military fatigues, in a show of state force and authority. And finally, there is Attorney General Loretta Lynch, who was being sworn in at the exact same moment that the protests erupted in Baltimore.

What does it mean that three Black women have an unprecedented amount of municipal, national and military power to put down a rebellion? I must admit I am conflicted. When you grow up as a Black girl overachiever in this country, you are taught that the levels of power and prestige that these three women have are the very kinds of power and access that our ancestors fought and died for us to even have the possibility of experiencing. Simply on the basis of Black exceptionalism, I am supposed to be magnificently proud of these three women – of the kind of possibility they represent.

Not one of these women stands in the place of power she stands in without having battled for it: Take, for example, the GOP’s now-legendary obstruction of Lynch’s nomination. In a similar vein, climbing through the military ranks and landing a position of substantial authority, as Singh has done, is notoriously difficult for any woman. Just look to the sexist comments Rawlings-Blake has faced on social media in recent days for a sign of what a woman in authority faces on a regular basis.

But our ancestors did not fight for us to get access to these spaces just so that we could act like white supremacists in Blackface. They wanted us there so we could do the work of justice. So while my Black feminist, Black woman, Black girl overachiever self wants to stand and champion these women and their presences as a triumph of American democracy, I cannot.

Their presence proves that American empire, in its most democratic iteration, is no respecter of persons. Any person willing to do the state’s bidding can have a role to play. Lynch’s first statement as attorney general begins: “I condemn the senseless acts of violence by some individuals in Baltimore that have resulted in harm to law enforcement officers, destruction of property and a shattering of the peace in the city of Baltimore.”

I recognize that this is the kind of thing those appointed to enforce law and order must say. But it is rooted in a fundamental kind of dishonesty. For respectable citizens, a shattering of the peace sounds like broken windows and burning businesses. But I would submit that the shattering of the peace for Baltimore’s poor and disenfranchised residents sounds much quieter -- it sounds like the snapping of Freddie Gray’s neck, and the crushing of his voice box so no one could hear his screams, in the back of a van driven by those sworn to protect him.

To narrate the story in any other way is to propagate a pathological level of deception about who the real criminals and the real victims are. To continue to condemn as senseless acts of violence things that actually make perfect damn sense is only to further this pathology. If the police are the criminals then what sense does it make to tell ordinary citizens to sit at home, quietly observing law-and-order? What sense does it make to ask those citizens to keep faith with a system that would sooner snap their necks for committing virtually no crime rather than give them due process? And for an attorney general who has watched lawmakers skirt right up to the edge of the law in order to prevent her from obtaining her position, what sense does it make to be a law-enforcement sympathizer?

What sense does any of it make?

For any person who has ever been angry enough to throw a glass against a wall, or destroy one’s personal property out of sheer frustration and injustice, the anger of citizens who are daily subjected to indignities, violations of personal space, and limited opportunity makes perfect sense.

Baltimore is a city with a Black mayor and a large Black middle class. These folks have worked hard and been rewarded well by the system. In this moment, class schisms among Black people become apparent, as respectable middle-class Black citizens plead for an end to violence, and hope against hope that they won’t be mistaken for their lower-class brethren. Baltimore teaches us that Black bodies can propagate anti-black state violence.

It’s the very kind of internecine struggle that won’t help any of us get free. I am a middle-class Black person, but I have seen cops harass my family members. I have seen predatory lending practices devastate those I love. I see multigenerational poverty nipping at the heels of relatives who have not been as fortunate on the path as me. And I am angry about it. Believing in the myth of my own exceptionalism helped me to make a way out of a working-class existence. But it didn’t help anybody else. Because exceptionalism by its very nature is not meant to have mass impact.

As we watch Baltimore burn, Black folks will have to do some serious soul-searching about where our solidarities will lie. Are they going to lie in our allegiance to our comfortable middle-class existences and deep desires for success in a fundamentally effed-up system, or are they going to reside with those still struggling to make it?

If we are going to push America to stop sanctioning the killings of our people, then we will have to decide to throw our lot in with the people, to recognize that no matter how fancy we look on the outside, in the right circumstance, all of us are just one police encounter away from the grave.

Freddie Gray’s death, though tragic, is instructive. If you want to kill a thing, snap its neck. It might take us a while to snap the back of white supremacy, but it is past time for us to handcuff it, put it in a van without a seatbelt and take it for a “rough ride.” When we all emerge, hopefully, at the very least, white supremacy will be on life support.