As a lottery winner turned narcissistic talk-show host, Wiig is the tragicomic heroine of a brilliant media satire 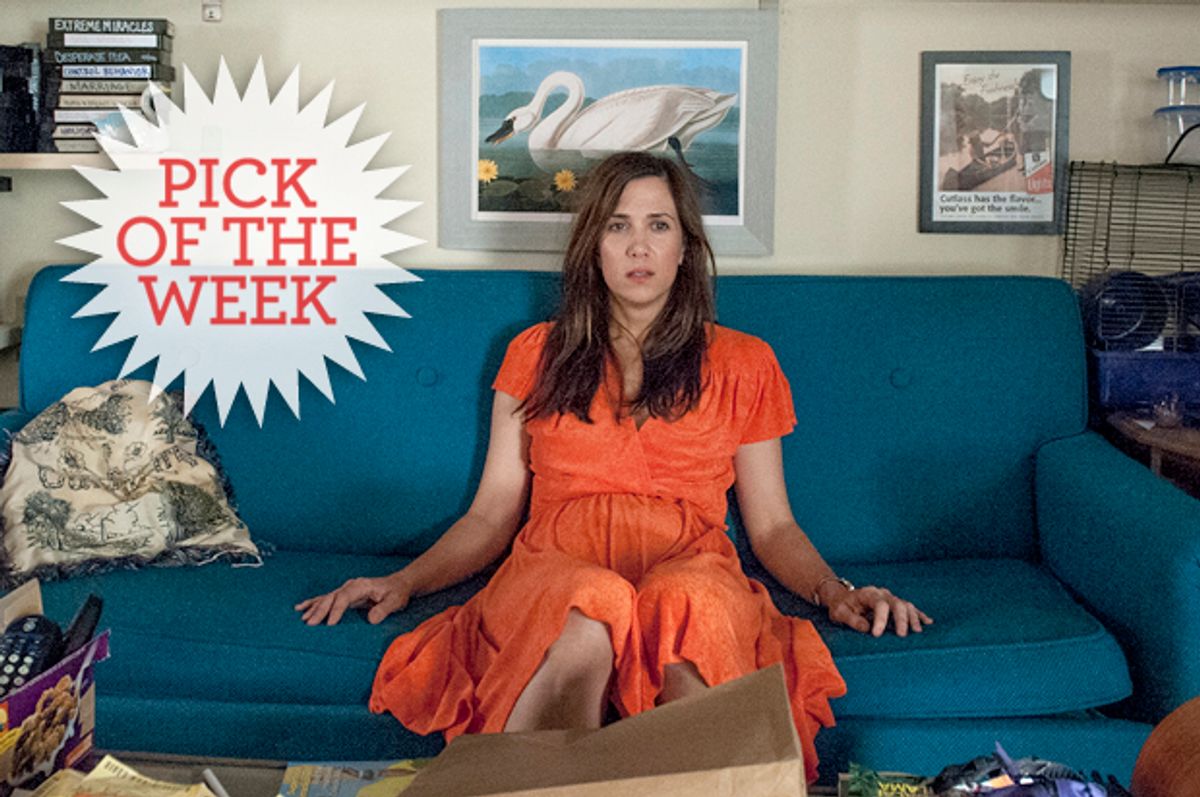 Kristen Wiig in "Welcome to Me" (Bron Studios)
--

Someone I know who worked on a movie with Kristen Wiig recently described her to me as a “sick actress,” which I understood to be terms of fulsome praise. I’ve certainly seen flashes of that in Wiig’s up-and-down movie career, but like a lot of people seeking to graduate from TV comedy, and perhaps especially from “Saturday Night Live,” she’s had trouble finding the right vehicle. She was terrific opposite Bill Hader as a depresso sibling pair in “The Skeleton Twins,” and in fact the two of them were much better than the formulaic indie weeper around them. She was irresistible opposite Ben Stiller in “The Secret Life of Walter Mitty,” a movie so ground down into meaninglessness by the Hollywood machine that it never actually happened and we have all forgotten it.

But I am here to tell you that the true sickness of Kristen Wiig, in whatever sense of that word you like, is on magnificent display in the malicious, hilarious and heartbreaking “Welcome to Me,” one of the biggest movie surprises of 2015 so far. It sounds like an overworked concept that is both somewhat dated and drawn from too many past examples: A lonely and unbalanced woman who watches way too much TV hits the lottery jackpot, and decides to reinvent herself as a talk-show host whose only subject will be, well, herself. Or as Wiig’s character, Alice Krieg, puts it, the key topics she longs to explore before a studio audience (after entering in a swan boat, of course) are “what I like to eat, my relationships with animals and who I think is a c—t.”

Although it clearly bears some genetic relationship to previous media satires, stretching back all the way to “Network” and “A Face in the Crowd” – and most assuredly including “Being There” and “The King of Comedy” – “Welcome to Me” has an acrid and delicious flavor that is highly contemporary and entirely its own. None of those earlier portrayals of media inanity and self-absorption, so far as I know, featured a running segment called “Someone Has Been Tampering With My Makeup Bag,” which involve dramatic re-creations of such episodes from Alice’s life, such as the infamous eyeliner incident at Big Bear in 1991. (Another segment on Alice’s show is called “Smelling Things Before They Happen.”) I may be on thin ice here, gender politics wise, so let me suggest as a hypothesis rather than a scientific certainty that this movie captures a specific variety of American (or at least Western) female-coded insanity in a way rarely or never seen on screen.

On several occasions, Wiig’s uncannily precise portrayal of Alice’s bottomless narcissism made me laugh until I cried. This is a woman who employs the phrase “I would like to read from a prepared statement” at every opportunity, including family dinners. She reads from a prepared statement at the news conference announcing her huge lottery win, which is appropriate enough, but gets cut off when she tries to explain that she has been using masturbation as a sedative for more than 20 years. But the crying was real too, and the barely contained anguish beneath Alice’s veneer of semi-functionality and self-appointed sexiness is ultimately not funny. This is a performance of immense naturalness and depth, one that never allows us to forget our essential kinship with Alice – and it’s much funnier for that essential truth.

While I can’t imagine the movie working one-tenth as well without Wiig, who commands every scene with the disordered but magnetic force of Alice’s damaged personality, she is not the only ingredient in its success. This is the first produced script for writer Eliot Laurence and only the second feature film for longtime theater director Shira Piven, but their work is sharply focused and economical. “Welcome to Me” captures the brain-fried, second-rate, exurban atmosphere of Alice’s environment – Palm Desert, California, the less affluent town next to Palm Springs – with satirical but not quite stereotypical perfection. Its marvelous supporting cast includes Tim Robbins, very quiet and calm as Alice’s increasingly concerned therapist, Wes Bentley as a thrice-divorced infomercial host who peddles dietary concoctions while wearing a pith helmet, and Joan Cusack, Jennifer Jason Leigh and James Marsden as the staff of a low-rent production studio who are alternately dazzled and horrified by Alice’s oversize dreams and overstuffed bank account.

From Alice’s first disastrous episode of “Welcome to Me, With Alice Krieg,” in which she makes a meatloaf cake with sweet potato icing, and then sits down and eats it, the movie walks an exceptionally fine line. Is Alice a gullible idiot or a holy fool, an object of scorn or of pity? It’s Wiig who walks ahead of us on that line and holds our hands, showing us how Alice grows in confidence even as she descends deeper into delusion and madness, and how closely those things are related. When her show attracts some fringe notoriety and a grad-student type (Thomas Mann) shows up to interview her – “I love the way you play with gender and race and time and perception in your work” – Alice blurts out the first thing that enters her mind: “I love you.”

“Welcome to Me” might have louder buzz and better reviews, and might not be opening directly opposite the biggest Hollywood release of the year, if it were more farcical and more outrageous – if it framed Alice as a feminist cultural revolutionary who overthrows the patriarchy, or depicted her sweeping to the top of the ratings and deposing Oprah and Ellen. “Welcome to Me” is an entirely different kind of story – arguably darker, yes, but also more honest and more delicate. It’s almost wrong to call this movie satire: Once we accept the improbable premise that Alice is suddenly filthy rich, everything she does, and every aspect in Wiig’s portrayal of her personality disorder, is entirely plausible. This is a tragicomic fable about an all-too-real social predicament rather a wish-fulfillment fantasy, and the tragic result may be that hardly anyone notices how good it is, or the sickest, weirdest, most triumphant performance of Wiig’s career.