"I condemn the riots in the same breath that I condemn the police brutality, the systemic racism, the disenfranchisement of black America" 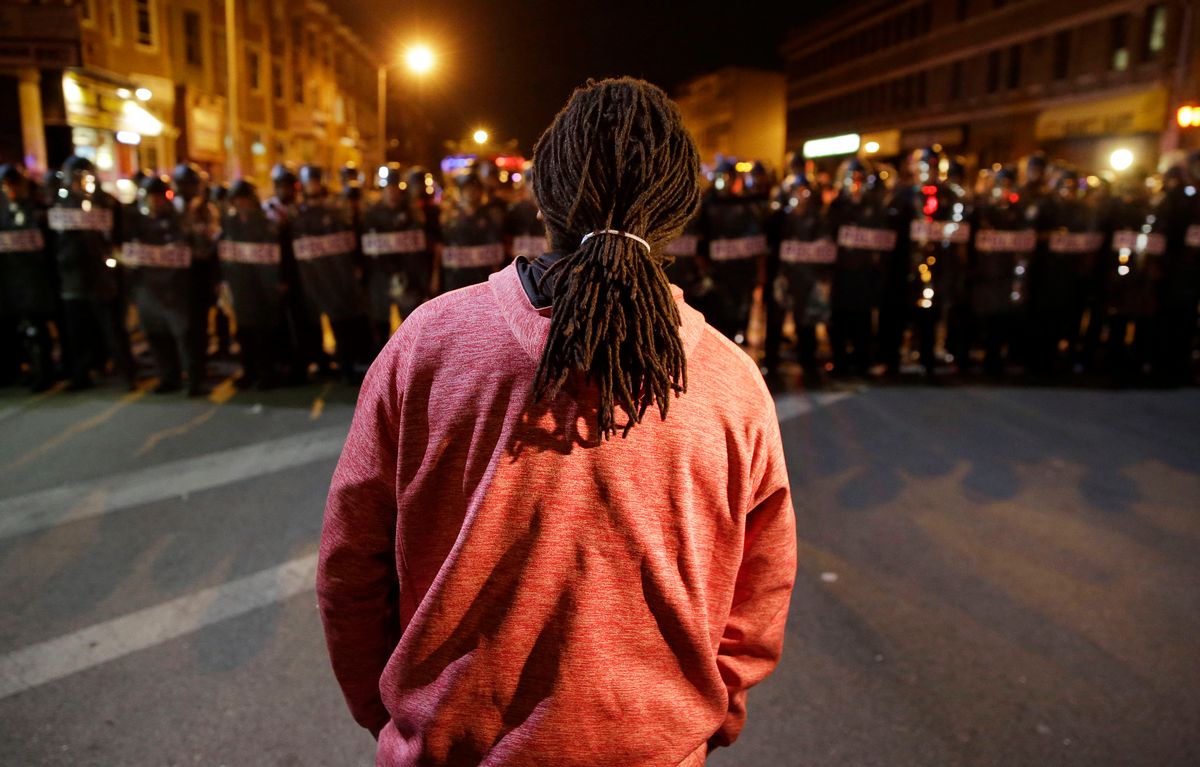 So let’s get this out of the way: I don’t like riots.

Nobody likes riots. Money is lost. Property is destroyed. People get hurt and killed. Riots become a reason to institute martial law and brutalize citizens, generally with little regard for what those citizens did in the riot.

People who participate in riots don’t tend to be happy at the time or look back fondly on their memories of them afterward. People who get disingenuously accused of “liking” riots hardly ever express anything close to an actual “pro-riot” sentiment.

Let's get something else clear right away -- the term "riot" isn't all that useful. It describes any disorganized outbreak of violence, but people running out and breaking things for the fun of it is not the same as violence in response to ongoing injustice.

And the outbreak of violence by the oppressed is not at all equivalent to the outbreak of violence by the oppressors; a “race riot” is a term for two very different phenomena. The destruction wrought by minorities who are “punching up” is partial and temporary; meanwhile when an oppressive majority decides to punch down, the destruction tends to be total and permanent.

That asymmetry is the fundamental problem with violence as a tool of revolution. Of all the ways to try to strike back against oppression, violent insurrection is one of the costliest, most painful ones for the people doing it--the brunt of the economic and personal damage ends up borne by the oppressed, not their oppressors. Violent resistance is a dangerous gamble that the attention drawn to the cause will outweigh the bloodshed likely to follow in the name of “law and order”--and it was this tactical consideration, as much as spiritual considerations, that made Martin Luther King Jr. preach pacifism.

If you want a hot take from someone on why rioting isn’t a good thing but also isn’t some terrifying harbinger of total anarchy, Dr. King already gave the definitive one 48 years ago. Yes, he famously and forcefully condemned the “Long Hot Summer” race riots of 1967 in his “Where Do We Go From Here” speech, but went on the following month to challenge the nation’s social scientists to get past facile, simplistic “Riots are barbaric and bad” rhetoric. His diagnosis was that riots are a painful symptom of oppression--and, like most painful symptoms, useful as a warning but dangerous as a distraction.

The real danger? That the complacent middle-class TV news-watcher’s emotional reaction to broken windows and burning buildings drown out any possible understanding of the long ongoing history for which riots merely serve as colorful punctuation.

That’s the worst result that can come of violent unrest--all the times it has, as Dr. King lamented, failed to change anything and indeed provided ammunition for the opponents of change. In 1992 an act of police brutality went viral and the city of Los Angeles burned; afterward, the LAPD not only failed to reform but spent the next five years getting worse, with the riots themselves serving as handy justification for police brutality. It’s this knowledge that can make a man like David Simon utter chilling words of empathy for an angry young man with a brick in his hand while nonetheless pleading for that young man to stay home.

But Dr. King didn’t spend that much time condemning riots--he spent far more of his time condemning people who spent all of their time condemning riots. Hence the 1968 quote spreading through Twitter like wildfire, that “a riot is the language of the unheard.” King understood that trying to solve the problem of “riots” instead of trying to solve the problem of oppression is like feeding painkillers to a patient with a gushing open wound. That broken windows matter less than broken spines--and as long as spines are being broken, no condemnation from you or me or Dr. King himself will stop windows from being broken in response.

King’s charisma and rhetoric did not, as some mythologists like to pretend, quell all violence during the civil rights era. The civil rights movement was never, at any point, a monolithic chorus of peace and love; King constantly struggled to maintain his ideals of nonviolence against the backdrop of the Harlem Riot, the Watts Riots, the Long Hot Summer. When King paid the ultimate price for his ideals and was assassinated in 1968, President Johnson’s response to the ensuing violence was a weary “What did you expect?”

When your sons and daughters are shot dead in the street and the state refuses to so much as apologize, someone, somewhere is going to pick up a brick. When a people go unheard for generations, someone is going to scream. When you take your foot off a man’s neck, he’s going to knock your block off. To expect otherwise is to expect oppressed people to be inhuman.

To draw a false equivalence and claim that rioting and violence taint a cause, make the oppressed just as bad as the oppressors--by that standard nothing Martin Luther King accomplished is untainted, with violence breaking out among his followers despite his best efforts throughout his life and following his death.

But let’s not stop there. If the taint of violence delegitimizes any cause it touches then there’s plenty of condemnation to go around. No white LGBT American who attends pride parades that celebrate Stonewall ought to condemn “rioting” with a straight face. Nor any white woman who enjoys the right to vote. Or anyone, regardless of race, who enjoys the benefits of a 40-hour work week.

Indeed, if we insist on derailing any discussion of any social cause with condemnation of the violence that breaks out along the way, we ought to set aside a scolding session for the Fourth of July.

Leaving aside the irony that the entire Revolutionary War was an armed insurrection, that we have hardcore patriotic conservatives naming themselves after an act of property destruction, here’s the dirty little secret about the entire American Revolution:

Back in 1770 a black man who’d had enough of being pushed around joined an angry mob of citizens throwing rocks and shouting insults at officers of the law. The cops killed him and four other men, and the cops were either acquitted or given slaps on the wrist (literally, a brand on the thumb) because it was decided armed officers of the law have the right to kill civilians in “self-defense.”

People were told to quietly accept that justice had been done. They didn’t. The “outrage bloggers”--back then blogs were printed on dead trees and called “pamphlets,” but the concept was the same--went to town. The lethal bullets used to silence Attucks’ rocks and fists only stoked the resentment against a corrupt state that had caused Attucks to pick up a rock in the first place.

American patriots, our country began with a race riot--a violent uprising of “negroes,” “mulattoes” and “Irish teagues” who were tired of being unheard. No one who sings “God Bless America” and venerates the Founding Fathers has standing to self-righteously huff that today’s activists must utterly disassociate themselves from all “riots” before stating their demands.

But we don’t live in the ideal world where oppressors quietly, calmly agree to hear out the people they oppress before the shit hits the fan. We can simultaneously condemn violence and yet celebrate gay rights, women’s suffrage, the 40-hour work week, and the United States of America--because we recognize that in the highly imperfect world we live in, no important change ever happens without violence to punctuate it.

It’s not the contradiction that some members of the chattering classes repeatedly, obnoxiously try to claim it is every time this happens. The violence that “taints” a message isn’t an expression of the message itself--it is a symptom, an inevitable symptom, of authority’s refusal to hear it.

I don’t like the images I see in Baltimore right now of broken windows and burning buildings. I don’t like them because they are nothing but a visible symptom of something I really don’t like--a vicious system of racism where black citizens are treated as subhuman and disposable. The momentary violence made visible by the media is only a response to a much longer history of violence--and will be used to justify further violence in turn.

I condemn the riots in the same breath that I condemn the police brutality, the systemic racism, the disenfranchisement of black America. It’s the same thought. It’s all one thing.

We tend to acknowledge that implicitly once we perceive a cultural battle as having been won. Victor Hugo said it--once the cause behind a “riot” is accepted the “riot” becomes just part of the “revolution.” We talk about the American Revolution as one long arc of history and the Boston Massacre as one incident within it, not as some anomalous, shameful event to be called out and denounced.

Someday, if Dr. King’s dream ever comes true, there will be a story of a revolution that was born in his time and that, by the year 2015, was still only reaching its middle. Harlem in 1964, Los Angeles in 1992, Ferguson in 2014, Baltimore in 1968 and in 2015--these will all be bright bloody punctuation marks in the story.