"The south will rise again," apparently on prom night: The giant parenting fail behind this viral flag-waving photo

Who needs a corsage and an awkward pose in front of a tree when you have a Confederate flag and rifles? 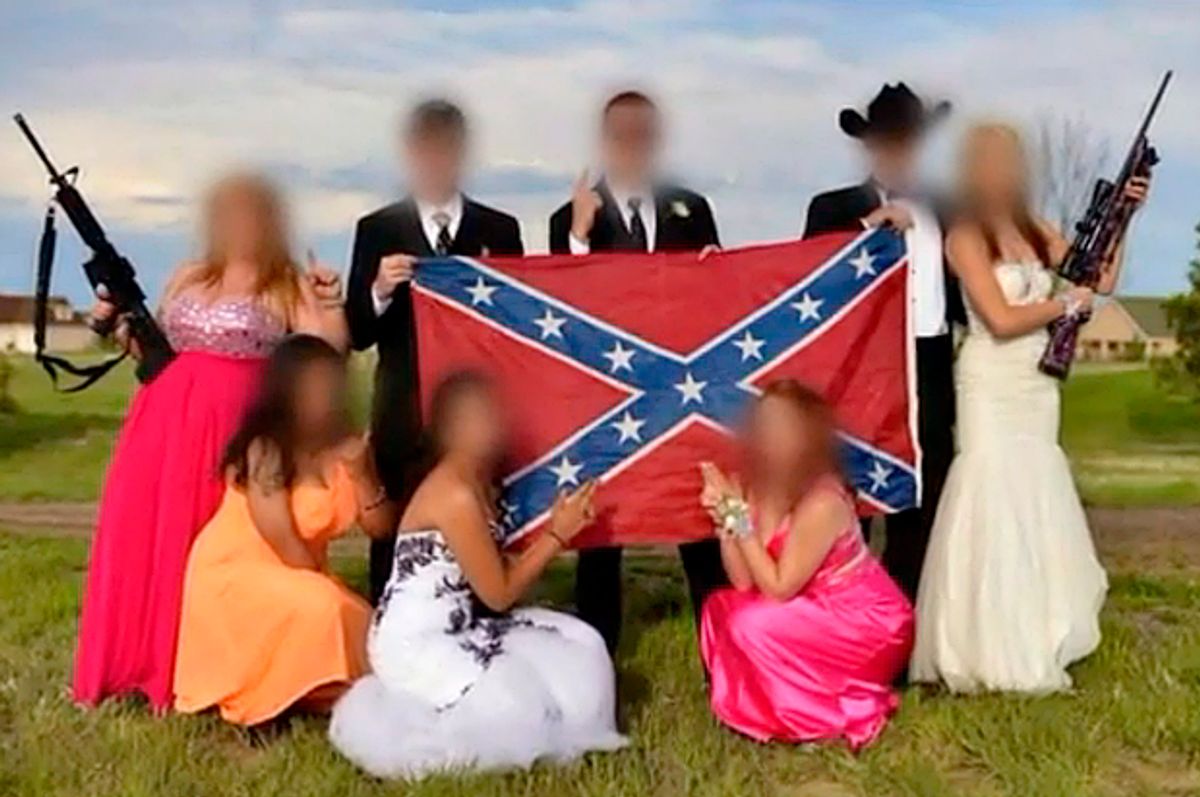 My fellow parents of teenagers: I'd just like to remind you that we are actually old enough to have spent the past two decades on the Internet, and that our kids have grown up online. So you really need to get it through your heads that if you choose to document and share your family's poorly thought-out escapades, it might get around.

We are deep in the throes of prom season, and with it, the annual deluge of viral-ready prom related news stories. There are the sweet ones — like the straight kid who asked his gay best friend to go with him. And there are the "Oh my God I can't believe this is happening in 2015" ones — like the Wisconsin school that wanted prom to be "a night to protect her character," or the plus-sized student who faced suspension for her dress because, she says, the assistant principal told her, "You have more boobs than other girls. The other girls have less to show." And then there's a group of students from Chaparral High School, and their stunningly retro prom picture.

As Fox 31 in Denver first reported, when a photograph of a group of local prom-goers showed up in the Facebook feed of local CU Boulder student Mairenn Digeorge, she was stunned at the image — five teen females and three males posing with rifles and surrounding a large Confederate flag. The caption was, "The south will rise again." While reporter Chris Jose notes that the photo depicted no law-breaking, the wisdom of flaunting a message with such racist and threatening implications, surrounded by guns, is questionable to say the least.

But one of the parents of the kids in the photo was surprised about the picture too. Speaking on condition of anonymity, she said, "When he got out there he was surprised that guns were brought out and the Confederate flag was brought out. There were other parents there fully supporting it and taking pictures." She added, "I think in their immaturity they kind of think it is a cowboy thing, but to have parents feed into it and support it is really upsetting to me." You have to wonder why, then, she didn't speak up at the time and say she'd prefer her son opt out. But the compassionate thing is also to remember that it's hard to be the lone voice in a crowd, when everyone else seems to take something you object to as totally normal.

On Tuesday, one of the girls from the photograph — also on condition of anonymity — echoed that discomfort. She issued an apology, saying, "It's hard to say sorry when that’s the only thing that can come out of my mouth right now. I feel like there should be a better word for it. I was very uncomfortable with this whole situation and didn’t know what to say or what to do. I don’t condone any of the actions that were in the picture and I don’t condone anything that has to do with the flag. I feel everyone struggles with trying to do the right thing at the right time. It was just difficult for me to voice that and stop what was going on."

Lots of people, not just in the south, have strong feelings about the Confederate flag, and believe it symbolizes more than its traditional Civil War usage. Debate over that imagery and meaning persists. The tenacious hold that flag has on certain segments of our country hardwired into our American culture. Just earlier this year in Texas, the state's Supreme Court weighed whether motorists should be allowed to display Confederate flags on their license plates. But while I know I'm just an uppity Yankee, I think it's fair to say that as author James McPherson says, "The Confederate flag is now symbolic of both slavery and white supremacy and of the relationship between the two of them." And what's astonishing and sad about that prom picture isn't just that it's a bunch of gun-toting kids gathered around that symbol, it's the thought that they were ignorant of its meaning. As Mairenn Digeorge told Fox 31, "If you're going to take a picture with a flag, you need to know what it stands for. You need to know people are going to be offended by it."