You can't pin this one on women: Joss Whedon says it's "horses**t" that hectoring feminists chased him off Twitter

Show's over, Twitter — you can return to your regularly-scheduled feminism-bashing now 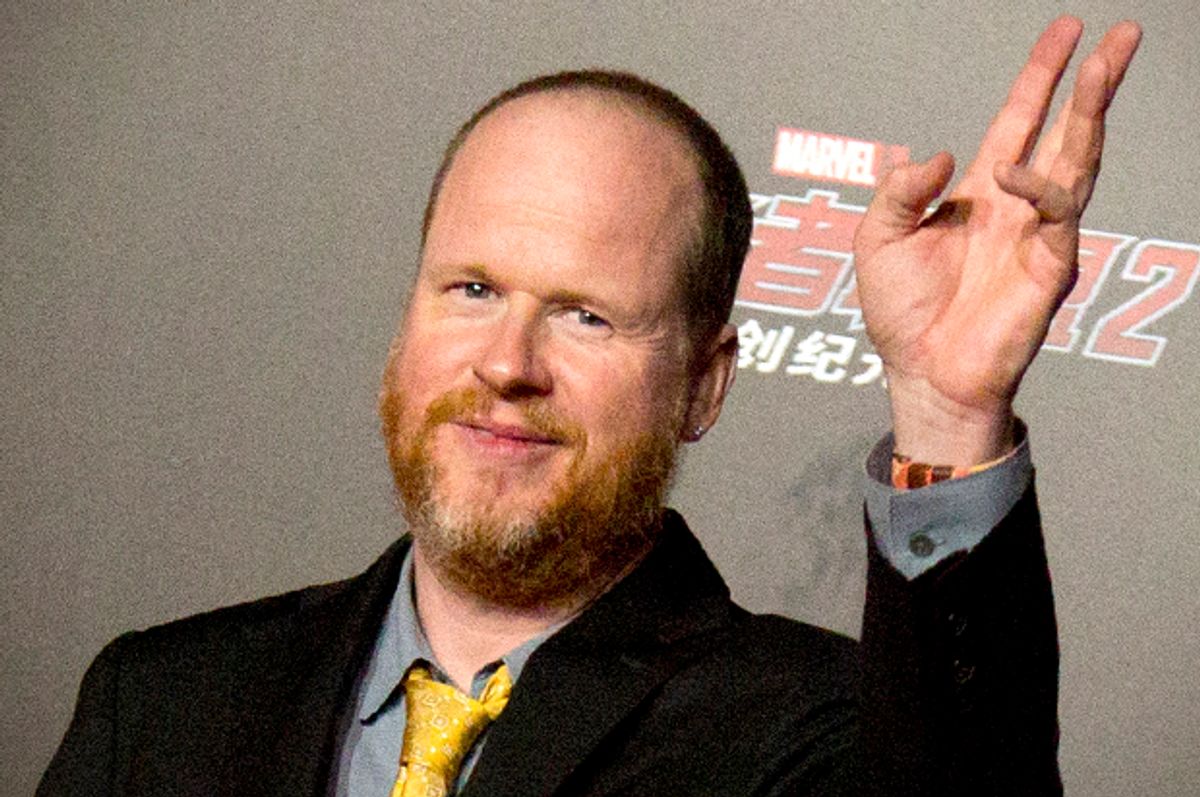 Foiled again, evil feminist cabal. Turns out you did not drive Joss Whedon off Twitter, no doubt sobbing over your vagina-centric cruelty, after all. Try harder, misandry!

When the "Avengers: Age of Ultron" writer-director — and, you know, that guy who created "Buffy the Vampire Slayer" — took a sudden leave of social media earlier this week after his movie's gangbusters opening, many assumed it had something to do with the intense, gross feedback that's such a hallmark of Twitter interaction. Patton Oswalt observed that "Yep. There is a ‘Tea Party’ equivalent of progressivism/liberalism. And they just chased Joss Whedon off Twitter. Good job, guys. Ugh." The Independent pondered that "Many have speculated that he was hectored by feminists," while conservative outlets like Breitbart eagerly reported on Whedon's departure as a response to a "rabid feminist ‘Avengers’ backlash."

Undeniably, Whedon has been on the receiving end of plenty of outrage over the new "Avengers," and in particular, the evolution of Scarlett Johansson's character Black Widow. And in case you don't happen to get a whole lot of "Kill yourself, ugly whore" in your replies, let me report that Twitter isn't always a place for reasoned and subtle cultural dialogue. Along with plenty of support for his work, there has of late been a fair amount of expletive-riddled rage, with disgruntled tweeters calling Whedon a "sexist piece of s__t" and similar.

But in a conversation with Adam B. Vary of Buzzfeed News Tuesday, Whedon affirmed that the haters had nothing to do with his departure. In fact, he said, "That is horses__t." He went on to explain, "Believe me, I have been attacked by militant feminists since I got on Twitter. That’s something I’m used to. Every breed of feminism is attacking every other breed, and every subsection of liberalism is always busy attacking another subsection of liberalism, because god forbid they should all band together and actually fight for the cause. I saw a lot of people say, 'Well, the social justice warriors destroyed one of their own!' It’s like, Nope. That didn’t happen. I saw someone tweet it’s because Feminist Frequency pissed on 'Avengers 2,' which for all I know they may have. But literally the second person to write me to ask if I was OK when I dropped out was [Feminist Frequency founder] Anita [Sarkeesian]." Maybe Sarkeesian knows exactly what it's like to be harassed and threatened and online? Maybe because if there's any group who'd stand in solidarity against the trolls and bullies, it'd be one that knows what they're capable of? And you'd likely be looking at a whole lot of women.

Whedon says that he took off because "I just thought, Wait a minute, if I’m going to start writing again, I have to go to the quiet place. And this is the least quiet place I’ve ever been in my life.… It’s like taking the bar exam at Coachella." But he acknowledges that "When you declare yourself politically, you destroy yourself artistically. Because suddenly that’s the litmus test for everything you do — for example, in my case, feminism. If you don’t live up to the litmus test of feminism in this one instance, then you’re a misogynist. It circles directly back upon you."

We are not all members of neatly defined groups with clearly written manifestos for all to abide by. Nobody gets to be Official Spokesperson for anything. In the best of circumstances, our idealogical differences challenge us to examine our common goals for common good. In the worst of them, we are reminded that self-described members of our own tribe can be as hateful and mean and gross as anybody else. Whedon's odyssey shone a particular spotlight on that group of people whose fury over a Marvel character seems as good an excuse as any to lash out and say stupid things on Twitter. They don't represent anything but the very loosely formed but thriving population of sad, angry people who like to yell at stranger on the Internet. And you can be sad to not have Joss Whedon in your Twitter feed any more, but you can't pin this one on feminism.