Yet another "South will rise again" teen: White parents, it's time to get serious with your kids about the horrors of slavery 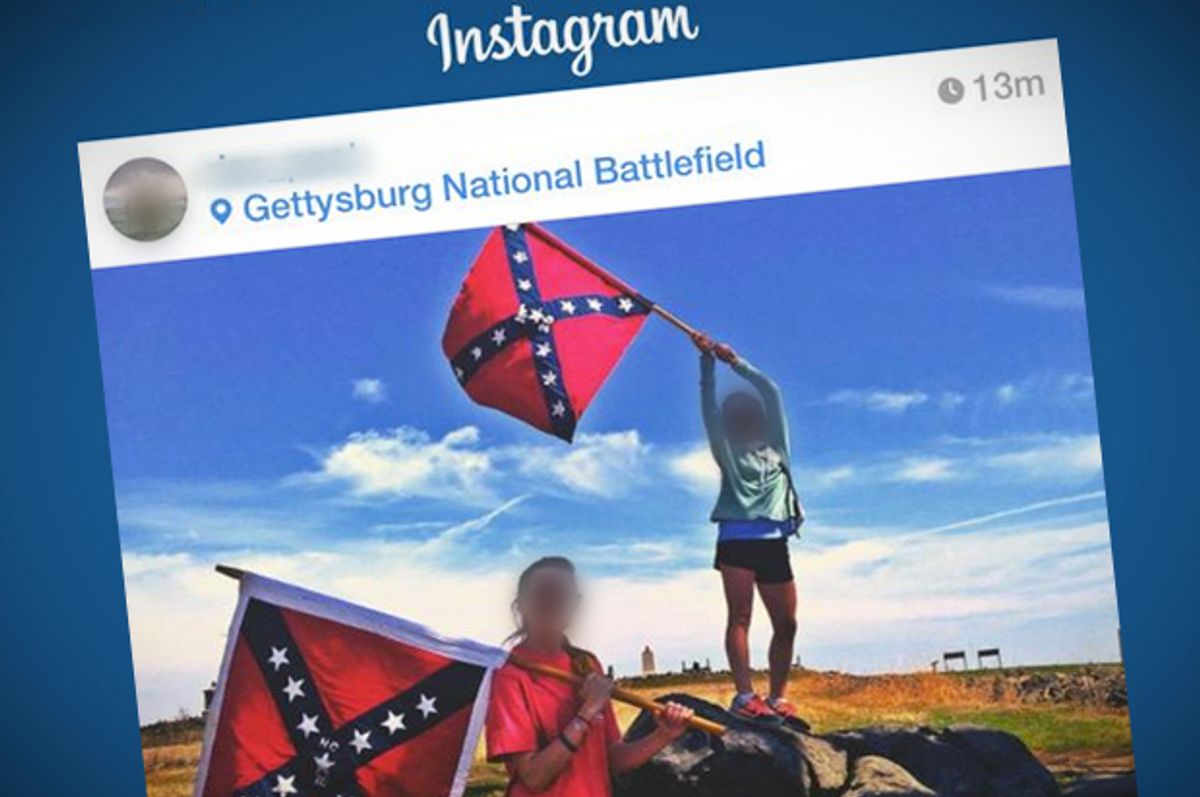 You wouldn't think this would need to be stated, but teens, you really ought to cool it with the Confederacy worship on your social media.

Just earlier this week, a group of Colorado high schoolers became national news after they posted a photo on Facebook of themselves on prom night, holding guns and surrounding a Confederate flag. The caption was "The south will rise again." Now, a pair of North Carolina teens is making headlines for a strikingly similar social media faux pas.

The trouble began after an East Chapel Hill High School class trip to the Gettysburg National Battlefield, when a photo cropped up on Instagram of two girls brandishing flags and the caption "South will rise." Under it, another student cracked, "Already bought my first slave." On Wednesday, a group of local parents and educators held a press conference outside Chapel Hill-Carrboro City Schools offices, and things got intense when Ron Creatore, the father of one of the girls, showed up to defend her actions. "That posting was not intended to offend you," he told a visibly upset African-American woman. Chapel Hill-Carrboro City Schools' superintendent Thomas A. Forcella, meanwhile, wouldn't comment directly on "any consequences for the students involve" but said in a statement, "Students are guaranteed the same rights as all citizens. Having said that, we agree that there is still much work to do. The implications, and sometimes unintended consequences, that arise on social networking sites need a more deliberate approach. Implicit bias does exist in all of us, regardless of our race."

It's fair to say that sure, bias exists in all of us, but I'll tell you this — if you do a search on Instagram for #southwillriseagain or #confederate, you will not see any dark-skinned people. Not a single one! So maybe don't play the "Bias is everybody's problem" card this time. And while it's disturbing and thoroughly unacceptable that, as Creatore says, his daughter is now "dealing with people threatening her life and calling her some unseemly names," this is not a good moment for the family to go on the defensive about their actions. Creatore says, "She didn't at the time post it with any intention it was going to be perceived as racist… They want to use this photograph and my daughter's involvement in this photograph as a vessel to promote a particular agenda. I won't stand for my daughter being suspended because I don't believe she's done anything wrong." And he adds, "I want the person who has a 17-year-old who has never had never make a mistake to be the one to judge her." How about just an unconditional apology? Perhaps that would help everybody get past this thing?

It doesn't help that the girl herself has issued a doozy of a sorry-not-sorry, stating, "I'm sorry that my picture offended people and especially since my initial caption (that I changed once I realized people took it seriously), but I'm currently on the Civil War trip learning about the history of our country and this just so happens to be a pretty (expletive) important part of it. We were reenacting Pickett's charge in which the South lost 85% of their soldiers. These aren't the Confederate flags in fact, they're the North Carolina regimental flags. I'm proud to be a part of my state and I'm sorry my photo was so offensive but I find it appropriate in that I'm honoring heroes that fought to protect their home and families. Thanks though." Again, maybe just stop after "I'm sorry."

Creatore is right that kids make mistakes. They are not a demographic famed for keen sensitivity. So here's what you do. You teach them. If you can't prevent them from screwing up, you show them how to take ownership of their errors and you educate them about empathy. Because I haven't heard a word yet from Creatore or his daughter that acknowledges any understanding of why that symbol, and why that phrase "South will rise" might be offensive and painful to someone else. And unless you understand what you're apologizing for, you're not really apologizing at all.