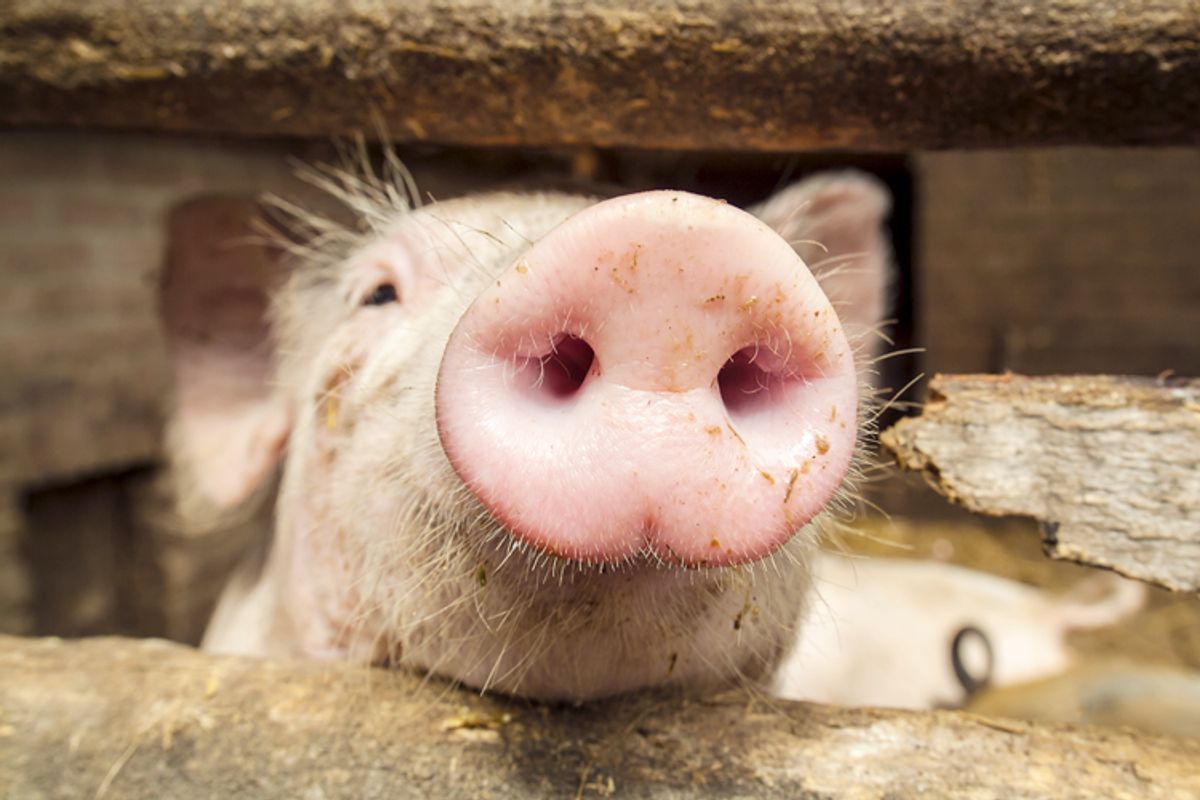 We love pigs -- they make bacon and sausage and ham, and they are also pretty adorable. Despite this odd human ability to compartmentalize both those aspects of the animal, pigs have been vitally important to human development for thousands of years. Mark Essig, a historian at Cornell University, recognized the vital importance of swine, and wrote "Lesser Beasts: A Snout-to-Tail History of the Humble Pig" to tell their story.

Salon spoke with Essig about pigsties and dirtiness, ethically raised meat and why we love pork so much.

How did you develop your interest in pigs? What made you want to write a book?

I moved to Asheville, North Carolina, about eight years ago, which is a town in the middle of the Appalachian Mountains, and there are pig statues in the middle of downtown, which was curious to me. So I started reading some local history. I’m a historian by training, and I read about these extraordinary pig drives that used to come through town. As many as 100,000 pigs walking on the hoof from Tennessee down to South Carolina every winter. My first reaction was just sheer delight, I loved the weirdness of it. Who knew that you could herd a pig or that they would walk that far? Then I just wondered how you did this. So I started looking into that and then I just started following the pig further and further and it opened up a lot of fascinating questions about food and the meanings that we give food and the strange relationships that we develop with animals.

A lot of your book is the role that pigs have played in human development throughout history. Why have they been so important?

I’d say pigs have been so important to history because they are useful in ways that other livestock animals are not. I would start with the fact that they reproduce so quickly. A cow gestates for nine months and usually just gives you one calf that takes a year or two to grow big enough to kill and eat. But a pig gestates for less than half that long, just four months, and will give you six or eight or 12 piglets, and sometimes even more. Each of those grows to slaughter weight in about half the time that it takes a cow to get there. So if you want to produce a lot of meat really quickly, then the pig is your animal.

Then paired with that is that because of the characteristics of the meat, it cures really well in salt and smoke. So if you take a pig and you take the pork and you salt it, then it gets even better. It becomes bacon or ham or sausage. Whereas beef or mutton, when you salt them they tend to get rather leathery. So what that meant was that you could store that meat for long periods of time, even before artificial refrigeration, which has existed for just a blink of the eye in terms of human history. So you could pre-slaughter meat, you could store it at room temperature, which was a good way of warding off starvation at times when going hungry was a real problem.

The other advantage of the pig is that they are omnivorous. They’ll eat just about anything people will eat, and lots of things we won’t. A cow, you need pasture where they will eat grass or other plants. But a pig, you can turn them loose in the forest and they’ll eat acorns, or by the sea and they’ll dig up clams in the mudbanks, or often throughout history they’ve been on city streets finding plenty of food in garbage or even human waste and sewage that’s spilled into the street. So they’re so versatile. They can be raised just about anywhere, virtually for free, on any sort of waste materials. So they became particularly important for poor people who could raise them just on waste and get a nearly free source of food.

How did the pig become so associated with dirtiness? I would imagine it comes from what you just said.

Yeah, that seems to be it. It goes really far back. We associate that view mostly with the Jewish Bible in the book of Leviticus, that said the pig is unclean. But it was really true of just about everybody in the ancient Near East, whether it was the Mesopotamian region or Egypt. There was almost nobody in that region who used pigs for any religious purpose. Nobody ever sacrificed pigs to the gods. If you were of a certain class then, you didn’t eat pigs. When the Jews set down that religious proscription on pork, it was thoroughly in line. There’s never a clear statement in the Bible, “Don’t eat pigs because they eat shit.” But there’s lots of references in many texts that talk about the habits of pigs, that they scavenge corpses in the streets, which makes them unclean, which means that anybody who wants to remain clean enough to serve the gods should avoid them at all costs. So pretty much the only people in that region who were eating pigs were poor people, because they couldn’t afford to be fussy in their food choices and pigs were still very efficient at producing the food that these poor people needed to eat.

And the association just went on. The Romans, by contrast to the Jews, they love pigs and fixed them in all kinds of bizarre ways. They sacrificed them to the gods. There’s a few reasons for that, but I think the most important is that the Italian peninsula had both water, so there were oak forests where the pigs could forage, and Rome was rich, so they could import a lot of grain and feed that to the pigs. So the pigs, they lived cleanly, they ate a clean diet, they tasted good and so the Romans didn’t associate them with filth. They associated them as an abundant and delicious source of food. The way I phrase it in the book is that you’ve got the Jewish pork hatred and Roman pork love, and we’ve varied between those two poles throughout the rest of Western history, trying to figure out whether these are delicious and wonderful, or filthy and to be avoided at all costs.

Bringing us into today, what is the dilemma of modern pork that you talk about, and how should we change the way we interact with our pigs?

I would say the dilemma of modern pork is really the same qualities that made pigs so useful as an animal of subsistence, that made pigs so important to poor people from Medieval Europe to American colonists to American pioneers. It was that they reproduce so quickly, their meat stored so well. So the same qualities that made pigs useful in subsistence farming also made them useful in industrial farming. Cows, they still need to spend a fair amount of time on pasture eating grass because they grow more slowly. But pigs, because they’re slaughtered now at less than six months of age, the way we raise pigs has been thoroughly industrialized in a way that raising cows and sheep has not, which means they’re raised indoors. They never set foot on mud, they stand on hard, slatted floors. They trample their waste into these sewers below them. They often spend all their time in the dark because it’s cheaper not to light it. The sows probably have it worst because they spend their entire lives confined to these tiny crates called “gestation crates” that are about 2 feet by 7 feet. They’re kept in those pens at all times. The only times they go out is to go to a slightly larger farrowing crate in order to give birth, and then they go back to a gestation crate to get impregnated again.

So I guess the dilemma is that we have gotten really good at producing meat, producing pork very cheaply, but it comes at a very high cost to the pig. So I would say the dilemma would be are we willing to spend a little more, or even a lot more in some cases, to ensure that the food we’re eating was raised in ways that we’re comfortable with?

So what are we supposed to do?

The what are we to do, I can tell you personally that I now strictly avoid any meats unless I know where and how the animal was raised. Obviously it means more expense, for me it means eating less meat, which is also probably a good thing for the planet as well. There are still plenty of ways of raising animals less intensively, more humanely, but it generally involves spending more on them. But as I see it, that’s a trade-off that’s worth it.

I’m wary of sounding holier-than-thou when I talk about this. A lot of the story of the pig is the story of disgust, that they eat disgusting things and they wallow in filth, so a lot of the rejection of pigs historically has been not rational at all, but simply a question of being disgusted by these creatures. I think of the rejection, or at least my rejection of industrialized pork of being along the same lines. I’m disgusted by the conditions that these pigs are made to endure. That’s why I don’t eat them, just because it’s, I’m trying to find a better way to say it, but it’s gross. The industrial production of meat is based on keeping things hidden away from the public and having spent quite a while learning about this, it’s not hidden away from me. So I can’t do it anymore.