From Julia Roberts to Blake Lively, Letterman has definitely had his favorites over the years 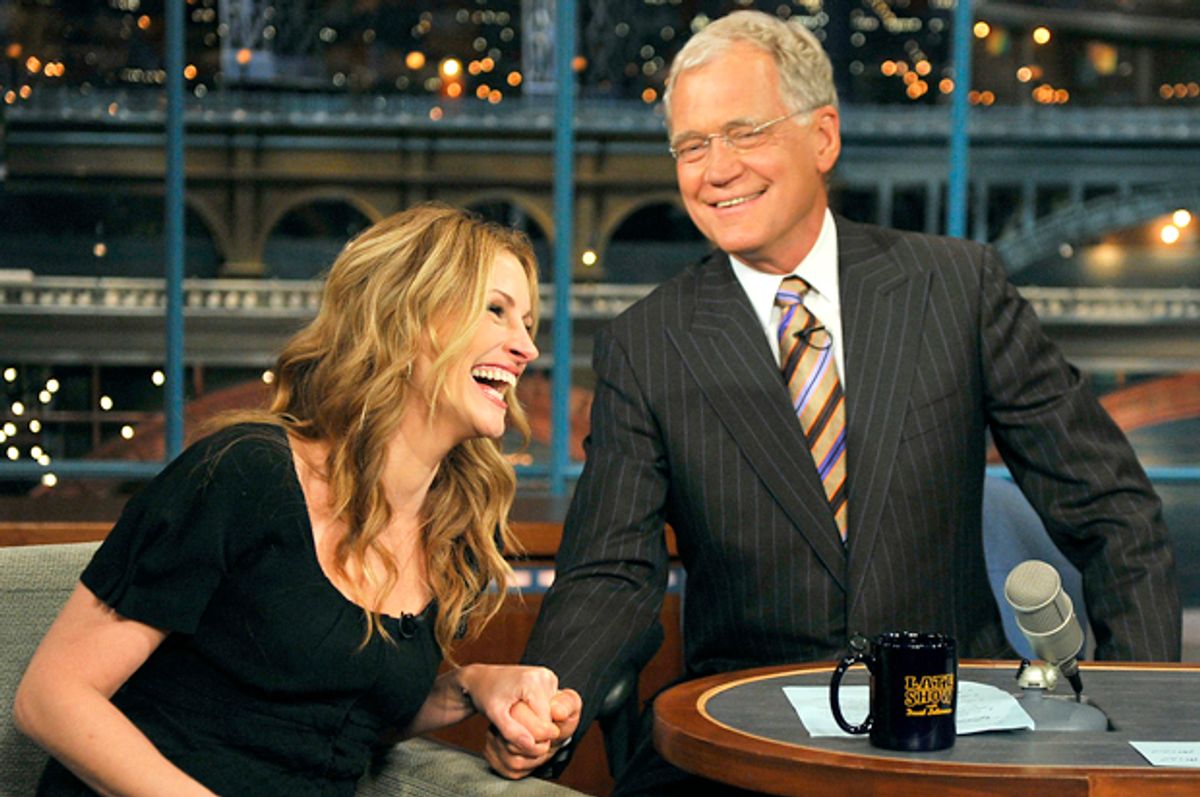 It’s no secret that David Letterman loves women, a penchant that has had some unpleasant consequences over the years (alas, nobody has forgotten 2009’s sex scandal in which he admitted to multiple affairs with female staffers). But Letterman’s crushes usually manifest themselves on his show in more innocuous ways, as the notoriously flirtatious, occasionally sleazy late night legend charms, flatters and lightly creeps on some of his favorite female guests. Here’s a look at some of Letterman’s biggest crushes throughout the years.

Teri Garr
Despite his many verbal dalliances, few pairings have enjoyed better chemistry than Letterman and longtime guest Teri Garr. “I’m in love with this woman, I’d marry this woman in a second if she’d have me,” he observed before one of her early appearances. On another occasion, he gave her a once-over and pronounced, ”I’d like to get a can of Windex and go to work." Years later, the fondness remains; when Teri, who now suffers from MS and recently recovered from a brain aneurysm, appeared on the show in 2008, Letterman sweetly held her arm and guided her to her chair. It was very sweet — well, until Letterman went there: “I enjoyed the opportunity to grab you inappropriately.”

Amy Sedaris
Sedaris has been on "The Late Show" a whopping 34 times, and while sometimes Letterman’s attentions can feel a little over the top, the chemistry between these two is genuinely sweet, and Amy always manages to make Dave laugh. Seriously, look at them — they love each other.

Serena Williams
On the less-sweet end of the spectrum, Letterman could barely contain himself when Serena Williams came on the show in a low-cut red dress.“I think I saw your eyes almost pop out there,” said Williams, to which Letterman responded: “Well, I think so … That’s not the only thing.”

Haim
Letterman has rarely seen as genuinely happy as he was when Haim came on the show last year, telling Paul Shaffer gleefully that “the girls are here!” After the performance, the fawning continued, with Letterman imploring the band to move to New York and Este, arm around him, responding flirtatiously, "I'm just waiting for you.” “Paul, let’s go!” said Letterman. It was a total love fest.

Drew Barrymore
Barrymore and Letterman’s years of flirtation kicked off when a young and wild Barrymore flashed Letterman during an appearance in 1995. She’s grown up since then — on a recent appearance, she flashed only her tongue ring — but the chemistry remains as present as ever.

Natalie Portman
Whenever Portman appears on Letterman’s show -- more than 15 times to date -- he can't help fawning and showering the actress with compliments (Movieline even made a video history of Letterman flirting with her). As he said after seeing “Black Swan,” "I looked at this thing, and anyone else who thinks they got a shot at being nominated or winning an award, they should just go see this movie, because they're not even gonna be close to this." (For what it's worth, she won.)

Solange
Letterman loves checking out his female musical guests; he does it so often that Village Voice made a listicle about it. One such occasion was Solange’s 2013 performance on the show, after which Letterman kissed her on the hand and proposed they go on a joint comedy-music tour together. According to Letterman, she would “kill, just blow the roof off the dump, and then backstage, it’ll be horseplay, what do you say?”

Blake Lively
Letterman’s 2008 interview with Blake Lively was so charged that Gawker proclaimed “the sexual tension between the two was not only palpable, it approached the level of David Addison and Maddie Hayes” (the post, by the way, was bluntly titled "David Letterman Wants to Tear the Clothes off of Blake Lively"). Lively, who in the past admitted that Letterman was her childhood crush as well as saying that he was in the same “league” as Leonardo DiCaprio, turned things up a notch when she appeared in 2009, floating the idea of a polygamist marriage between her, Letterman and Julia Roberts. Plenty of thigh-fondling, chin-touching and eyelash-batting ensued — from both sides.