Dudebros yelling at the camera: Your "F her in the P" heckling days are over 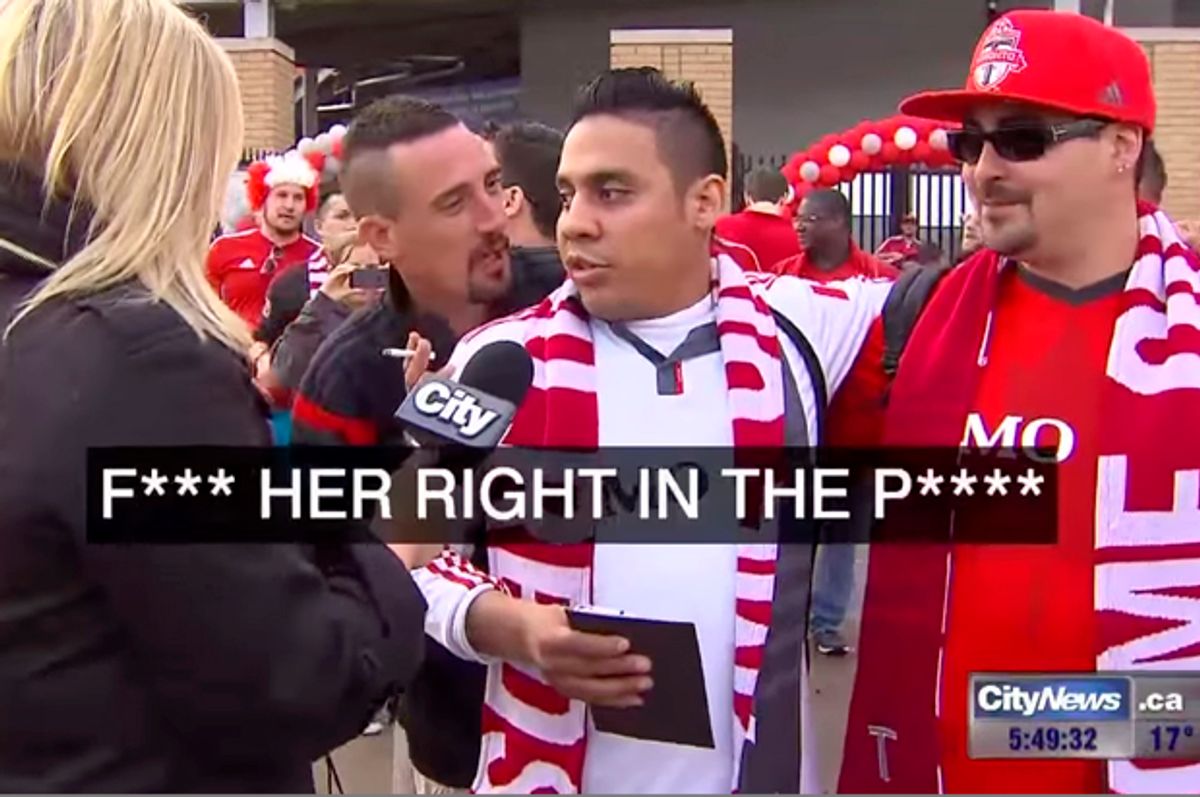 The abiding rule of thumb when it comes to the gross people of the world is to just ignore them. It's not like they're capable of rational, respectful dialogue. It's not like pointing out that they're gross is going to make them be not gross. As the wise saying goes, it's like playing chess with a pigeon — they're just going to crap all over everything and act like they won anyway. But every once in a while, patience has its limits. And it is so, so satisfying to watch. So can be we give a huge thumbs up to CityNews reporter Shauna Hunt, for not, this time, just gamely ignoring the dudebros who tried to mess up her report from a Toronto FC soccer game on Sunday?

As the Telegraph reports in an opening sentence designed to make your breakfast come up, "It has become a thing for people to interrupt live video broadcasts to shout into the mic "f__k her in the p___y". A thing. An actual thing that idiots do and then giggle about. All over the world. I could point out that that's not actually a joke, but hey, why bother. I could point out that it's extremely hostile to women, but I'm pretty doubtful anybody who's entertained by that sort of thing has the interests of making this world a better place for women at heart. But when Hunt, who CityNews says has "patiently endured several instances of the degrading phrase before" had it happen this time, she'd had enough.

Hunt had been setting up to go live for broadcast and talking to fans outside the venue when a man walked up and uttered the phrase into her microphone. And then she did a surprising thing. She turned from the men she was talking to and said, "Hold on," confronting the group who'd been standing nearby. "So were you guys waiting around to see if you could could 'F her in the P' me on live TV?" she asked. "Can I ask why you would want to do something like that?" Believe it or not, the gentlemen did not have an especially compelling argument for their choice.

A sunglasses-sporting lad explained, "I feel like it's quite substantial." Hunt replied, "Seriously, it's a disgusting thing to say. It's degrading to women. And you would humiliate me on live television?" When he asked, "Are you actually filming this?" she replied, "I'm sick of this. I get this every single day, ten times a day, by rude guys like you." Sunglasses guy reasoned, "It has nothing to do with you. It has everything to do with everyone else." And another fan told her, "You're lucky there's not a f___ing vibrator in your ear like in England because it happens all the time." Yeah, why isn't she thanking him for his restraint?

The men did not appear to walk away from the encounter with their consciousness raised. They seemed as pleased with themselves as ever, and they may well remain ever so. But by highlighting the incident, Hunt and her employer have revealed the crap that many other journalists have had to endure for a long time now — and plenty of females who aren't television reporters hear on a daily basis just walking down the street.

CityNews says that "Several female reporters at CityNews have been targeted with the sexual vulgarity," and the Calgary police add, "It violates section 175(1)(A) of the Criminal Code: 'a disturbance in or near a public place, (1) by fighting, screaming, shouting, swearing, singing or using insulting or obscene language.'" Normally, I am a firm supporter of the right to drop F-bombs whenever and wherever, but if the only thing these clowns understand is the fear of real consequences, then I'm down for it.