I'm Christian and happy that atheism is on the rise: America's right-wing theocracy needs to chill 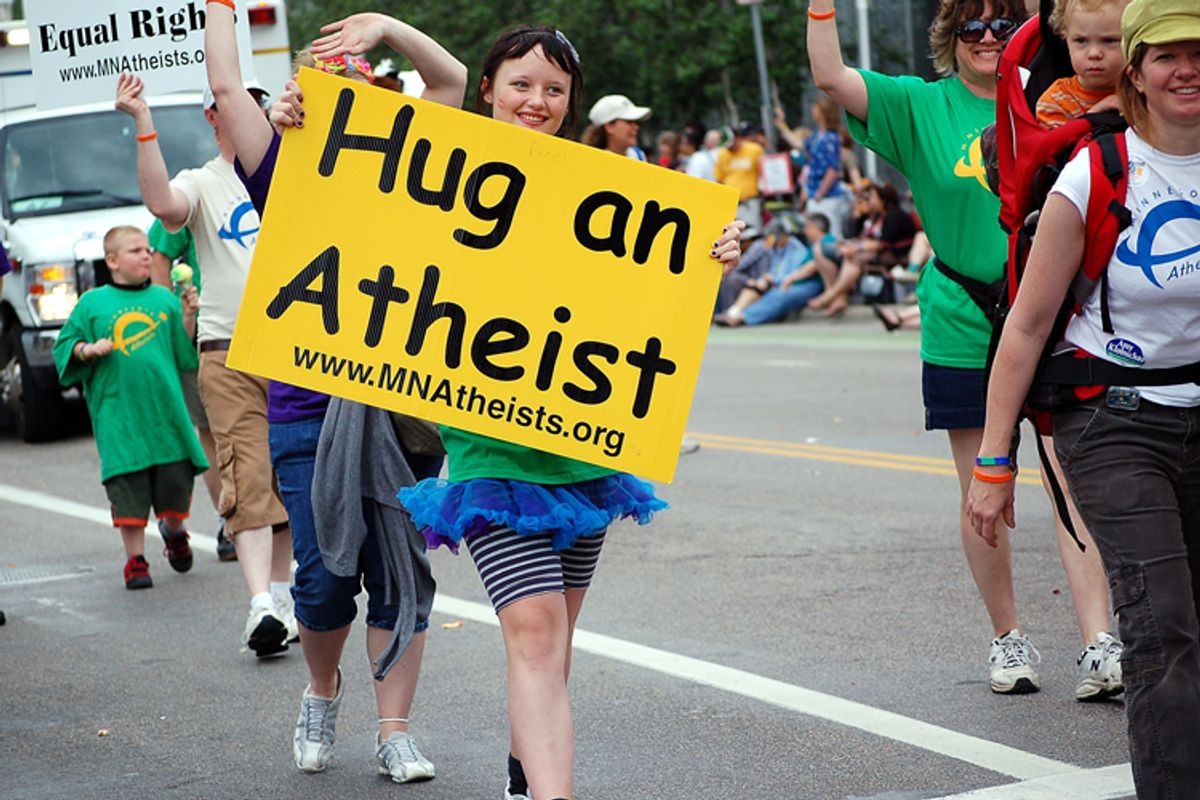 A new report released this week from the Pew Research Center reveals what you've probably already been noticing over the past few years — a sharp turn in American culture toward secularism. As Pew notes, "The Christian share of the U.S. population is declining, while the number of U.S. adults who do not identify with any organized religion is growing" — particularly among young adults. "The percentage of adults (ages 18 and older) who describe themselves as Christians has dropped by nearly eight percentage points in just seven years." And as a practicing Catholic raising her children Catholic, I see this as cause for cheering.

I live my life according my values and spiritual beliefs. I have in my neighborhood a community that includes my local church, a place that gives my family and me support and personal satisfaction, and that I hope we in turn can contribute something meaningful to. We also live in a bigger world, full of people who are different than we are, who believe — and disbelieve — different things. Diversity: it's just plain common sense.

We at a moment in American history when issues that should be pretty basic rights — you know, like access to reproductive health service and the freedom to marry the person you love — are being thrashed around on entirely religious grounds. As Think Progress reports just this Tuesday, "More than half of Texas have faced at least one barrier to getting the reproductive health services they need." We are still, right now, dealing with teachers in public schools peddling a Noah's Ark version of life sciences. That's all about inserting God, in particular a very narrowly defined vision of God that a diminishing number of people believe in, into public policy. It's stupid; it's dangerous and it's patently unpatriotic.

Our constitution is supposed to protect us from living in a theocracy. One of our original founding fathers, Roger Williams, was a deeply religious man -- who first espoused the notion of the separation between Church and state. You can totally practice your beliefs without imposing them others. You can — and must — respect and observe the distinction between personal convictions and common good. And the more people who can pipe up and speak to the reality that Jesus did not create the United States of America, the better. Because I am really, really tired of old white dudes hiding behind a cross and to screw over everybody else.

There's something else too. I want those of us who look at the world one way to understand, on the regular, that we are not the default. I want people who are questioning and skeptical and straight up non believing to not feel invisible. As Pew points out, "The United States remains home to more Christians than any other country in the world, and a large majority of Americans – roughly seven-in-ten – continue to identify with some branch of the Christian faith." So you know what? We're fine here. We don't need to fear being wiped out in some secular apocalypse. And while sure, there are blowhards and bigots on all sides, an America in which people who don't subscribe to a religion don't feel the need to pretend they do is a better and more balanced America for all of us. And because I value not evangelicalism but coexistence, today I just want to say, thank God for nonbelievers.