"Mad Men" and Big Business: How the show's unabashed conservative capitalism drew us in

As Roger tells Joan: "It's only about the money" 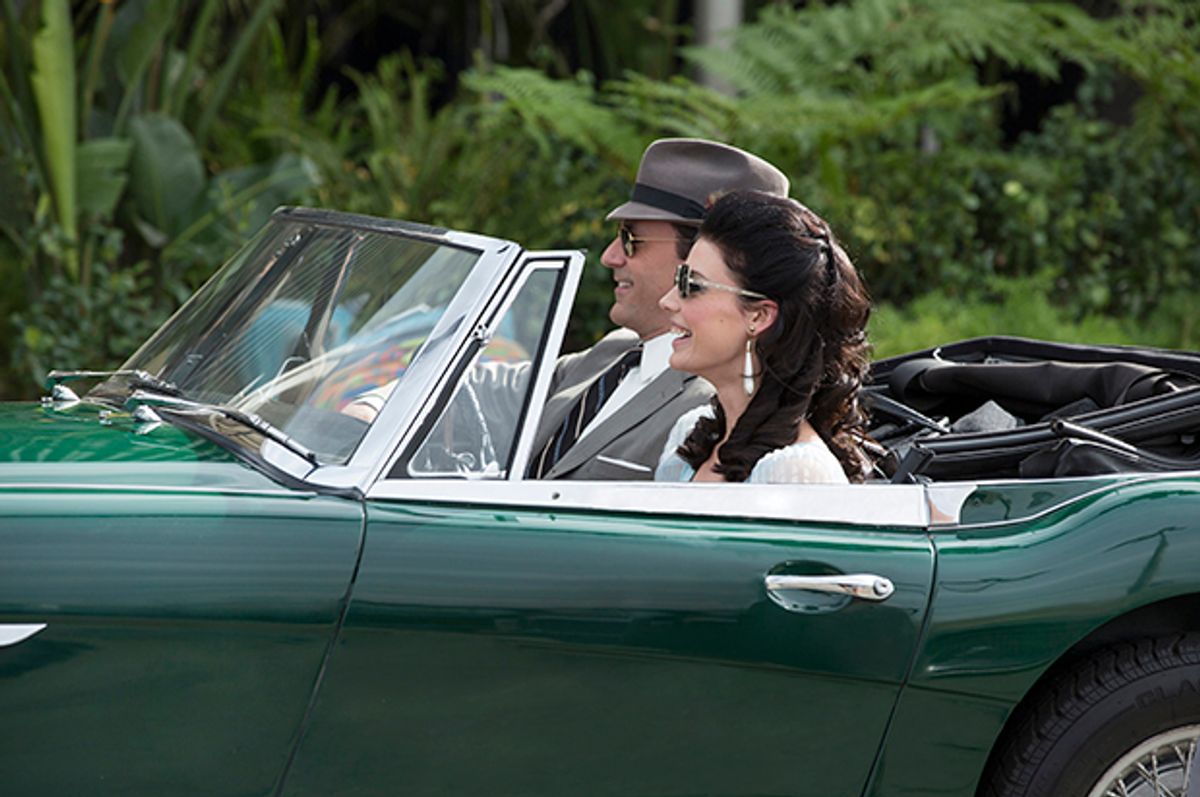 There was a moment in the “Mad Men” episode “Lost Horizon," the third-to-last episode of the series, when it appeared as if the narrative would become overtly political.

After being subjected to an umpteenth bout of icky sexual harassment, this one from a male superior with a sheen of smarm thick enough to abrade with a butter knife, Joan Harris (Christina Hendricks) seems poised to embrace the kind of feminism that she and colleague Peggy Olson (Elisabeth Moss) have only previously flirted with. In a meeting with the head honcho at McCann Erickson, the advertising conglomerate that’s retained her services not because they value her talents but because she came as part of a package deal for Don Draper, she not subtly insinuates that if the firm doesn’t buy her out of the lucrative contract she earned as a partner at SC&P dollar for dollar, she’ll file a complaint with the Equal Employment Opportunity Commission. She invokes feminist Betty Friedan and the ACLU. It’s a direct and poignant moment charged with palpable electricity and unexpectedness.

The moment was also, alas, short-ived. A few scenes later Joan, with some coaxing from Roger Sterling (John Slattery), the silver-spooned lothario most responsible for sacrificing SC&P’s autonomy in return for gobs of money, agrees not to pursue legal action in return for a buyout that will award her only half of the cash she’s owed. So Joan walks out of her McCann Erickson office for seemingly the last time, depriving viewers of the possibility of watching her wage feminist jihad against a sexist industry that’s enriched her bank account without appreciating her abilities. In retrospect, this shouldn’t have come as too much as a surprise, considering Matthew Weiner’s meditation on the art of the sell has always been more interested in the maneuverings of the corporate boardroom than the political themes of the era in which it’s set.

Since its inception, “Mad Men” has received high praise for unabashedly depicting the subtle ways sexism, racism, anti-environmentalism, and nonchalant alcoholism manifested themselves during the years when America thought of itself as nothing more than a collection of nuclear families living the American dream amidst leafy green suburbs. It’s always been dubbed an “important” show because of a willingness to tackle “important” issues and for representing the commonplace yet damaging slights suffered by women and minorities on a daily basis. Its most ardent supporters even suggested the show was progressive, that because it forced viewers to confront the ugly truths hidden behind the myth of post-World War II America it championed a liberal viewpoint. Yet this accolade has always failed to recognize that “Mad Men”’s depictions of sexism and racism, as well as the occasional nods to the political turmoil of the 1960s, have always served as window dressings, superficial ways to ground the show in a certain era while it champions a far less progressive ideology: the unfettered accumulation of wealth as a worthwhile pursuit.

More than any other prestige television drama of television’s Golden Age, “Mad Men” embodies the “socially liberal, fiscally conservative” mind-set that has enjoyed such a steadfast vogue within America over the past two decades. The narrative has often made a point of foregrounding the hardships female characters like Joan and Peggy face while trying to carve out respectable careers in a business environment accustomed to treating women like objects, but it carefully couches those struggles within the idea that a cushy, high-paying job, not a principled victory for women’s rights, is the desired end result. The 1960s was a decade fraught with radical political thought. Citizens questioned the efficacy of capitalism, President Lyndon Johnson skewed toward socialism in a manner that hadn’t been seen since the Great Depression, and the counterculture rejected the notion that a corner office and two-story suburban house was the apotheosis of personal success. Yet in the world of “Mad Men,” concerns rarely venture outside the office. The biggest questions, whether a partnership with a binding contract or uncertain employment status with a generous salary is the more desirable situation, have nothing to do with politics and everything to do with celebrating a pro-business mentality in which making money takes precedence over all else. It’s not easy to set a show in the 1960s and marginalize the political struggles that defined that era, yet that’s exactly what Weiner and his team of writers have done since day one.

No character better embodies “Mad Men’s" fashionable political dichotomy than Don Draper, the raging alpha male who dominates the show to such a degree AMC could have been forgiven for insisting it be named "Mad Man." Don has always demonstrated a willingness to break certain glass ceilings and social conventions, but only whenever doing so helps him craft a more effective sales pitch or better his business. When he’s introduced in the pilot episode, he’s talking cigarette preferences with a black waiter no other white patron would even think to acknowledge, not because civil rights are on his mind but because he’s trying to get a leg-up for a presentation to Lucky Strike. He promotes Peggy from secretary to copywriter when he realizes the potential she has to help him craft better ads—and he’s condescending to women who lack Peggy’s knack for business. He writes an editorial excoriating the tobacco industry only after his firm loses its biggest cigarette account. He looks the other way after finding out a co-worker is gay, then unleashes a disgust-laden diatribe filled with phrases like “you people” when that co-worker’s unwillingness to endure sexual harassment threatens an account. He confesses opposition to the Vietnam War in private but would rather write copy for Dow Chemical, the manufacturers of napalm and Agent Orange, than protest on the streets.

Like an untethered kite, Don drifts in whatever direction the prevailing winds of business take him, embracing the moments when that direction meshes with his naturally progressive tendencies but never allowing those tendencies to dictate his next course of action. For its first few seasons “Mad Men’s" primary motif was the true meaning of personal identity and the psychic tolls Don endures for harboring the secret of Dick Whitman. But once that cat got out of the bag without wreaking havoc on any of the characters’ lives, a more insidious theme replaced it, one that had always been present in some semblance but became the only consistent undercurrent amid the otherwise capricious narrative directions the show has traversed. That theme is the desire of Don and his partners-in-crime to chase money and prestige at all costs, to “build a business,” in the words of Don. If you go back and rewatch “Mad Men’s" first four seasons, you’ll see that references to the amount of money Don earns first as a creative director at Sterling Cooper, then a partner, and then a founding partner at Sterling Cooper Draper Pryce, are woven into scenes almost as frequently as sly references to alcoholism, smoking and sexism. And so many of those early episodes hinge upon Don’s ability to craft ads that will convince everyday Americans to buy hoards of stuff they probably don’t need, exalting the ability to sell products, regardless of their merit, to the level of genius.

And while Don has always set the tone for “Mad Men’s" relationship with the pursuit of business success, the female characters have been more than willing to follow in his footsteps. On some level, Peggy Olson’s story is an uplifting fable about how natural talent and hard work can overcome double standards and other hurdles to success. But like Don, Peggy just craves professional success. She’s in it for the money, not some idealistic cause. Her brushes with the anti-commercialism counterculture—a relationship with a leftist journalist, a friendship with an avant-garde photographer—function as means to broaden her understanding of a changing cultural landscape so that she may write more relevant copy. When asked what she wants to accomplish in her career, landing a big account and creating a nationally recognized catchphrase are the most notable goals she can muster.

Like Peggy, Joan has pulled herself up from the bootstraps and bettered her life and the life of her family, and in recent seasons she’s demonstrated she's as money-driven as any of the characters. She even turns on Don at one point, siding with a fellow executive who wants to kick Don out of the agency. The reason? She’s tired of Don costing her money.

This is not some screed framing “Mad Men” as a worthless piece of dreck. Films and television shows do not have a responsibility to advance certain worldviews while censuring others. “Mad Men” is a great television show—maybe the best ever—and like Martin Scorsese’s "Wolf of Wall Street," it turns a close examination of a charismatic and greedy huckster into art of the most affecting kind. But “Mad Men” is, as Salon's own television critic Sonia Saraiya wrote, “a period piece in every way—it’s a show about the 2010s that happens to be set in the 1960s.” It’s a window into the soul of contemporary America, an increasingly corrupt society so blinkered by the notion that being rich is a virtue unto itself, that it can’t see how the mainstream acceptance of greed is rotting away civic virtues. There’s a reason “Mad Men” has resonated so deeply with contemporary audiences and it has nothing to do with our resurgent interest in skinny ties and old school cocktails. “Mad Men” speaks to America’s current relationship with capitalism and money, a relationship that, to paraphrase journalist Jason Whitlock, doesn’t judge people on how they earn money but judges those who don’t have any money at all.