White people, take responsibility for your Waco thugs: Black Americans are tired of being the country's conscience 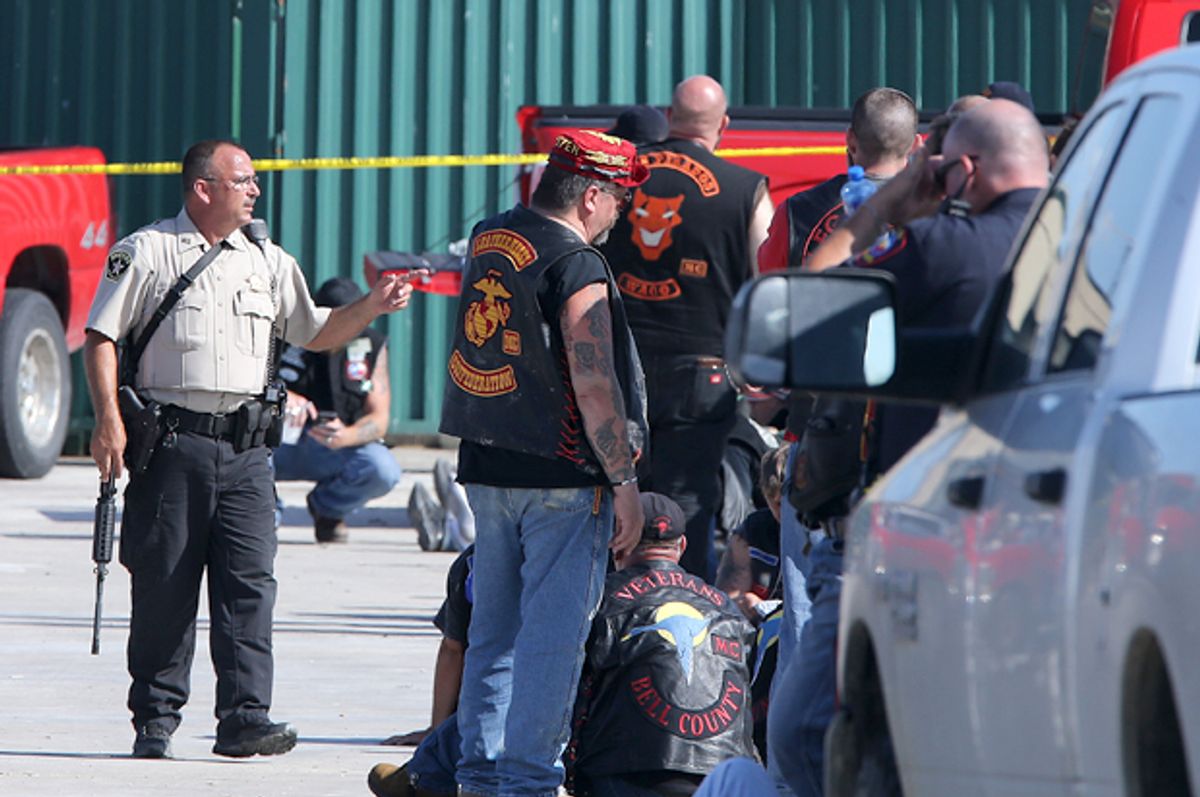 Authorities investigate a shooting in the parking lot of the Twin Peaks restaurant Sunday, May 17, 2015, in Waco, Texas. (AP/Jerry Larson)
--

On the uptown R train to Manhattan, I stood in the corner of the crowded subway car, beginning my morning commute like everyone else. Depending on my mood, or space allowed, I might read a book or people-watch as I’m listening to music on my smartphone. On this particular morning, I pulled out my phone and began to read articles I saved to the app Pocket. (I’m not a paid sponsor of Pocket, but I am a fan, and if you are inundated with online articles, Pocket is a lifesaver.) One of the articles, the first in my reading list, was an update on the Twin Peaks shooting in Waco, Texas, where rival bike gangs—thugs— took to the streets and participated in a gunfight, leaving nine bikers—thugs—dead.

I’ve since deleted the article, so I cannot link to it here. I deleted it without reading in full. I deleted it in disgust, and audibly sucked my teeth as I tried to read—maybe I consumed two paragraphs, tops—before giving up altogether. When you’ve read the same narrative over and over, the same tired tropes and words and phrases used, you lose patience with the story and move on. No shade to the article itself, nor toward its writer, but you get tired of seeing other people, other stories, afforded the dignity rarely given to your people—my people—black people.

To be clear, the article was boilerplate. Less “think piece” and more run-of-the-mill journalism, a rundown of facts and the latest information concerning the shooting. On Sunday, May 17, a fight broke out between the Bandidos and the Cossacks, rival biker thugs who have engaged in street warfare since the late 1960s. The article continued to outline the facts: again, nine people dead, at least 170 people arrested with bail—bail??—set at $1 million each. The article moved on to a bit of a history lesson, taking the readers down a veritable memory lane where the origins of the gangs began decades ago.

Where the article soon lost me was its fair and balanced reporting, oddly enough. The biker gangs—thugs—often shirked off the “gang” label and instead opted for “biker clubs” because, from what I could tell, they often participated in legal, legitimate activities, such as motorcycle advocacy (admittedly, I didn’t know motorcyclists needed advocates) and motorcycle safety awareness (a noble cause, I must confess). I don’t doubt the claims that legal, even rewarding, gatherings occurred within and perhaps between these gangs. That said, both the Bandidos and Cossacks have long been suspected in activities unbecoming of mere clubs advocating the use of motorcycle helmets.

Straight from the U.S. Department of Justice’s website, specifically its Organized Crime and Gang Section, “The Bandidos Motorcycle Club is an OMG (outlaw motorcycle gang) with a membership of 2,000 to 2,500 persons in the U.S. and in 13 other countries. The Bandidos constitute a growing criminal threat to the U.S. Law enforcement authorities, [who] estimate that the Bandidos are one of the two largest OMGs operating in the U.S., with approximately 900 members belonging to 93 chapters. The Bandidos are involved in transporting and distributing cocaine and marijuana and are involved in the production, transportation and distribution of methamphetamine.” Advocates indeed.

Back on the subway, I deleted the article and placed the smartphone in my jeans pocket. There is always this imbalance or unfairness in the media, specifically here in the U.S., where whites are time and again afforded individuality — that is, the dignity of being judged on individual merits, whether altruistic or insidious — versus the burden shouldered by people of color, often black Americans, who are asked to account for the shortfalls of an entire race, nationality and/or religion. Terrorist shootings and bombings by Muslim extremists are often followed by white media outlets asking for—demanding—apologies and denouncements by Islamic leaders.

Here at home, scathing civic outrage over continued mistreatment by local police, leading to “riots” in Baltimore, for example, must be denounced by black leaders and thinkers, and stamped down with an antiseptic, whitewashed, mythologized version of Dr. Martin Luther King Jr—white people’s patron saint of nonviolence, despite being gunned down by a white person for his revolutionary proclamations that equal rights for black people was essential, and long overdue, and paid for with black bodies enslaved and brutalized—brought out on cue, coupled with cries for calm. This ran through my mind as I read, then deleted, the article.

One has to think of privilege as a self-contained, self-propelled endeavor. The white privilege of individuality afforded to the biker gangs—thugs—and their murderous shootout as an isolated incident, as a singular event or, perhaps, even one of many events confined to the gangs themselves, as opposed to the larger white American population, is ingrained in the American imagination, indeed perhaps around the world. It is a privilege that one doesn’t have to give up even in its acknowledgment. The privilege of white privilege means you can denounce its application without relinquishing it.

Which makes this kind of piece—this one, right here, the one I’m writing—useless, to some degree. Or maybe “useless” is too heavy of a word. “Ineffective,” perhaps? There is this echo chamber, or cipher, in which the unprivileged—me—is supposed to speak to the privileged, the veritable masters of the universe, and point out the flaws, the unfairness and indignities, separating the two groups. It has become the job of the victim to expose racism, then lead a conversation on it and really, one has to wonder—to what end? More than 100 white men—including the few men of color, displayed prominently on a couple of news websites—brandished weapons, shot at each other in a public restaurant, left nine of each other dead, and … what should be said?

How do I make you give up your privilege to see the disgusting inequity in news coverage, how biker thugs become “gangs,” then “clubs,” despite being listed as organized crime organizations? Why should I, or anyone like me, lead this discussion? What do you care if 100 bikers shoot at each other? It’s not endemic of a larger, deeper flaw in the white American population. And if it is, white privilege then becomes the impenetrable shield like a cocoon. There will be no #AllLivesMatter marches in Waco, Texas. There will be no calls—demands—for denouncements. There will only be us. People of color. Attempting to have another one-sided conversation for the greater good. Because that is our role as the so-called conscience of America. But should you feel the need to change this narrative, then yes—please—denounce the gangs. Apologize. Repent for the actions of your people. Or not. That is your privilege. Enjoy.