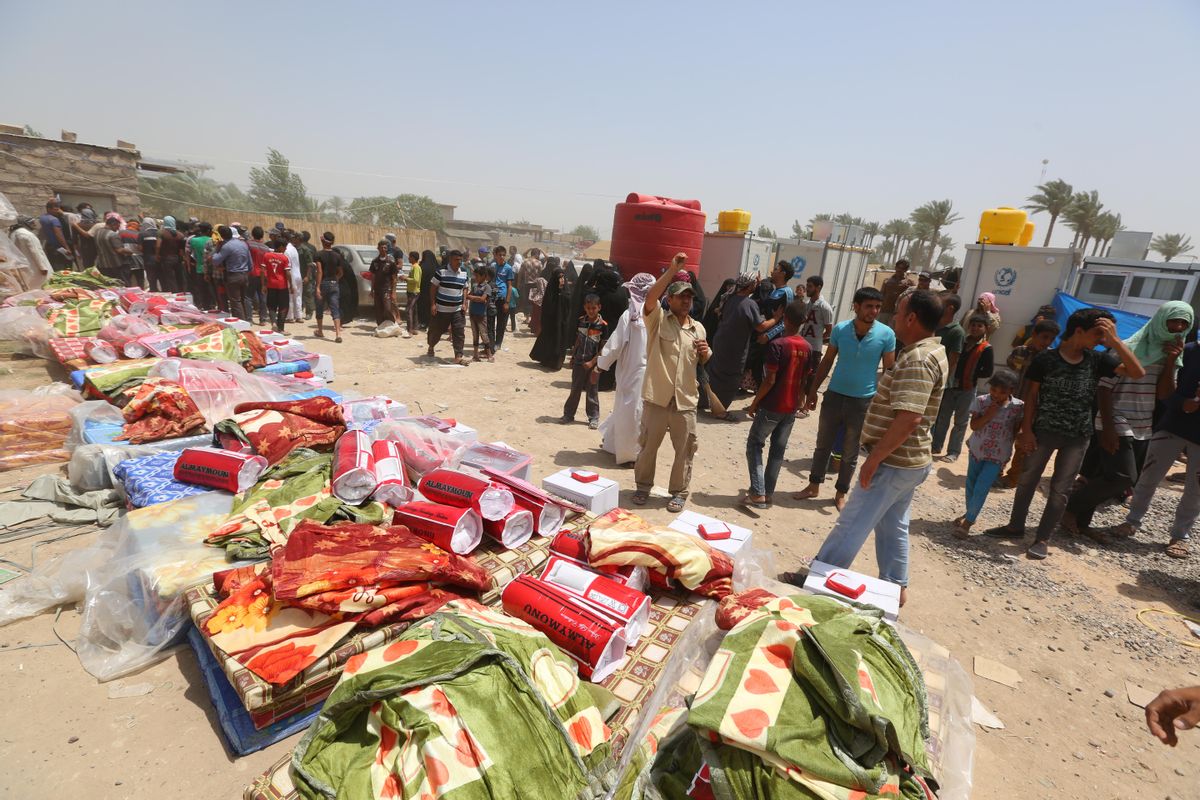 Displaced civilians from Ramadi wait to receive humanitarian aid from the United Nations in a camp in the town of Amiriyat al-Fallujah, west of Baghdad, Iraq, Friday, May 22, 2015. The United Nations World Food Program said it is rushing food assistance into Anbar to help tens of thousands of residents who have fled Ramadi after it was taken by Islamic State militant group. (AP Photo/Hadi Mizban) (AP)
--

Two U.S. defense officials said Iranian forces have taken a significant offensive role in the Beiji operation in recent days, in conjunction with Iraqi Shiite militia. The officials were not authorized to discuss the matter publicly and spoke Friday on condition of anonymity.

One official said Iranians are operating artillery, 122mm rocket systems and surveillance and reconnaissance drones to help the Iraqi counteroffensive.

Iran's role in Iraq is a major complicating factor for the Obama administration as it searches for the most effective approach to countering the Islamic State group. U.S. officials have said they do not oppose contributions from Iran-supported Iraqi Shiite militias as long as they operate under the command and control of the Iraqi government.

Friday's U.S. military statement quoted Brig. Gen. Thomas Weidley as saying that over the past three days Iraqi security forces and federal police have made "steady, measured progress" in regaining some areas leading to the Beiji refinery compound, in the face of suicide vehicle-borne bombs and rocket attacks. Weidley, chief of staff of the U.S.-led military headquarters in Kuwait, recently described the oil refinery as a "key infrastructure and critical crossroads."

The U.S. statement said Iraqis, enabled by the U.S. and its coalition partners, have "successfully cleared and established a ground route" into the refinery to resupply Iraqi troops. It listed U.S. and coalition contributions as including airstrikes, reconnaissance and the use of "advise and assist elements."

Asked about the newly emerging role of Iranian forces in Beiji, the U.S. command in Kuwait declined to comment directly, citing "operational security reasons." It added that all forces involved in Beiji are "aligned with the government of Iraq" and under the control of Iraqi security forces.

Separately, the Pentagon said Friday that the cost of U.S. military operations in Iraq and Syria since U.S. airstrikes began in August is $2.44 billion as of May 7.

IS fighters recently gained substantial control over the Beiji oil refinery, a strategically important prize in the battle for Iraq's future and a potential source of millions of dollars in income for the militants. They also control the nearby town of Beiji, on the main route from Baghdad to Mosul, along the Tigris River.

The militants' move on Beiji largely coincided with its successful offensive in Ramadi, the capital of Anbar province, last week. Iraqi forces withdrew from Ramadi on Sunday, leaving behind large numbers of U.S.-supplied vehicles, including several tanks. The U.S. said Friday that its airstrikes in Ramadi overnight hit an IS fighting unit, destroying five armored vehicles, two tanks and other military vehicles, as well as nine abandoned tanks and other armored vehicles.

Together, the Ramadi and Beiji losses have fueled criticism of the Obama administration's Iraq strategy and prompted the White House to authorize an acceleration of U.S. weapons transfers to Baghdad, including expedited shipments of 2,000 shoulder-fired missiles for use against armored suicide vehicles.

Iran had contributed advisers, training and arms to Iraqi Shiite militias in an attempt to retake the city of Tikrit in March, but that effort stalled. In April, after the U.S. joined the effort with airstrikes, Iraqi security forces and allied Shiite militias succeeded in regaining control of the city.

Tony Cordesman, a Middle East expert at the Center for Strategic and International Studies, said that while some in Tehran see the advantages of a Shiite-led Iraqi government that deals equitably with the Sunni and Kurdish populations in order to achieve national unity, Iranian hardliners do not.

"At best, they are still pursuing a policy of competing with the United States for military influence over the Iraqi military and police, Shiite militias, and even influence over Iraq's Kurds," Cordesman wrote in an analysis published Thursday. "At worst — and 'at worst' now seems more likely than 'at best' — Iran's leaders are seeking an Iraq where Iran has dominant influence" after the Islamic State threat has been overcome.