The U.S. military is a national security threat 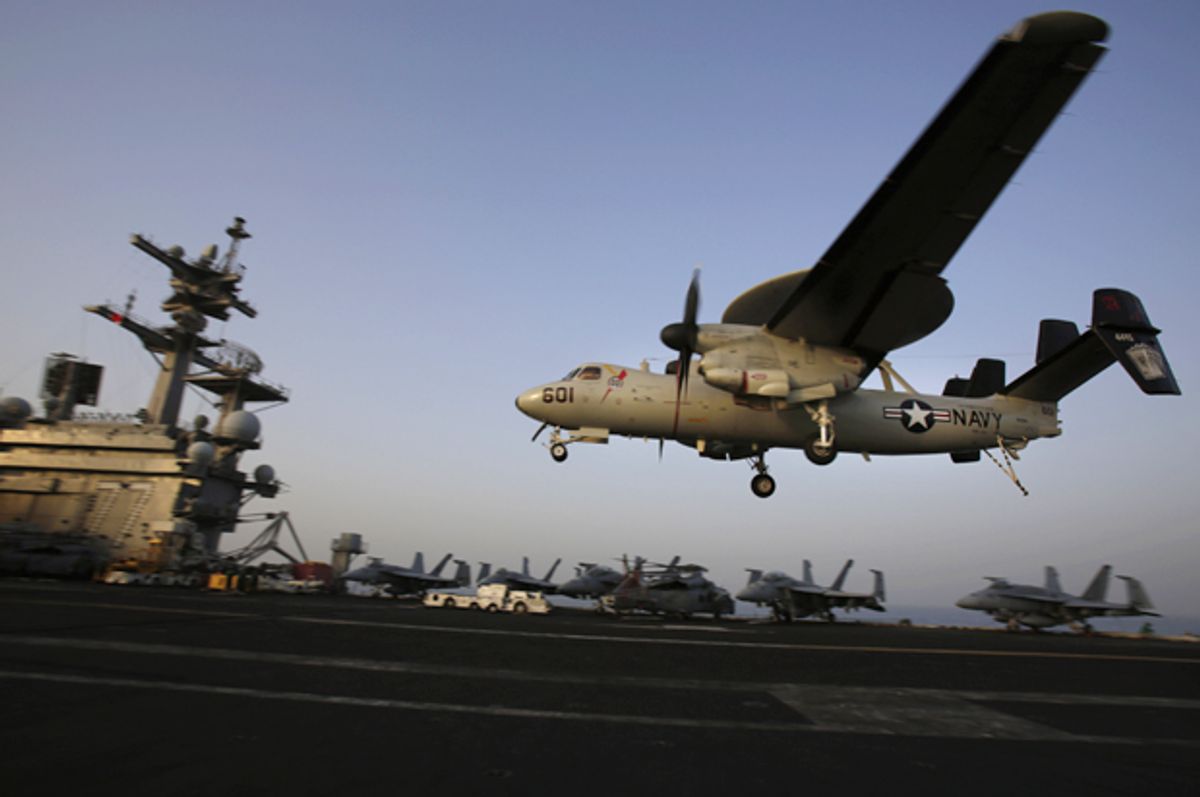 The American military budget is massive.

At $610 billion, it dwarfs the combined military budgets of China, Russia, Saudi Arabia, France, the UK, India and Germany (see chart below). Put another way, one third of all military spending the world comes from the United States. The problem is, however, that the American military budget may be crowding out other crucial investments. As the era of American hegemony winds down, it’s more important than ever for America to be able to demonstrate soft power. That means first, an American model that works, for other countries to emulate. But further, it means a highly educated population, long-term investment in infrastructure, adequate healthcare, an society based, above all else, on opportunity. However, it’s likely that the military budget precludes these important services.

The most important cost of our bloated military budget is investment in other important government functions. As the chart below from CBO shows, defense spending has historically consumed more than half of the entire U.S. government discretionary budget (spending on veterans eats up mandatory spending as well). In 2014, discretionary defense spending was double Medicaid spending, and about equal to Medicare spending. Given that the U.S. is already a relatively low-spending country, the military only further diminishes our meager  safety net.

The chart below shows that not only does the U.S. spend comparatively less of its GDP on government than other developed countries, military spending (the white/grey bar) takes up far more of it. That means America spends less on general public services, environmental protection and education than otherwise. But these services are key to America’s ability to remain a global leader. Further, it means that American women are more likely to die in childbirth than women in China and our infrastructure pulls down global competitiveness. America spends far less than other rich countries on foreign aid, and dedicatesonly 1 billion dollars, a sliver of its budget to international affairs. In 2011, the Brookings Institution worried, “the United States is following an unfortunate path that other big countries, such as the former Soviet Union, have already taken in history, wasting too many resources and too much national wealth on military expansion, wars, and foreign interference.” The effect of our outsized budget is felt in other ways. Surplus goods are often sent to local police offices, who end up with grenade launchers, weaponized aircraft and “tank-like armoured vehicles.” Concomitantly, police killings have increased (according to the best data available) and the police have begun to seem like an occupying force. This has a profound effect on trust in civic institutions and the police. As trust in police officers decreases, they find it harder to do their job and the community grows even more skeptical. There’s also the likely possibility that the availability of military force makes it more likely, by making non-military means less attractive.

The current conception of national security is far too limited. As violent deaths from war and terrorism decline, the greater threat to Americans is their failing infrastructure, costly healthcare system and incoherent environmental policy. The Obama White House has warned on numerous occasions that climate change and shoddy infrastructure are a deep threat to American national security. In 2007 a report by numerous high-ranking military leadersfound, “Global climate change presents a serious national security threat which could impact Americans at home, impact United States military operations and heighten global tensions.” The Pentagon has been worried that climate change is a national security threat since even earlier, releasing a report in 2003 discussing the implications of global warming. The Department of Homeland Security has consistently warned that aging infrastructure is a national security risk. Worryingly, however, the United States has devoted increasingly less money to infrastructure, and in the future, this will only grow worse. Josh Bivens of EPI finds that every proposed budget in 2013 except the Progressive Caucus budget, would dramatically decrease public investment as a share of GDP.

In addition, our ability to lead by example is threatened by poverty, homeless and rampant inequality. A recent survey found that internally, the view that America’s economy is the leading one has declined dramatically. The American model looks increasingly unappealing to emerging economies, who have seen the American middle class become less vibrant and more straddled with debt. The New York Times recently reported that the American middle class was no longer the world’s richest.  Matt Bruenig notes thatfurther down the income distribution, America does even worse: the poorest 5th of Americans have less disposable income than those in 14 other countries. Finally, without a highly educated population and an innovative economy, America will no longer be able to exert the soft-power necessary as our hard-power advantage declines. Even Americans are increasingly skeptical of the American model, with a 2012 survey finding that 63% believe the American economic model is broken.

Our bloated defense budget is taking away money that could go to more important things. As I’ve noted, just two years funding for the massive, $1.5 trillion F-35 fighter jet could fund free community college for all students for a decade. Americans need to realize that today, the larger threat they face is their own fear leading them to underinvest in vital services. As Franklin Delano Roosevelt famously warned, “the only thing we have to fear is… fear itself.”