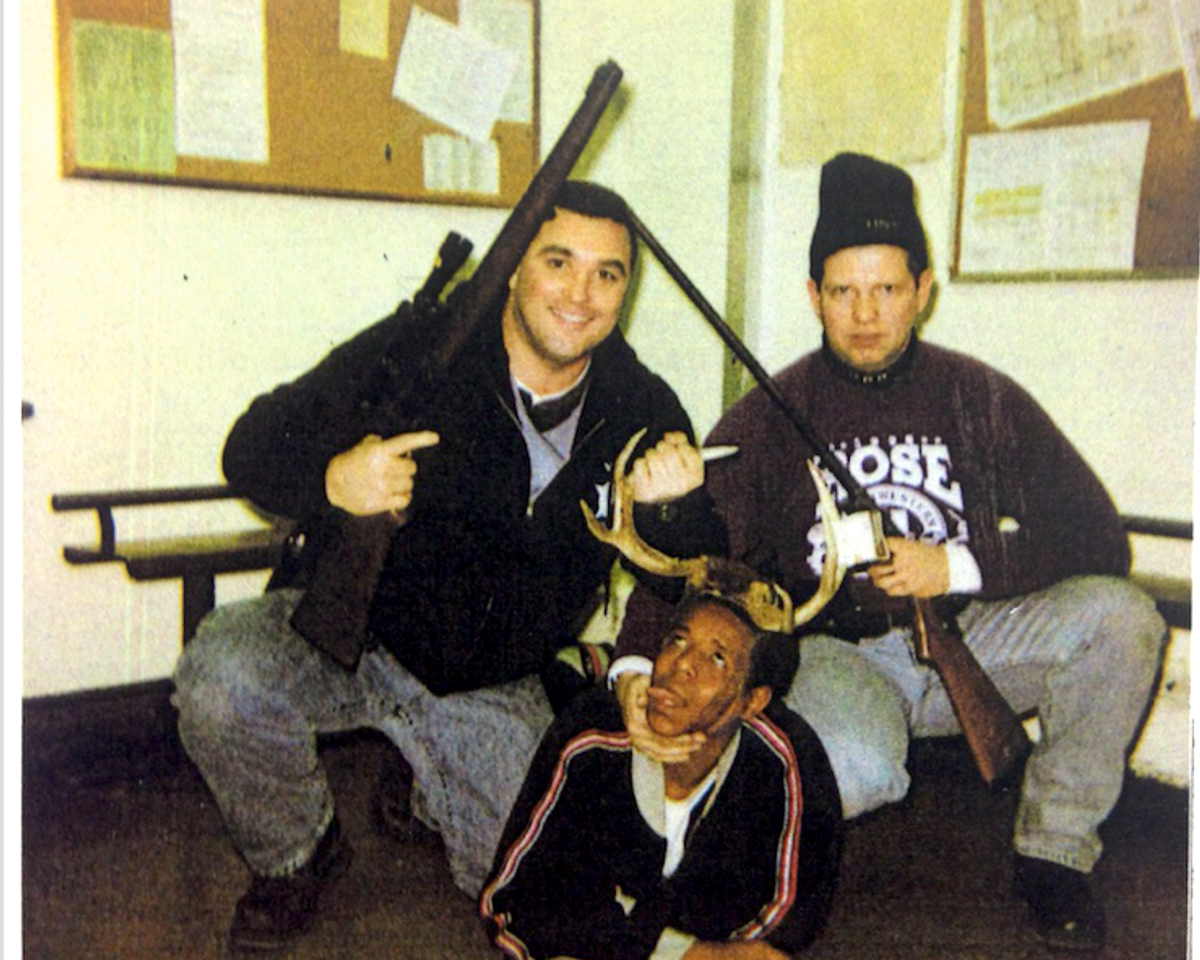 A grotesque image recently made public by a Cook County judge shows two former Chicago police officers holding rifles and posing next to an unidentified black man, who is shown wearing fake deer antlers and sticking his tongue out, as if he had been hunted and killed.

According to the Chicago Sun-Times, the Chicago Police Department requested that the racially charged photo, which shows former officers Timothy McDermott and Jerome Finnigan standing over the man, remain sealed in court documents. Judge Thomas Allen, however, denied the request in March, after police Supt. Garry McCarthy moved to fire McDermott. He has since been removed from the force, but appealed his dismissal earlier this year.

Believed to have been taken in a West Side police station between 1999 and 2003, the Polaroid photo was given to the city by the feds in 2013 and resulted in McDermott, a clout-heavy cop, being fired last year by the police board in a 5-to-4 vote. The four dissenters said McDermott should only have been suspended. But a majority of the board wrote that “appearing to treat an African-American man not as a human being but as a hunted animal is disgraceful and shocks the conscience.” [...]

Federal prosecutors gave the photo to police investigators in 2013 about two years after Finnigan — the notorious other cop in the picture — was sentenced to 12 years in prison for leading a crew of rogue cops in robberies, home invasions and other crimes.

Law enforcement officials have condemned the photo, which appears publicly for the first time amidst overwhelming tension between police departments and communities of color across the country. In Chicago, police officers came under fire earlier this year for allegedly operating "black sites" across the city, where suspects and witnesses were reportedly held for extended periods of time without public records and likely in violation of their constitutional rights.

McCarthy has reportedly enforced new measures to improve community relations, and told the Sun-Times the picture is "disgusting, and the despicable actions of these two former officers have no place in our police department or in our society."

"I fired one of the officers and would have fired the other if he hadn’t already been fired by the time I found out about the picture," McCarthy said. "Our residents deserve better than this, as do the thousands of good men and women in this department."

Neither the Chicago police bureau nor the FBI have been able to identify the African-American man in the photograph, for whom McDermott and Finnigan never filed an arrest report. Both officers admitted to appearing in the picture, however, with Finnigan describing the decision to take it as "spur of the moment." He also claimed to have released the man without arresting him, after discovering he had no serious criminal background.

McDermott's attorney, Daniel Herbert, has attempted to use the man's lack of identification to his client's benefit. In his closing arguments at the former officer's police board hearing, Herbert claimed that without more information, there is no way to assume the photo was taken without consent.

"What’s to say this individual wasn’t performing at a Christmas pageant in the district and was dressed as a reindeer and had taken the reindeer suit off?" Herbert said. "Again, I don’t mean to make preposterous arguments, but the charges in this case, they warrant that."

McDermott's next appeal hearing is in June.