Rock amid the rubble: California crumbles in ludicrous "San Andreas," but Dwayne Johnson, of course, saves the day 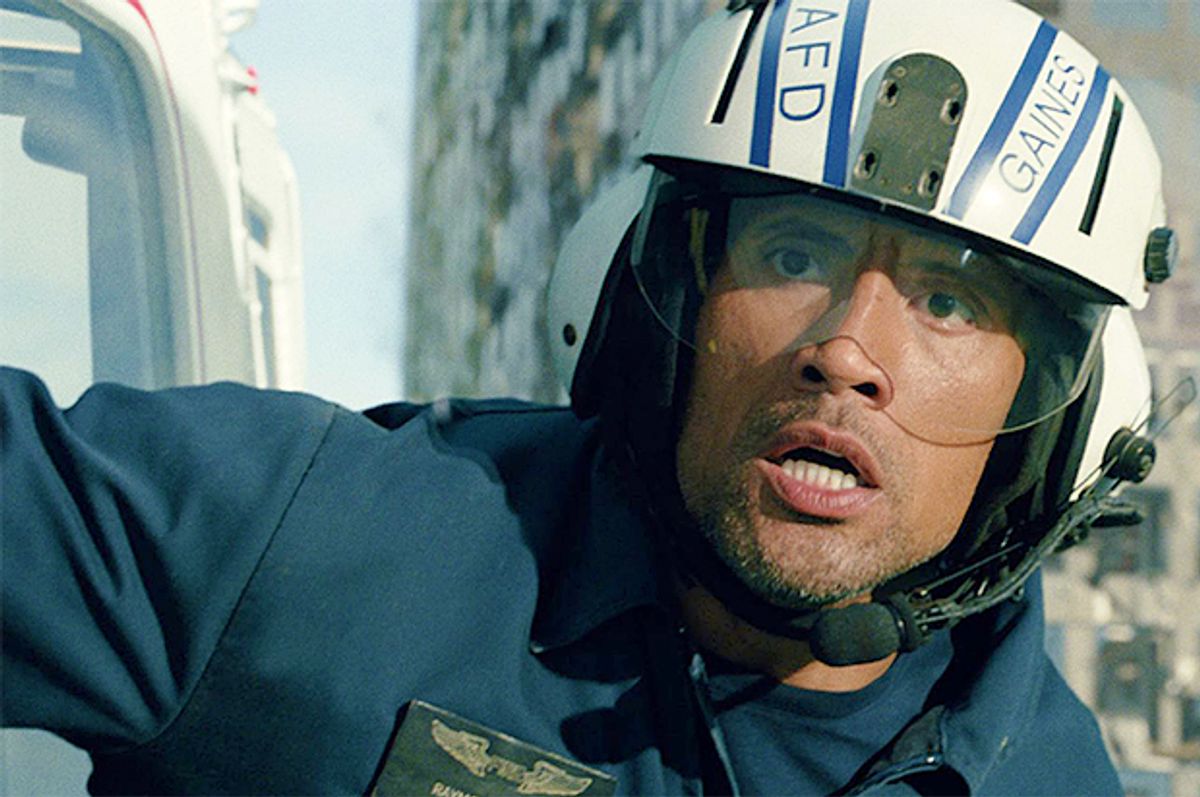 Considered as pure spectacle, “San Andreas” is gripping and effective, as well as a somewhat interesting form of counter-narrative: A vision of near-term apocalypse that has nothing to do with climate change, monsters or alien invaders. This movie begins with a thrilling rescue sequence featuring debonair Dwayne Johnson at the controls of a Los Angeles Fire Department chopper, saving an attractive young woman who is trapped in her car in a precipitous canyon off Mulholland Drive. The sequence of huge earthquakes that will reduce California’s two greatest cities to rubble and slurry hasn’t even started, and we’ve pretty much seen the movie. Danger and disaster are still a test of masculinity, but the model of masculinity has shifted a little: A new kind of manhood is in vogue, or maybe it’s the old kind with a few moral and epistemological nips and tucks.

So as you can already see, “San Andreas” isn’t just pure spectacle, even if it contains some of the best scenes of CGI destruction in the recent Hollywood tradition, delivered with much more weight and realism than in Michael Bay’s mind-numbing “Transformers” movies, for example. Like nearly all Hollywood movies, it carries an ideological message – and like all Hollywood movies in an age where most of Hollywood’s money is made overseas, that message is bafflingly vague. There’s a bit of flag-waving towards the end of “San Andreas,” and a passing reference to the idea that the wars in Iraq and Afghanistan might not have been entirely pointless – because crucible of manhood, something something – but mostly the message is that dad-type guys are still cool in this era of modified gender relations, and the nuclear family can still be redeemed.

I’ve got no problem with the biologically generated nuclear family, honestly. I’m the partial proprietor of one of them myself. But the disaster-movie template so rigorously observed by “San Andreas” – the first A-grade Hollywood flick for Canadian director Brad Peyton, from a script by TV veteran Carlton Cuse – reeks of desperation, or maybe just deeply ingrained ludicrousness and laziness. Thousands or perhaps millions die as Los Angeles and San Francisco are virtually leveled by a string of 9-plus Richter events along the San Andreas Fault. But Ray, the Iraq vet turned LAFD rescue stud played by Johnson, essentially throws away all his emergency-responder life-saving responsibilities to search for his estranged wife, Emma (Carla Gugino), and their adult daughter, Blake (Alexandra Daddario).

Is this the new model of manhood that the movie star formerly known as the Rock has been cooking all this time? Because it’s something like Maggie Thatcher on steroids: There’s no such thing as society, you jabronis! Know your role! Ray can fly fly a helicopter like a boss, and a crop-duster plane too. He steals an already stolen pickup from some skinhead and “borrows” some rich dude’s badass powerboat. He knows how to skydive, how to outwit an incoming tsunami and where to stay safe in a collapsing stadium. (The San Francisco Giants’ overly precious waterfront baseball park is only one of the city’s numerous landmarks to be shredded, squished, blended, sliced and diced.) But everybody else in California can go jump in the state’s suddenly exposed central butt crack, basically, because Ray’s comin’ for his daughter.

Among this movie’s casting oddities we have the fact that Johnson and Gugino are both 43 years old in real life, making them an unusually age-appropriate couple for the movies – while Daddario, who plays their daughter, is 29. Interesting story there, guys! While I don’t want to go deep on this question, I will also mention the delicate topic that Blake is, um, pretty much white, and does not look not as if she has a father who is part African-American and part Pacific Islander. Then again, other people’s families, even when fictional, are arguably none of my business. So we’ll leave that there.

Johnson is one of the most inherently likable figures in contemporary celebrity-land, and the story of his improbable rise from NFL washout and pro-wrestling “heel” to avatar of manhood is an interesting one. He’s like a G.I. Joe doll, implanted with a high grade of self-regarding artificial intelligence. From his early days on Vince McMahon’s wrestling circuit as the Rock, Johnson always appeared to be in on the joke, and to possess a strange combination of mockery and niceness that made him stand out. “Finally – finally! – the Rock has returned to Oshkosh!” he would announce with a beatific glow, affecting not to notice the lusty boos raining down from the citizens of Oshkosh. All by himself, Johnson almost rescued the incomprehensible mess of Richard Kelly’s unfinished magnum opus “Southland Tales” with pure good cheer, playing the dim but endlessly supportive boyfriend to porn star and sports-drink entrepreneur Sarah Michelle Gellar.

So the thing is, as hoary and retrograde and pure-dee downright stupid as the story of “San Andreas” may be, you can’t help rooting for Ray to get back together with Emma and Blake and start life anew, in a state with far fewer residents and its most important cities reduced to rubble. The drought problem and the Republican electoral dilemma, both solved in one go! (I’m here all week, but don’t eat the three-bean salad!) At the same time, I can’t help thinking that Johnson is just a little too smart and interesting for this kind of deeply forgettable formula fare, which will make a ton of money this month and never be seen again by anyone. Paul Giamatti, character schlub par excellence, earns a decent paycheck as the seismologist who sees this all coming, and I’m sorry we don’t see more of Kylie Minogue in a teensy, bitchy cameo that threatens to eat the whole movie.

We’re not even quite to June – and this is the next-to-last of the really big summer flicks, with only “Jurassic World” left to go! (What’s that you say? “Ant-Man”? Did you really just admit that you’re gonna be scrunching up the beach towel with your toes, and wishing it wasn’t so long until “Ant-Man”?) There’s a lot more to say about the way that Hollywood is pushing forward into new technical terrain – the effects here are awe-inspiring at times – while sliding backwards in narrative terms and at best sideways when it comes to depicting social reality. I don’t begrudge anyone their desire to melt their brain with this bullshit extravaganza, and don’t begrudge Dwayne Johnson his exorbitant salary. But don’t try to tell me that the naked wish fulfillment of “San Andreas” isn’t profoundly messed up: We know our country is doomed, and I mean we know it, on a bone level. But somehow or other we also think our kids will grow up and be cool and it’s all totally fine. The coming disaster is for other people.