Welcome to feudalism, America: How the 1 percent is systematically destroying the middle class

As wealth continues to consolidate at an alarming rate, working stiffs are ever more indebted to the rich 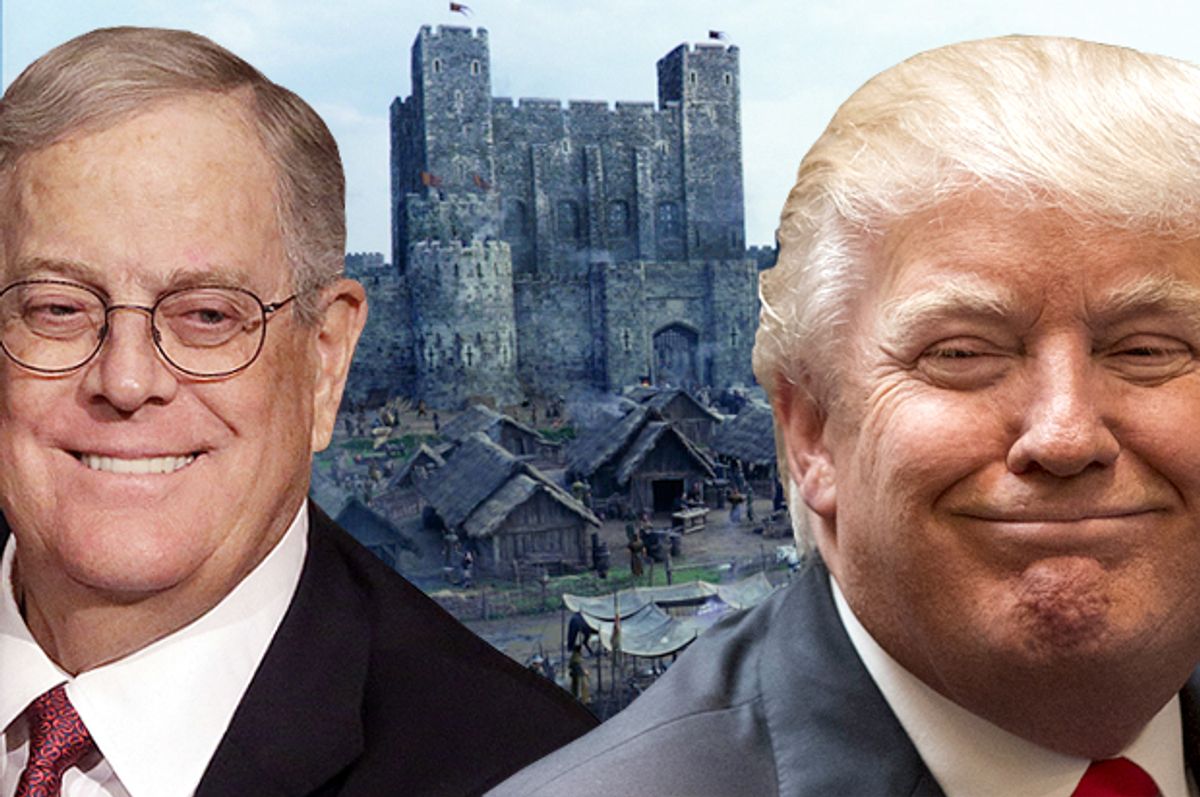 The idea of a property-owning democracy has long roots in American political thought. In their book, "The Citizen’s Share," Joseph R. Blasi, Richard B. Freeman and Douglas Kruse argue that the Founding Fathers wanted everyone (well, everyone who was white and male) to own a small slice of property. Both Madison and Washington praised the relatively equal distribution of property in the United States (compared with Europe). Thomas Jefferson wrote, “It is not too soon to provide by every possible means that as few as possible be without a little portion of land. The small landholders are the most precious part of a state.” Indeed, the concept is still popular today, even on the right. James Poulos writes, “Without an ownership society, where citizens are prudent stewards of broadly distributed private property, freedom tends to become what it was in revolutionary France — an abstract ideal that can easily arouse destructive political feelings that know no bounds.” But new data suggests America may no longer be such a society, and that has worrying implications for democracy.

The idea of a property-owning democracy is no longer the reality in the United States. Edward Wolff finds that the wealthiest 10 percent own 90.9 percent of all stocks and mutual funds, 94.3 percent of financial securities but only 26.5 percent of the debt. For the middle class, their home makes up 62.5 percent of their limited wealth. (The bottom 40 percent have negative wealth.) The Gini coefficient for net worth has increased from 0.803 in 1962 to 0.871 in 2013. (By way of comparison: A Gini coefficient of 1 means that 1 person owns all of the wealth.) As the chart below shows, financial instruments and wealth are far more unequally distributed than income. As wealth and stock ownership has become more concentrated, good jobs that lead to a middle class lifestyle are increasingly eroded. Unfortunately, not enough people seem to be noticing.

Indeed, the Wall Street Journal recently reported that “apps do your chores” -- but the unfortunate reality is that workers, not “apps,” are doing those chores. The workers are called “contractors,” instead of employees, meaning that they don’t get the protections full-time employees do. And examples of exploitation are piling up.

A startup called CrowdFlower Inc. -- which, according to WSJ "breaks down digital jobs, such as data entry, into tiny tasks performed by millions of workers" -- was recently sued for paying some of those workers between $2 and $3 an hour. Industry leader Uber, meanwhile, has been criticized for exaggerating the wages of its contractors.  This practice is becoming widespread. A recent study finds that 53 million Americans are doing some sort of freelancing work. Of those, 40 percent are full-time independent contractors, meaning they have no other source of income.

The rich are driven by two main desires: First, to make sure they have more money; and, second, that someone else does the work. There is literally no job the rich are not lazy enough to outsource. Because they cannot figure out the location of their post office, they need “Shyp.” With “Luxe,” they can get a person to park their car for them. And with “Saucey,” they can save themselves a trip to the liquor store. In a recent article for  The New Yorker, Patricia Marx describes some of the more absurd tasks that were included on TaskRabbit, including “Lego sorting,” locating “a reptile handler who is in legal possession of a rattlesnake” and finding a fake wedding ring that looks just like a real one.

It is not of insignificant concern that the rich may cease to be capable of performing the basic tasks necessary in the modern economy. The result is something like the dystopia described in the recent science-fiction film "In Time," except that the rich elongate their lives by making the poor do their mundane tasks.

To get an assignment, an aspiring Rabbit offers to do the chore for less money than he or she thinks other prospective Rabbits are bidding. That’s what makes it a metaphor for the new economy, a dystopia where regular careers are vanishing, every worker is a freelancer, every labor transaction is a one-night stand, and we collude with one another to cut our wages.

Together these trends should be worrying: The vast majority of Americans own no assets, but are instead laden with debt. The social safety net is being shredded by plutocrats and their political henchmen. Conservatives say workers should instead get benefits from their (preferably privately owned) employers. But those companies are supporting workers less and less: Defined benefit pensions are a thing of the past, and even basic retirement plans are in decline. And that’s just for those who are lucky enough to have jobs with benefits. Many workers are misclassified, or are never employees to begin with, meaning they must manage for retirement and health insurance without all the benefits the government funnels through the employee-employer relationship.

As Matt Bruenig notes, in the United States,

That is, government has funneled important social benefits through corporations. This not only makes a corporate job more cushy than otherwise, it also makes freelance work more precarious. Christopher Mims notes that, “Uber isn’t the Uber for rides — it’s the Uber for low-wage jobs.” A large portion of Americans now have two choices: Become servants to the rich for minimal wages, or starve to death. The idea that low-wage work is merely a short-term part of the rung towards a better life is also largely illusory: Upward mobility has been destroyed.

America has fallen into neo-feudalism: A wealthy capital-owning class exists behind a servile class with no assets, and only a life of drudgery ahead of them. The master-servant relationship will only further degrade social trust and civic values. Americans can’t see themselves as equals in the political sphere when large portions are consigned to wait upon the whims of new aristocracy. Conservative politics relies on the middle class making a devil’s bargain, believing they have more in common with the rich than the poor. It won’t be long before that facade crumbles.