The utterly unnecessary comeback of "Entourage": Hollywood douchebag satire, minus the satire

Your "favorite" posse of Queens-to-Hollywood dudebros return, with the usual pack of hotties and pointless cameos 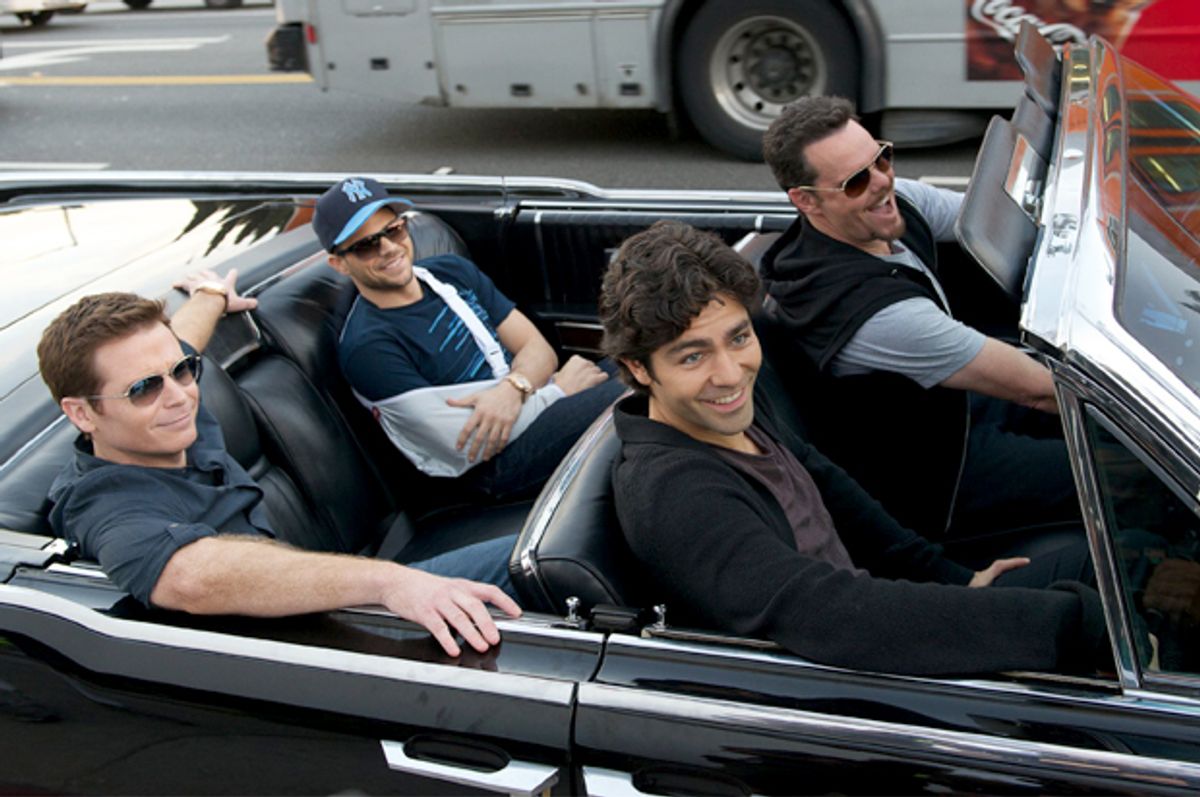 So I actually do get how “Entourage” works and what conceptual niche it fills, despite the fact that I hardly ever watched the HBO series and basically could not stand it. There’s a certain scurrilous honor, or at least honesty, in creating a Hollywood satire that basically isn’t satire at all, and that appeals to our lust for tawdry glamour with almost no sense of shame. There’s a certain moralism at work in most pop-culture depictions of Hollywood, from Preston Sturges’ “Sullivan’s Travels” through the Coens’ “Barton Fink” to such contemporary examples as Showtime’s “Ray Donovan” and David Cronenberg’s “Maps to the Stars.” Doug Ellin, the creator of “Entourage,” has transcended that paradigm in almost Nietzschean fashion: Why pretend that the decadent-empire excess of Hollywood is some kind of moral problem, when in fact it represents our only conception of Paradise?

Four years after Ellin’s show ceased its transmissions into your living room, he has reunited pretty-boy movie star Vincent Chase (Adrian Grenier) and his posse of Queens homeboys and brought them to the big screen. Everything about this motion picture is entirely gratuitous, from its opening scene of bikini-clad hotties dancing aboard an Ibiza-parked yacht onward, but that too is the point. Viewed strictly in terms of conception and execution (i.e., what is this trying to accomplish, and how well does it do so?) Ellin’s new “Entourage” film is highly effective. I’d still probably rather see these characters dumped into the middle of the Ukrainian conflict, or eaten by Godzilla. But that’s old-fashioned morality talking, and anyway I have a hunch that Turtle (Jerry Ferrara) and Vinnie’s hapless brother Johnny Drama (Kevin Dillon) would survive almost anything.

There have been changes in the world of “Entourage,” all of them pretty implausible but not any more so than the whole damn thing. Vincent longs to direct now that he’s on the north side of 30, God help us all. Ari Gold, the lovably monstrous agent played by Jeremy Piven who is not so secretly the main character or at least central pivot of the “Entourage” universe, has unretired, gone into couples therapy with his wife (Perrey Reeves) and become a studio head. Armed with investment capital supplied by a West Texas zillionaire played by Billy Bob Thornton – an especially lazy stereotype, even for “Entourage” – Ari bankrolls Vinnie’s dream project. Which is, I kid you not, a $100 million-plus, CGI-dominated adaptation of the Jekyll and Hyde story, starring Vinnie as a dark and mysterious nightclub DJ. All the textual evidence suggests we are supposed to think this is a completely awesome idea.

Are there comic complications along the way to the culmination of this masterpiece? Why yes, there are – how did you guess? As ever, Vinnie is little more than a supporting character, whose basic niceness and coolness are never in question but also aren’t that interesting. He is the reason all the other dudes are taking this hilarious ride, of course, but it’s their absurd and irresistible averageness that is supposed to win our hearts. This may be more challenging (for some viewers) in the case of the grossly misogynistic Johnny, who is full of arcane wisdom on the subjects of sex and romance. I know I said earlier that Ellin (who both wrote and directed this movie) rises above the restraints of conventional morality, but that’s hardly ever true of anyone and it isn’t quite true here. His treatment of Johnny, who is humiliated in a TMZ sex scandal, steers Turtle disastrously wrong in his budding relationship with MMA fighter Ronda Rousey (as herself) and is then redeemed as a man, an actor, an artist and a friend, is straight out of Tolstoy or Dickens. Well, I mean, if they had been complete morons and apologists for everything stupid and bad.

Eric or “E” (Kevin Connolly), the onetime pizza-slinger turned Vinnie’s manager and producer, remains to some degree the focus of audience identification, the normal and likable guy set adrift on the alien planet of Hollywood. But no, that’s not even true, so forget it. E has a pregnant ex-girlfriend he still loves (Emmanuelle Chriqui) and various Hollywood strumpets eager to pounce on his junk, but that subplot feels kinda obligatory when the real story is more about Ari’s outrageous but somehow honorable warrior code and the endless list of cameo appearances, from Liam Neeson and Mark Wahlberg to Tom Brady and Pharrell Williams and Andrew Dice Clay and a dozen or so other people I can’t even remember. Armie Hammer wants to beat Johnny’s ass. Jessica Alba and Warren Buffett want to beat Ari’s ass. Almost every tiny part is occupied by a name actor: Oh, there’s Judy Greer playing somebody’s assistant and Martin Landau playing somebody’s dad and George Takei playing a famous Asian-American gay nerd.

Did this overstuffed quality of “Entourage,” its KFC Double Down too-much-is-not-enough-ness, ultimately work on me? Absolutely not. I deny ever laughing at Ari’s endless manipulations or rooting for Turtle to go one-on-one with the MMA chick or feeling in any way invested in the outcome of E’s romantic entanglements. Because not only would that reveal me as not morally superior to Ellin or his idiotic characters, it would make me even more pissed off about Johnny, whose rebirth and redemption represents the dudebro-pandering of the “Entourage” universe at its most transparent and shameless. I’m really sorry that I lapsed into brain-dead enjoyment of this movie, partway between Ibiza and the Golden Globes; I promise to re-educate myself with a documentary about Uzbek wheat production ASAP. By the time we got to the insipid and magical happy ending, which would give Nietzsche’s amoral ghost the dry heaves, I really hated it again.