What about the Duggar girls? Michelle and Jim Bob's "dark time" all but ignores their daughters

They weren't "giving up" on Josh -- but what about the rest of the family? 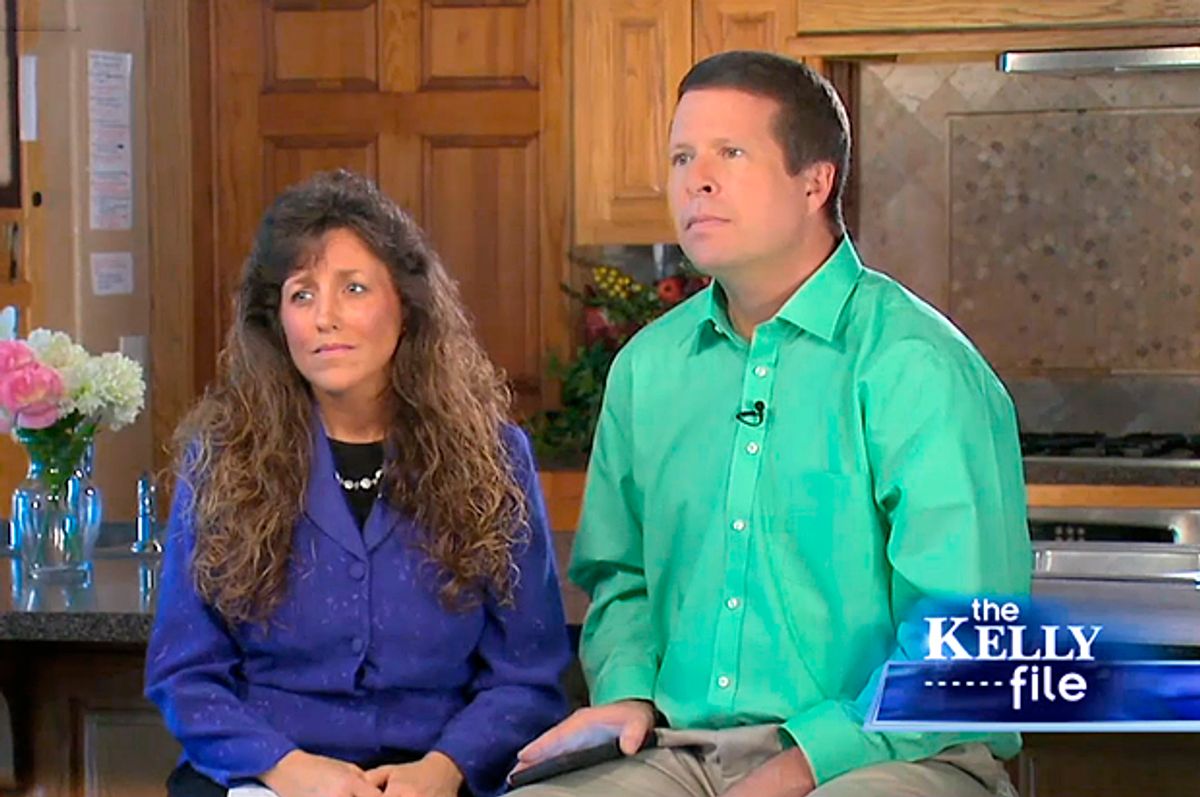 For a relatively brief conversation, there was so much baffling and infurating material in Jim Bob and Michelle Duggar's Wednesday interview with Megyn Kelly that by Thursday morning, thousands and thousands of words worth of tweets and think pieces had already been wrung out of the event. So let's talk instead about what they didn't say.

In their first post-scandal interview, the Duggar parents sat down with Fox News to discuss what Kelly helpfully referred to as the "illegally released police report" that revealed that their oldest son had forcibly touched at least five girls between 2002 and 2003 — including his sisters and including one of a "single digit" age. It was, as Jim Bob said, "one of the most darkest times that our family has ever gone through." They described how Josh confessed to them, saying he "had just turned 14 and he said he had improperly touched some of our daughters…. He said he was just curious about girls and he had gone in and basically touched them over their clothes while they were sleeping. They didn't even know he had done it."

They said that "first we tried to deal with this in house, as parents. We talked to him. We put all kinds of punishments on him. We watched him like all the time. I took him to work with me. And we just poured our life into it."

They later, when pressed by Kelly, said that "He was still a kid. He was still a juvenile. He wasn’t an adult," and added, "This was not rape or anything like that. This was touching someone over their clothes." And they said that when they spoke to their daughters, the girls "didn't know that anything had happened because they were asleep" and that "we also talked to our daughters and reminded them about wrong and right touch and about if anybody ever touched you in a wrong way, for you to come and tell your mom immediately."

But how are you supposed to know what "wrong and right" are if you're not having conversations about it? And where, in any of this, is even a glimmer of an indication that the Duggar family's pain isn't just for what happened to Josh, but what happened to those girls?

Not long ago, I watched as close friends had to deal with the horror of learning that their teenaged son had been verbally sexually harassing a younger female classmate. I saw firsthand what it's like to grapple with the sometimes opposing forces of parental compassion and the knowledge that your own child has done something terrible to another person. And as a mother, I can fully understand why the Duggars would say, as they told Kelly, "We weren't going to give up on Josh."

The Duggars — who are so concerned about trans women that they "doubt that Fayetteville parents would stand for a law that would endanger their daughters or allow them to be traumatized by a man joining them in their private space" —  seem not to have acknowledged, either to Kelly or to, apparently, their children, that kids and certainly teenagers are sexually curious and that curiosity in and of itself is not automatically "sin." Last year, Lena Dunham took a tremendous amount of outrage for her admissions of her early explorations, including bribing her sister for kisses. And this past spring, free range parenting advocate Lenore Skenazy wrote about hosting a brunch for "my friends on the sex offender registry" — including a man named, like the eldest Duggar, Josh. She wrote that "at 12, he played doctor with his sister. His sister told their mom, their mom called a counseling center to ask what to do, the counselor was a 'mandated reporter,' and Josh ended up in juvenile prison for 3 1/2 years. His 'therapy' there consisted of sickening things like acting out sex acts for the therapist. Josh was still a virgin! Ever since he got out, he has been on the registry, even though his sister has long forgiven him."

And in the second part of the Kelly interview, which airs later this week, Josh's sister Jessa reportedly says, "I do want to speak up in his defense against people who are calling him a child molester or a pedophile or a rapist, some people are saying. I'm like, that is so overboard and a lie really. I mean, people get mad at me for saying that, but I can say this because I was one of the victims."

It's safe to say that there are ways of dealing with sexually inappropriate juvenile behavior that are not permanently traumatic for the victims — and the perpetrators. But that can't happen when parents like the Duggars talk about what their son did in terms of "unwise choices" and minimize what happened to the five girls involved. And it doesn't happen when you don't get angry on your children's behalf, and you don't come out say that girls are not there for the touching, conscious or not.