With "Spy," Melissa McCarthy gets the solidly wacky buddy comedy she deserves

The star's strange chemistry with Rose Byrne, Jude Law and Jason Statham pays off in a goofball CIA spoof 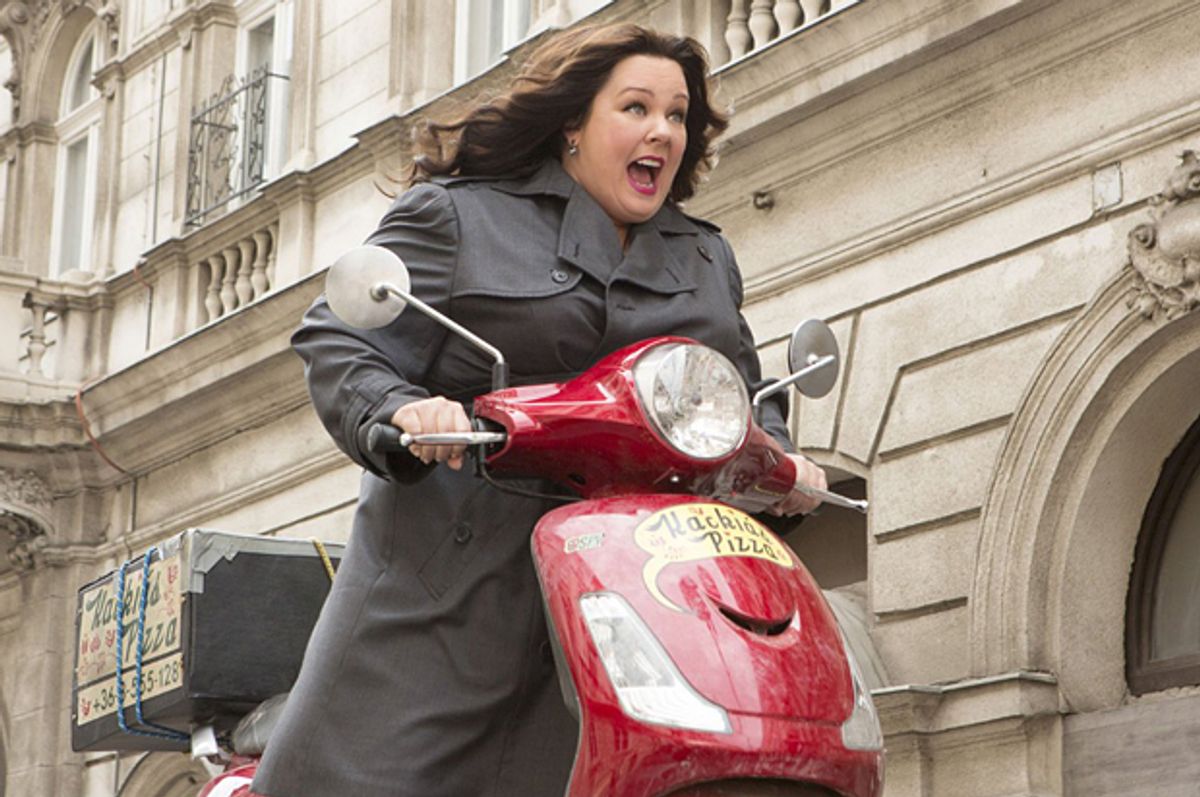 With writer-director Paul Feig’s glossy, globetrotting spoof “Spy,” we reach a new and more comfortable middle zone in the strange, double-edged phenomenon of Melissa McCarthy’s movie-star career. McCarthy is keenly aware that some people will always view her as a joke – a brash, trash-talking but essentially sexless person who resembles Santa Claus’ wife (as Jason Statham’s hard-boiled spook character observes in this movie). This may be more than balanced out, to be sure, by those in the audience who identify with her and root for her joyously. Personally, I’ve often found her comic persona overly aggressive, cranked to 11 too much of the time, but that’s a different question from her cultural significance. McCarthy's seemingly unlikely rise to stardom is more important than any of her individual projects; it belongs to a much broader cultural pattern of tolerance and acceptance that encompasses same-sex matrimony and “Modern Family” and Caitlyn Jenner and a whole bunch of other stuff.

McCarthy’s success has been largely based on her skill in addressing both sides of the audience equation at once. We’ve all noticed that she does not physically resemble any previous Hollywood star; her comedy always acknowledges that incongruity and she's more than willing to make jokes at her own expense. But McCarthy’s triumph, within the movie or at the box office or in the culture, proclaims repeatedly and ferociously that she’s not an object of pity or pathos (and not a “sad Bulgarian clown,” as Rose Byrne, the ice-queen villainess of “Spy,” describes her). This movie is literally littered with the corpses of those who take McCarthy’s character lightly, or treat her as a punch line.

In the wake of the surprise Feig-McCarthy hit “The Heat” from two summers ago, they’ve gotten a bunch more money, ritzier locations and a cast loaded with stars this time around. “Spy” is still an extremely silly movie with no claims of realism, but it has quite a few decent giggles along with delightful supporting turns from Statham, Jude Law, Allison Janney and especially Byrne, as the skinny, uber-bitch comic foil to McCarthy’s implausible spy heroine. For my money, the complicated intersection between jokes at McCarthy’s expense – her undercover identities often seem to involve multiple cats, egregious holiday sweaters and elaborate crafting hobbies – and jokes at the expense of those who misjudge or underestimate her is handled far more adroitly here than in “The Heat.” It helps that this movie doesn’t think police brutality is hilarious, and that it lacks the nails-on-chalkboard comedy stylings of Sandra Bullock.

McCarthy plays Susan Cooper, a desk-bound CIA agent who spends most of her time in the agency’s vermin-infested basement – somehow the idea that Langley has recurring bat and mouse problems keeps on being funny – serving as the high-tech eyes and ears of glamorous field agent Bradley Fine (Law), on whom she has an ill-disguised and hopeless crush. Fine is a delicately managed caricature, a highly competent daredevil just slightly too aware how good he looks in a tailored suit and how well he speaks French to sommeliers. Both Law and Statham, in fact, are playing exaggerated version of the guys they’ve played many times: The latter is very funny as an oafish, belligerent agent constantly declaiming about all the outrageous, Gordon Liddy-style things he’s done, which include limb-reattachment surgery (on himself), parachuting off a skyscraper using only a raincoat and appearing before Congress as Barack Obama. (“In blackface?” asks Susan. “That’s not appropriate.”)

When her beloved Fine disappears into the clutches of Rayna Boyanov (Byrne), a nefarious Bulgarian black marketeer with an English finishing-school accent and an impeccable wardrobe, Susan is of course sent into the field herself. Because no one who looks like her could ever be a kickass international spy, ha ha, and the bad guys will never suspect the weird-looking lady with the Midwestern accent and the tent-like garments. Well, at least they won’t until Susan saves Paris from a major terrorist bombing, and intervenes not once but twice to stop assassination attempts against the mean but undeniably beautiful Rayna. Somewhere along the way to becoming a full-on international badass, Susan ditches the crocheted tops for leather nightclub gear, and goes from saying “Jeepers Christmas” and “son of a beesting” to cursing like a whorehouse rat.

It takes a while for the odd chemistry between Byrne and McCarthy to warm up – especially since the idea is that they view each other with utter contempt – but in many ways the relationship between the skinny, bitchy, ultra-chic terrorism-enabler and the regular-gal American heroine is at the heart of “Spy.” Well, there’s also Susan’s dorky English sidekick Nancy (Miranda Hart) -- and why are all these British people in the CIA? Don’t they have their own rights-subverting spook agency to run? – who shows up at inopportune moments, cannot shut up and literally climbs on top of “50 Cent Piece,” as she calls him, when that person gratuitously appears late in the film. A little bit of Nancy goes a long way, whereas I wanted more of the scorn, ridicule and begrudging respect between Susan and Rayna.

But even in a story this preposterous, Feig can’t go too far in making a Bulgarian arms dealer who’s shopping a suitcase nuke to America’s enemies into Melissa McCarthy’s BFF. We have to get something approaching a patriotic happy ending that doesn’t kill off anyone important and leaves the door open for sequels. I was dreading the prospect of more “Heat” movies with more brittle gags about Bullock and McCarthy’s relative attractiveness, but another movie in this vein, especially if the supporting cast all return, would be entirely painless. McCarthy has much more to discover about herself as an actor and an avatar and a cultural signifier, and I hope she doesn’t get trapped by one role, one genre or one franchise. But her campaign of conquest is going well.