There is no justice: What cops and courts get wrong about the human brain 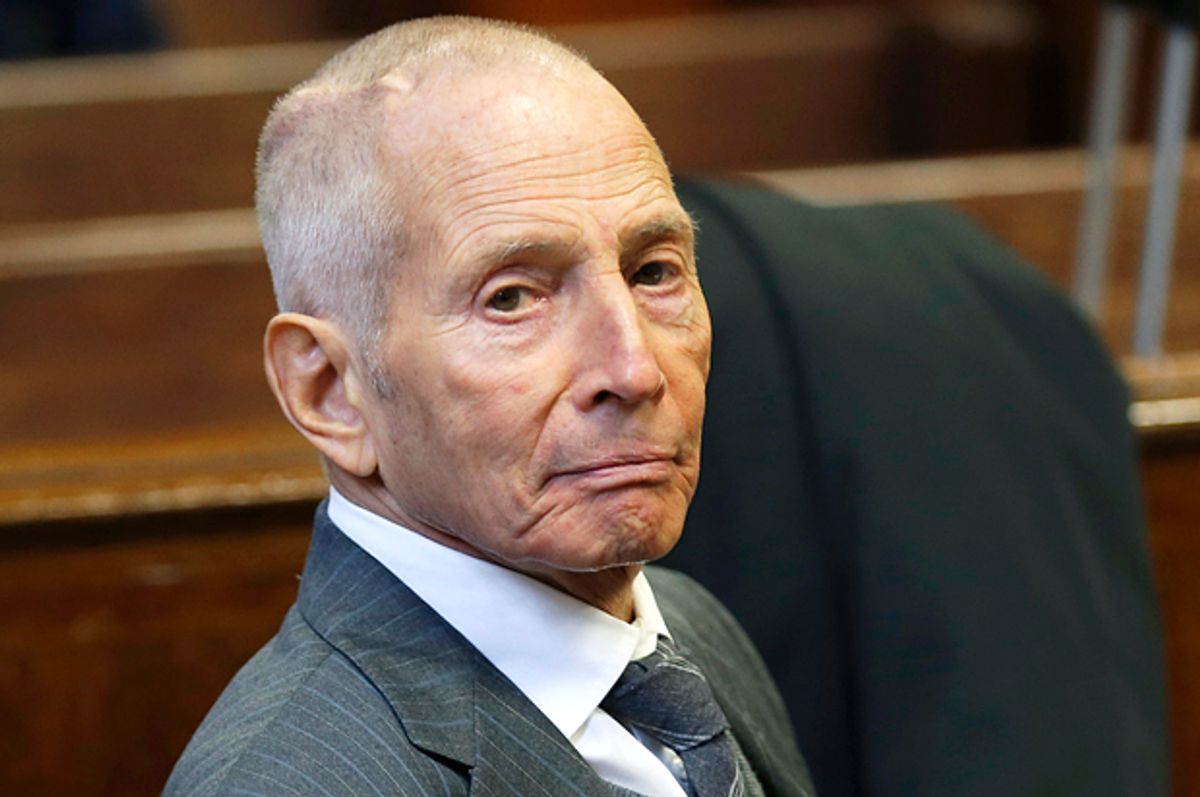 Most informed Americans recognize — whatever our justice system’s claims to the contrary — that people who run into trouble with the law often face unfair treatment due to their race, class or gender. Prejudice can also work in a defendant’s favor, as millions of television viewers witnessed earlier this year while watching the HBO documentary “The Jinx.” They saw Robert Durst beat a murder rap in Galveston, Texas, because his attorneys succeeded at playing on the jury’s regional and gender biases. They portrayed the millionaire Durst as the persecuted victim of Westchester County DA Jeanine Pirro, a “politically ambitious woman” from the East Coast.

So we’re used to the idea that some accused criminals get a fairer shake than others. But did you know that, should you come up for parole, you’ll suffer a disadvantage if your hearing is scheduled before the judge’s lunch break or near the end of the day? Or that male jurors are more likely to vote to convict a woman if she’s overweight? Or that your testimony is more likely to be considered trustworthy if you have brown eyes and a round face? Or that the gender-based civil-rights suit you filed against your employer is more likely to be decided in your favor if the judge has a daughter? Most random of all, it also seems that a judge’s decision on what length of sentence to impose may be unconsciously influenced by numerical “cues” such as overhearing someone mention an entirely unrelated number or even rolling a set of dice. There seems to be no end to the biases that can land an innocent person in jail or debt.

Our understanding of the neuroscience of cognition — how much of our behavior has unconscious origins for which we later make up rational excuses, how powerfully we are affected by extraneous stimuli, how we act preferentially while convinced that we’re being scrupulously fair — has grown exponentially over the past 25 years. However, we still operate a criminal justice system that treats everything we do as the end result of reasoned, self-aware thought. To convince us of how misguided that is, a law professor, Adam Benforado, has written “Unfair: The New Science of Criminal Injustice.” By the time you get to the end of it you might be inclined to throw in the towel and advocate a return to the ancient Viking custom of weregild.

Benforado, who teaches a course in law and the mind sciences at Drexel University, would not want that. But his recommendations for how to fix the myriad baked-in discriminations in our legal system are so radical that he does need an entire book full of shocking examples to build up to them. Fortunately for him, America’s criminal-justice history has plenty on offer.

Take the case of Juan Rivera, 20, who was convicted of raping and killing an 11-year-old girl in 1992, a conviction upheld on two appeals, even though the second appeal hinged on new evidence: DNA proving that the semen found on the victim was from another man. Rivera had an alibi and no other forensic evidence linked him to the crime. What the prosecution did have was a signed confession, later recanted. Eventually Rivera’s conviction was vacated by a judge, but not before he’d spent 20 years in prison for a crime he didn’t commit, and not before the real killer, still at large, struck again; the same DNA was matched to a second murder.

False confessions are, according to Benforado, “the leading contributors to wrongful homicide convictions, present in over 60 percent of the known DNA murder-exoneration cases in the United States.” Another major cause of miscarriages of justice are faulty eyewitness identifications. Prosecutors adore the drama of having a victim or other witness point to the accused in court, but Benforado dismisses this sort of move as a “farce” that ought to be banned.

Eyewitnesses are notoriously inaccurate, and to illustrate this point, the author offers the case of John Jerome White, who was identified by an elderly woman as the man who had broken into her house and robbed, beaten and raped her. She picked him out of a photo array and then later out of a live lineup. Yet the DNA evidence later revealed she was wrong, and that’s not all: By coincidence, the man who had in fact assaulted her had been enlisted as “filler” for the lineup. She actually passed over the real rapist to point to an innocent guy. Eyewitnesses finger the wrong person more than 30 percent of the time, and Benforado asks, “Would we as a society tolerate the sale of a car whose brake lights malfunctioned on every third trip, or a hospital that handed out the wrong medicine to every third patient?” The consequences are as grave: White spent 22 years in prison.

False confessions and bogus eyewitness IDs are just the two most glaring causes of such miscarriages of justice. Benforado lines them up: police bias, prosecutorial misconduct, unscrupulous trial consultants, purchasable expert witnesses, easily manipulated juries, a public with far too much confidence in its own snap judgements, prisons that take minor offenders and transform them into monsters. He sees all of these plagues as rooted in profound misunderstandings of human behavior and the mind.

And he’s right, at least when it comes to our refusal to acknowledge how easily any of us can be influenced by others. False confessions, produced by a police questioning protocol knowing as the Reid Technique of Interviewing and Interrogation, result when vulnerable suspects (the young, the elderly and the mentally disabled) are subjected to unbearable pressure from investigators. The investigators typically have become wedded to one narrative about a crime and routinely ignore contrary evidence. Eyewitnesses can be manipulated in much the same way, picking up on subtle and/or unconscious cues from detectives and delivering what they sense is expected of them. This shaping of the evidence doesn’t have to be intentional on the detectives’ part, either; most often, it’s not.

Human beings are exquisitely suggestible, but we don’t want to admit it. We don’t want to face the fact that our memories aren’t reliable and can be fantastically reshaped by outside forces. (In one study, for example, over half the respondents, after being shown doctored photographs, reported memories of a nonexistent hot air balloon trip taken during their childhoods.) We want to believe that we know better than to judge others by the color of their skin or the prettiness of their faces. We may even have examined our souls on these issues and vowed to do better. But that’s easier said than done. We aren’t even aware of most of the biases that shape our understanding of the world.

We also like to think that our response to crime is dispassionate and objective, but scratch the surface and you’ll find a lot of vindictiveness. Benforado himself helped construct a clever experiment in which subjects were asked about how kindly a shark should be destroyed after it had attacked and killed two different hypothetical victims: a little girl and a middle-aged pedophile. The “execution” of this animal would obviously have no deterrent effect on other sharks, yet participants still opted to provide less painkiller to the beast that had killed the man than to the one that had killed the child. “People,” writes Benforado, “are driven by retribution to punish attacking sharks … in ways that are not significantly different from how they are driven to punish human offenders guilty of comparable misdeeds.”

Our desire to make criminals suffer — whether by long sentences or harsh prison conditions — is, however, self-destructive. Most of these wrongdoers will eventually be released, far more dangerous than before they went in. Our punitive urges, while darkly pleasurable, often fail to take into account the mental and physical illnesses and histories of abuse that cause people to become violent or destructive in the first place. We want to believe that those who do evil things do them intentionally and delight in their malevolence, but this is very rarely the case.

“The main enemy of justice,” Benforado writes, “does not lie in the corrupt dispositions of a few bigoted cops, stupid jurors or egotistical judges. It is found within the mind of each of us.” He takes seriously, however, our claims that we want a criminal justice system that is as fair as possible and a penal system that improves our society instead of just warehousing huge swathes of the population we deem to be inherently dangerous. And if we do mean what we say, then Benforado has some recommendations.

He wants to eliminate the adversarial model of American jurisprudence entirely, arguing that it is expensive and that it fosters corruption by encouraging lawyers to think in terms of “winning” rather than achieving justice. Above all, it promotes plea bargaining, which Benforado correctly blames for bullying innocent people into accepting convictions with short sentences in fear of otherwise being locked up for much longer. He also advocates a northern European approach to prisons, one that focuses on rehabilitation and in which “corrections officers are more like social workers.”

Much of what Benforado argues makes sense, but his own evidence tends to undermine it. Take, for example, his enthusiasm for “virtual” trials, in which all parties, from defendant to lawyers to witnesses, are presented to jurors on screen in the form of generic avatars, sort of like those Taiwanese animations on YouTube. This, he insists, will prevent biases against stigmatized groups (or blue-eyed, thin-faced people) and focus attention on what the parties actually say, rather than how they look or act when saying it. True, Benforado spends an early chapter utterly demolishing the common perception that we can intuit the truthfulness of a person by observing his or her demeanor while testifying, but even so it’s hard not to feel an instinctive resistance to the idea of replacing human beings before the court with virtual robots. Is it even possible to uproot the desire to see someone before you render judgement on him?

It also seems impossible to purge us of our desire to brand certain individuals as irredeemably and essentially evil and therefore worthy of earthly damnation in the form of being locked up in a hellish penitentiary. Yet the Norwegians have switched to a more humane and rehabilitation-oriented penal system, and it’s working out really well for them. If — as is commonly retorted when anyone suggests a less Old-Testament response to crime in the U.S. — we’re dealing with a portion of humanity that has somehow been born wicked, shouldn’t there be a lot of them in Norway, too? And if our criminals really are so much worse than the Norwegians’, isn't that telling us we’re doing something wrong?

Probably, but Americans do seem wedded to an ethos in which anger is equated with integrity and combativeness with virtue. Even our pop-culture heroes subscribe to this creed, all those two-fisted men of action who have no patience for persuasion, diplomacy and other contemptible forms of “politics.” We never feel more righteous than when we’re mad about something, even if it’s a trifle on the Internet. It just feels so good! It’s one thing for Benforado to ask us to give up the illusion of our own rationality and fairness, because Americans have always mistrusted impersonal eggheads. But take away our blood and thunder, and how will we even know who we are anymore?