The Duggar sisters stay on script while the family-values empire melts before their eyes: "We've never claimed to be the perfect family" 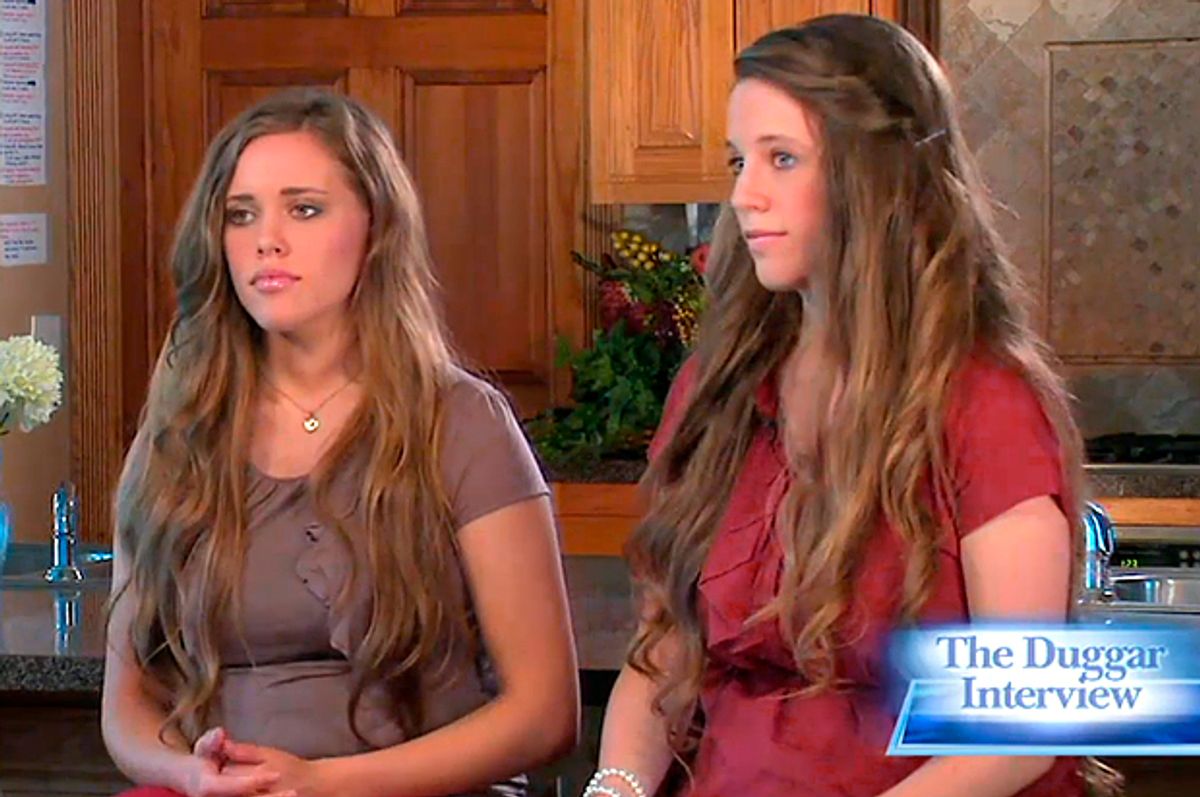 Duggar sisters Jessa Seewald and Jill Dillard have every right in the world to define their lives and experiences as they see fit. They have every right to decide how they feel about what their brother did to them — and a right to form their own opinions about how the media has handled the revelations that Josh Duggar, in his own words, "acted inexcusably" more than ten years ago. But watching the Duggars — first parents Jim Bob and Michelle, and then daughters Jessa and Jill — trot out their version of what happened all those years ago, and how they handled it, it's hard not to feel like we're watching a family more concerned about losing control of a narrative they've carefully crafted than of one trying to have an authentic conversation about what they call their "darkest times."

The Duggars had a nice little industry going for themselves for a while there, with their TLC franchise and subsequent book deals and speaking engagements and political clout wielding. Then last month, In Touch revealed the police reports of multiple incidents of forcibly touching at least five girls, including his sisters. In their conversation with Megyn Kelly last week, Jim Bob and Michelle Duggar simultaneously insisted they'd take appropriate measures to stop the behavior but downplayed the events, saying, "He was still a kid. He was still a juvenile. He wasn’t an adult. This was not rape or anything like that. This was touching someone over their clothes." And when on Friday it was sisters Jessa and Jill's turn, they dutifully echoed the sentiment.

"I do want to speak up in his defense against people who are calling him a child molester or a pedophile or a rapist some people are saying. That is so overboard and a lie really…. I was one of the victims so I can speak out," Jessa Duggar Seewald told Megyn Kelly. "In Josh's case, he was a boy, young boy in puberty, and a little too curious about girls and that got him into some trouble. And he made some bad choices, but really the extent of it was mild inappropriate touching on fully clothed victims. Most of it while girls were sleeping."

And Dillard added, "As a mother now, I look back and I think, you know, my parents did such an amazing job. For me, even when we went through the DHS investigation, they complimented my parents on what an amazing job they did through that process." The sisters spoke of their father explaining to them "difference between forgiveness and trust," and of coming to a rebuilding of that trust with their brother over time. And in the police report, you can read that "[redacted] had forgiven [redacted] and nothing had happened since."

The wounds of Josh's actions appear to have long ago healed for the women. Instead, their anger and mistrust today is directed at the press. Dillard says when she found out about the In Touch story, she thought, "They didn’t have the right to do this. We’re victims. They can’t do this to us…. There may be an agenda. I mean, I know that the tabloids that released it, you know, they’re used to exploiting women."

The sisters say that "We’ve never claimed to be a perfect family," and they are entitled to have private struggles and pains. But when you're someone like Jessa, who's compared abortion to the holocaust, or someone like mom Michelle, who's campaigned actively against rights for transgender individuals, or dad Jim Bob, who has asserted that "rape and incest represent heinous crimes and as such should be treated as capital crimes," you have set yourself on a certain morally judgmental plane. You can question the motives of the tabloids, you can assert your own peace with your past, but you don't get to play the victim card because the rest of the media is not your carefully controlled TV show, or because people are asking questions about the disconnect between your family's image and the behavior of its members.

And in all of their outrage, the four Duggars who have sat down for interviews have thus far failed to make a strong statement to other girls out there, and other families, about bodily autonomy or about how to appropriately handle a situation like the one they found themselves in. Instead, they're working a narrative of "It wasn't that bad and it was long ago and all is forgiven and the media is the real problem." And that's what makes it so sad and unconvincing. "We are not a perfect family," Jill says. "We are just a family." A family that until recently was a reality empire. A family no longer with a believable script.