Fashion-snarking Monica is not without its historical context, but it would be condescending to give her a pass now 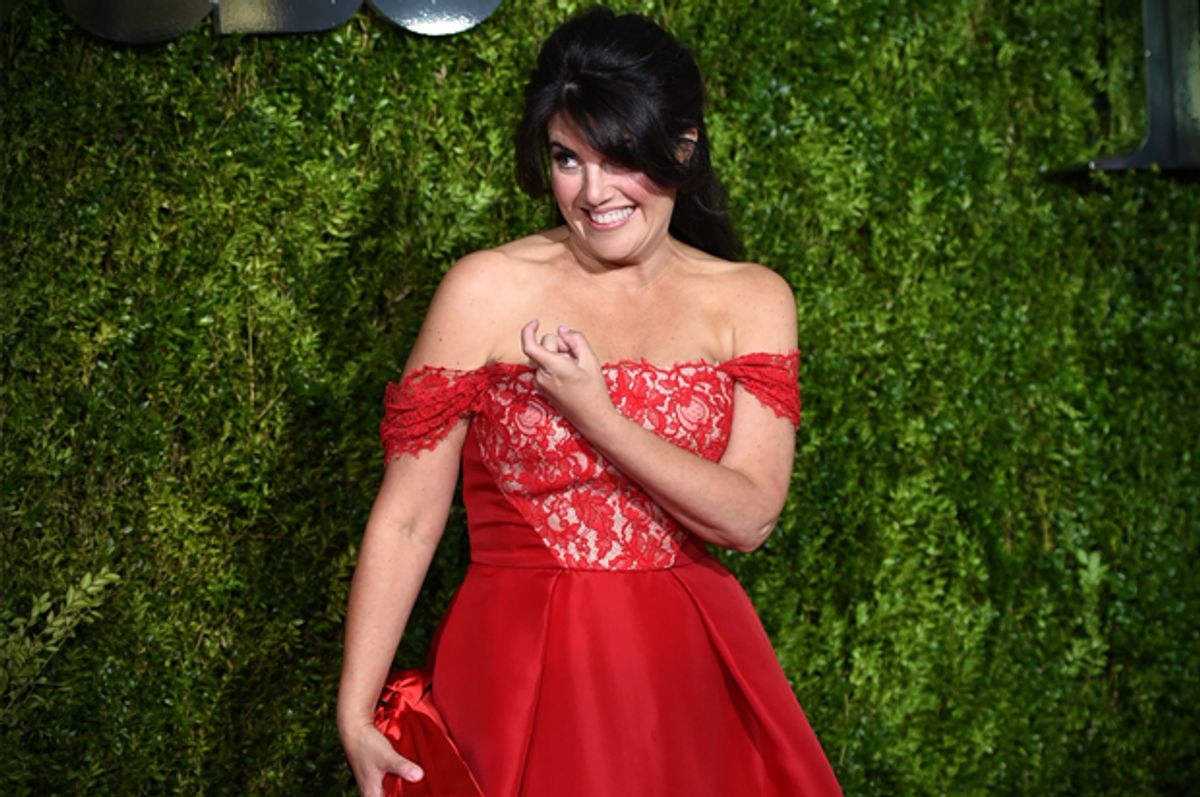 Monica Lewinsky wore a terrible dress to the Tonys. In fact, one might go so far as to call it the second worst dress she's ever chosen. And were she your garden variety television or movie star, she'd be entirely fair game for a warning from the fashion police. But she's not. And when someone who's endured a lot chooses to remain in the public the challenge becomes, how do you talk about him or her without becoming just another hater? How do you fairly criticize in a world that's so often so unfair?

Lewinsky's red ballerina length number with an off the shoulder lace top provoked easy criticism from venues with no scruples about her notorious sartorial past — or her recent campaign to put an end to public shaming. The Daily Mail called the ensemble "frumpy" while Yahoo's style editors noted, "For a woman her age (Lewinsky is in her 40s now), it reads just a bit too young. While the silhouette is lovely, the lace bodice, with white underlay, is a bit distracting. Also matching the red hot shade to her clutch was a slightly prom-y move." Inquisitr mused, "Monica Lewinsky chose a red prom-like dress for the Tony Awards for unknown reasons. Perhaps she really liked the dress, or she didn’t have too much to choose from." More charitably, though, Hello! said she looked "every bit the movie star." But I'll admit that when I saw her Tonys look, my thought process went along the lines of, "Oh no, girl, you can do better — but I'm not going to say anything because you have been through enough."

I had a similar reaction just last week, when I saw Caitlyn Jenner's big reveal on the cover of Vanity Fair. I thought she looked fantastic — within a certain narrow definition of feminine beauty, and taking into account that most 65 year-old trans women don't have the resources to mold themselves into their physical ideals that she does. And I felt a similar mix of emotions last fall, when Renee Zellweger appeared in public looking markedly changed in appearance — and coyly claiming simply that "I’m living a different, happy, more fulfilling life, and I’m thrilled that perhaps it shows."

Any commentary — even approving — about a woman's appearance is going to be fraught with the politics surrounding it. We have entire television franchises built around mocking how people dress, and have turned snarking into a social media leisure activity. Yet I believe that many of us don't want to be part of the "fat, white and hideous" chorus of snap judgment. We want to unreservedly applaud for those brave enough to put themselves out there — without resorting to hollow applause. But it doesn't exactly further the conversations about gender and size and aging and what it means to be female if we're just handing out "participant" medals to everybody for showing up. It doesn't move things along if we're afraid of being traitors to The Cause — whatever The Cause happens to be — by having a negative opinion. And the bottom line is that if you're on a red carpet or a magazine cover or the face of a brand's ad campaign, you are saying, "Look at me," and that invitation obliges us to look with both kindness and honesty.

I admire Monica Lewinsky's efforts to be a voice for those who've been bullied and harassed. I like that she is using her years of awful experience to champion those who are struggling, and to advocate for a more tolerant, compassionate Internet culture. I feel instinctively protective of her, knowing that she's allowed herself to be vulnerable in the face of unceasing judgment about her past. I also think that outfit was a fashion don't. It wasn't as bad as Ashley Tisdale's, but it was right up there. And difficult as it may be to practice sometimes, I think that when it comes to how we talk about women — how they look, how they dress — condescension is ultimately more toxic than criticism.