Many have been quick to dismiss or make excuses for the shocking video out of Texas. Here's the truth of the matter 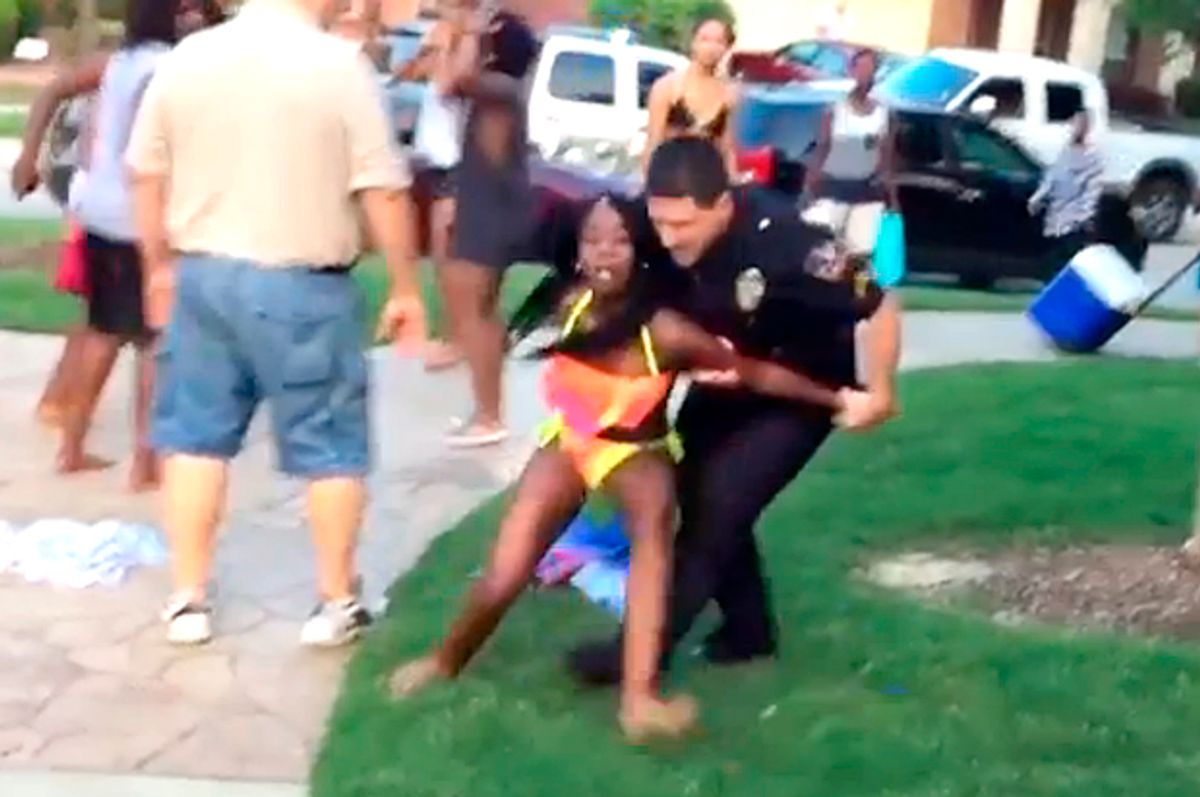 In just over two months, we will commemorate the 10th anniversary of Hurricane Katrina, a natural disaster that ravaged communities along the Gulf Coast. This tragedy was made infinitely worse not only by decades of governmental neglect and far-ranging poverty, but also by the fact that so many Black people could not swim.

That nearly 60 percent of Black people cannot swim is directly attributable to decades of segregated pool facilities in this country. While that problem ostensibly went away with the desegregation efforts of the mid-20th century, de facto segregation of pool facilities persists to this day, because community pools are now largely private amenities in suburban neighborhoods that many Black youth don’t have access to.

This is the backdrop of the troubling and traumatizing incident that occurred in McKinney, Texas, a suburb of Dallas, over the weekend, when 19-year-old Tatiana Rose threw a pool party and invited several friends to use the community pool in her neighborhood. Many of those friends were Black, and many of those Black friends also live in the neighborhood. At some point, as Tatiana says in a video interview, two white adult women began yelling at her and her friends to “go back where they came from,” “back to section 8 housing,” and calling them “black fuckers.” When a 14-year-old girl responded, the women further ridiculed her, prompting Tatiana to tell the adults that the girl was 14 and their comments were inappropriate. According to Tatiana’s account, the white women then approached her; one “hit her in the face” and the other began participating in the attack.

According to reports, multiple calls came into police. At least one call came from either Tatiana, her mother (who was present) or her friends, reporting that these white women had attacked the partygoers. Other calls came in from residents who reported that many Black children who were unauthorized to be there were there and fighting. Apparently, the party got larger and some children jumped over the fence to get to the party.

When the McKinney PD showed up, Officer David Eric Casebolt arrived on the scene out of control. He yelled and cursed at teenagers, who were unarmed, many of them wearing swimming trunks and bathing suits. He approached a 14-year-old girl and wrestled her to the ground as she cried and called for her mom. Even after she was seated, crying and clearly subdued, he grabbed her braids, demanded that she get on her face, and then kneeled on top of her where he remained for several minutes. It is unclear what this child did to elicit such ire, but what she did not do was verbally threaten the officer, wave a gun at him, or present a physical threat -- as she is, by the look of it, just around 100 pounds, and he is a fully grown man.

When her friends attempted to come to her aid, the officer drew his gun, and waved it at them wildly and haphazardly, prompting two other officers to come over and indicate that this was inappropriate behavior. The officer stopped pointing his gun, but took several more seconds of holding it, before finally placing it back in the holster.

He has been suspended. The two adult white women who started this confrontation by reportedly slapping Tatiana Rose in the face have not been arrested or charged. A young 14-year old girl is traumatized, and a community who rallied at the police department on Monday night is outraged.

Meanwhile, many residents of the community are thankful to the police for “keeping them safe,” as one sign reportedly posted at the pool the next day said. The rest of us are now forced to endure the deeply dishonest and irrational kind of conversation on race that proceeds from the mouth of far too many white folk after these kinds of incidents occur -- with stunning regularity, I might add.

Among more well-meaning interlocutors are those who keep pointing out that David Casebolt is a bad apple. “He has been suspended,” they say. What we know for sure is that a suspension is not a clear indicator that charges, the loss of a job, or a criminal conviction are forthcoming.

Moreover, people continue to deploy the "one bad apple spoils a bunch" analogy as though the predicate of the sentence is of no consequence. Spoils. The analogy is less about the singular bad apple and more about its multiplicative bad effects on those it keeps company with. I agree that David Casebolt was particularly out of control. I agree that the other officers saw that and got him to stop waving his gun. They did not keep him from kneeling on top of the girl or berating and intimidating the other youth. This means that in a scenario where multiple children were being unfairly treated, the presence of multiple officers did not offer them substantial protection in the face one officer becoming entirely rogue.

Those officers did not demand that their colleague take a breather while they got the situation under control. They let him go on and on, half-cocked and ridiculous. The material impact of that was a bunch of children feeling unsafe and traumatized by those sworn to protect them.

The 15-year-old white kid who recorded this incident on his smartphone made it clear that what he saw was a bunch of police mistreating his Black friends, while leaving him alone entirely. For the white people who need to hear it, yes, his presence indicates that “not all white people” are racist. Clearly his parents are doing a good job raising an anti-racist teen. But if the white people who need to hear such things hope to float their consciences to safety on the back of this one kid, the ride might be bumpy. Again we don’t combat racism just by raising our children to have anti-racist attitudes. We also have to confront the systematic residential segregation and privatization that makes pools inaccessible to children who don’t have the privilege of living in suburbs.

Few white people have stood up and called out the white adult women who harassed a fellow neighbor having a pool party with her friends, and with her mother’s permission. But many white people have watched the video and concluded that the officer’s treatment of the 14-year-old girl was justified. The gender dynamics in this moment are interesting. There is no universe in which a police officer would drag a young white girl in a two-piece bathing suit by her hair, demand she put her face on the ground, and then kneel for several minutes on top of her adolescent body. If such a thing occurred, it would elicit massive moral outrage on the part of white people (and Black people, too).

But Black girls are never deemed feminine enough for their sexual and adolescent vulnerability to register for white people. They are frequently viewed as aggressors by both police and regular citizens alike, even for doing very adolescent things like mouthing off to those in authority. This is the reason why education scholars suggest that Black girls are suspended from school six times as often as white girls, because even simple adolescent forms of testing boundaries are perceived as far more aggressive based on race.

And let me be clear: Citizens have the right to “mouth off” to police. We have the right to question how we are being treated, why we are being arrested, why we are even being approached. Far too many police deploy accusations of disturbing the peace or obstructing justice to quiet citizens who question them within legal bounds. As long as we don’t threaten or enact physical harm on police officers, we can “mouth off” all we want. We don’t have to be polite to police officers, and they clearly have very little interest in being polite to us. And for those who keep demanding that we act civilly, the point is, “incivility” is not a crime.

If it were, half of America’s police forces would be behind bars.

Moreover, the violent incivility of the white women who harassed and physically assaulted these teenagers who had every right to be there escapes notice. White women have been some of the worst perpetrators of racial aggression and racial indignity in this country, but their aggressions frequently escape notice, precisely because white womanhood and the need to protect it animates the core of so much white supremacist aggression toward Black people. The domestic sphere, much to the chagrin of my fellow feminists, has long been considered the sacred domain of white women. Many a Black man was lynched in service of protecting white women’s domestic sanctity and sexual virtue. Meanwhile, white women have been emboldened by such a system for centuries to police, demean and humiliate Black people, and Black women in particular, within domestic spaces.

But you won’t see white feminists contextualizing or calling out this long history of white female bullying of Black women with less social, political or economic power than them. They leave that work to Black feminists. Meanwhile, I hope that Black men begin to understand that they don’t have a monopoly on being violently mistreated by police. Black girls are brutalized, too.

And to continue to tell Black people -- as many white folks and respectable black folk on the social media threads I participated in have said -- that if these children “would have just done what the officers said, none of this would have happened,” is to be deeply invested in exercises of racial ignorance. Proper behavior has never, ever protected Black people from police.

Most of these children came to a pool party with an invite, got harassed and physically assaulted by white residents who didn’t want them to be there, and then mistreated by the police. The ones who didn’t have an invite came because perhaps it was a rare opportunity to get in a clean, safe swimming pool in the heat of a Texas summer. Good policing could have dealt with this matter sans violence and without incident.

But that didn’t happen here.

Instead, the police mistreated these teens (including those who had been invited) because they started by giving the white residents the benefit of the doubt, even though good credible evidence suggests that white racial aggression spurred this incident in the first place. But Black children and Black people are never given the benefit of the doubt. We are policed first, and only ever apologized to later, if at all.

White people in the aggregate value the “safety” of their private, segregated, residential spaces far more than they value a system of policing that protects and values all lives equally. It is clear that the anxiety that many white suburban residents feel about having their communities “overrun” by Black people feels far more “traumatizing” to them than having to stand idly by while a few teens get roughed up by the police. If the cost of making white people safe is more than a few Black communities being systematically traumatized and made always to feel unsafe, then so be it. The notion of white safety has its foundations in Indigenous, Black and Brown unsafety. Until white people begin to question the violent origins of such a concept, the police will continue in the name of “white safety” to go around terrorizing communities of color, mostly with impunity.