Taming the hybrid mutant she-beast: Lessons from the giant retro-mall of "Jurassic World"

How is a career woman like a wily mutant dinosaur? They both require the firm hand of Chris Pratt, for starters 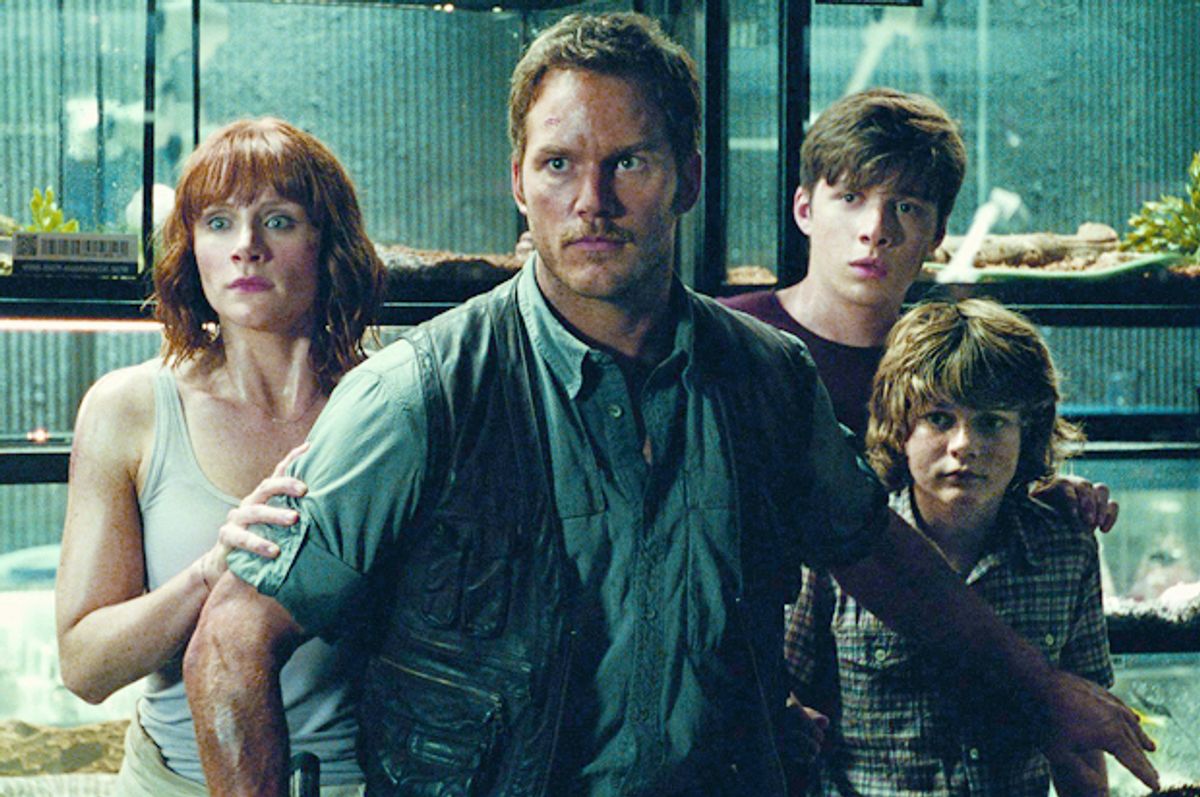 So I watched “Jurassic World” in one of those gigantic movie theaters in Times Square that resembles a vertical shopping mall or theme park. (In the case of this particular theater with its notoriously non-working escalators, a theme park in Bulgaria, circa 1997.) People liked it and even cheered at the end, which struck me as a symptom of movie-industry insider relief rather than genuine elation. Beyond a couple of big hits like “San Andreas” and the “Avengers” sequel, it looks like another downward-trending summer season for Hollywood. From the standpoint of all those reasonably intelligent and somewhat well-meaning people in Los Angeles County who are worried about mortgage payments and Audi leases and private-school tuition, “Jurassic World” unquestionably “delivers.” It feels like a hit; it offers a professionally crafted blend of blandness, predictability, watered-down cultural commentary and manufactured excitement.

But that was not exactly my point, just as the specific and individual qualities of the film called “Jurassic World,” which was directed by Hollywood neophyte Colin Trevorrow from a script that probably went through 16 drafts by 43 writers, and which stars Chris Pratt and Bryce Dallas Howard as denatured holograms of themselves, are not exactly the point. (I exaggerate, but not by much: There are five credited writers on this film, which almost always means that numerous others got paid off at some point and don’t get their names on the screen.) Indeed, I’m not sure what specific qualities “Jurassic World” could be said to possess, beyond a vague sense of its own importance that struck someone, somewhere along the way, as being witty or ironic, but comes across in the finished product as preening self-congratulation.

Oh yeah, along with a bunch of big-ass CGI dinosaurs unleashed through human arrogance, who stomp the craptastic insta-architecture of Jurassic World, the 21st-century reboot of the dino theme park Steven Spielberg first showed us in 1993, into smithereens. That happens in every movie associated with this franchise, I know – but the twist this time is that Dr. Henry Wu (BD Wong), the metrosexual Dr. Frankenstein first encountered in “Jurassic Park,” has genetically engineered a new hybrid dinosaur species, a highly intelligent super-predator built out of genetic fragments of T-rex, Cthulhu, the giant squid, James Bond’s original Aston Martin and Joan Rivers. OK, some of that is not actually spelled out in the film, but the secret sauce that makes the Badassosaurus or the Holycraposaurus or whatever it’s called so devious amounts to a massive non-spoiler, in that we keep thinking that something really amazing and horrible is about to be revealed, and it never is. New breakthroughs in Hollywood narrative formula!

Once again I have distracted myself from the main point, which is that “Jurassic World” takes place in a giant mall – the Costa Rican dino island is now a multiply-branded retail experience, with a Starbucks, a Brookstone, a Chili’s (unless it’s an Applebee’s or a TGI Friday) that blends dinosaur-themed margaritas and so on – feels, at the level of sensory input, like going to a giant mall and will be watched by most paying audiences in a giant mall. Is that, like, social criticism or just a self-authenticating feedback loop? I made a note to myself at one point that “Jurassic World” keeps channeling “Raiders of the Lost Ark” and “Dawn of the Dead,” or at least trying to. But the problems with the simulation go beyond the fact that the elements that made those films so much fun have been rendered meaningless through repetition over the last 30-odd years. At the technological level, of course Trevorrow has resources available that could not even be imagined in the ‘70s and ‘80s, but the influences have been strangely strained and drained: It’s like “Dawn of the Dead” minus the critique of consumerism, and “Raiders” minus the progressive gender politics.

Yes, that last part is a joke, a little bit: I’m not seriously arguing that the relationship between Harrison Ford and Karen Allen in “Raiders” marks some silver-screen ideal. But screenwriter Lawrence Kasdan deliberately tried to impart a period-appropriate flavor of screwball comedy to their repartee, which is one of the elements that makes that movie so beloved. What we get in “Jurassic World” between mechanically inclined, raptor-trainin’ he-man Owen (Pratt) and workaholic, high-heeled career lady Claire (Howard) is at best a pallid and double-plus-ungood imitation of that. We know for sure both actors can be immensely enjoyable in the right context: Pratt translated his “Parks and Recreation” comedy chops to the big screen perfectly well in “Guardians of the Galaxy” (and for that matter in “The Lego Movie”), and Howard’s deliciously awful villainess was among “The Help’s” saving graces. I felt as if I literally could not recognize them in this movie, jammed into action-movie templates like a pair of teenagers in rented prom tuxedos.

In fact, I would argue that “Jurassic World” acts out a parallel, which may be unconscious but is nonetheless profound, between Howard’s stressed-out, multitasking female executive (who calls the dinosaurs “assets” and has no time to spend with her teen and preteen nephews, who are visiting the park when all heck breaks out) and the genetically engineered female super-dino. No, hear me out; I swear this isn’t totally crazy. Everything about Claire, from her fussy hairdo, white sheath dress and heels to her officious, task-oriented demeanor, is presented as essentially unnatural. She is a product of our diseased society rather than the healthy natural urges embodied by Owen’s massive chest, his intuitive understanding of engines and his beastmaster relationship to the park’s doglike pack of velociraptors. She needs to be rumpled, tossed about and sexually dominated by Owen and she needs to reconnect to the beauty and rightness of the nuclear family – and if those impulses sometimes feel contradictory they ultimately point to the same destination of womanly perfection, am I right?

Almost all those things are also true of the she-demon dinosaur, whose manipulative intelligence and deceptive wiles hint at a secret connection with the human female that is never made explicit. She absolutely needs to be confronted and conquered by Owen – if sexual domination were involved this would be a much more interesting movie – and subdued to the natural order of things, which despite all the superficial changes of the last several thousand years apparently still involves hot but sensitive bearded dudes being in charge, as in the book of Genesis. As a laboratory-bred abomination who has eaten her only sibling, she has no nuclear family to whose embrace she may return. Such is the painful price of consciousness, and of rebellion; like Milton’s Satan she is the secret hero of her story (except that her story’s not very good). Better to reign in hell than serve in heaven, she says, or rather roars, and if those places don’t exist then at least let’s stomp the crap out of this Sunglass Hut.