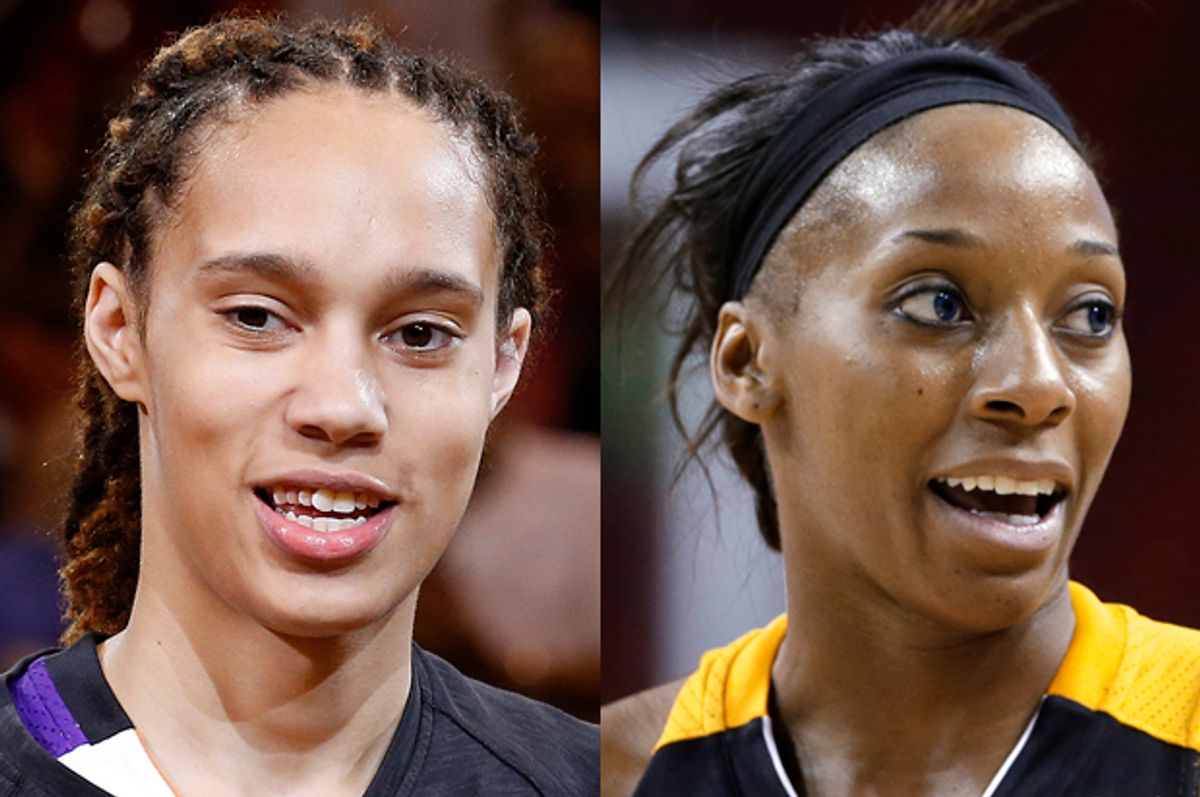 After filing for an annulment less than a month after getting married, WNBA superstar Brittney Griner told ESPN that she should never have married Glory Johnson, another WNBA star, and that she regretted her decision. "You know, sometimes you feel pressured into things, and I went along with it," Griner said. "And I know I shouldn't have. It was a huge mistake. I just knew it was a mistake."

Brittney Griner came out as a lesbian in April of 2013 and immediately became an eloquent spokesperson, for LGBTQ rights and against bullying. Upon announcing her engagement to Johnson on August 14, 2014, the two were followed closely than ever in the press and on social media. In April 2015, just a few days before their wedding, the two were arrested on charges of assault and disorderly conduct in Phoenix. After friends and family tried unsuccessfully to separate them, Johnson's sister called the police, claiming that she didn’t want anyone to get hurt.

The following week, Griner pleaded guilty to disorderly conduct charges and agreed to complete 26 weeks of domestic violence counseling, after which the charges will be dropped. In a statement, she said, “This will never happen again, and I take my relationship and my responsibility as a role model seriously.” Both women were suspended for seven games without pay by the WNBA following their arrest. The day after the arrest, the pair were back on social media and arrived on time for a previously scheduled wedding walk-through at a resort in Phoenix where they would eventually marry.

On June 4, 2015 Glory Johnson announced that she's pregnant. The following day, Griner filed for an annulment of the marriage, citing fraud and duress.

Last year, National Violence Against Women survey found that 21.5 percent of men and 35.4 percent of women living with a same-sex partner experienced intimate-partner physical violence in their lifetimes. This compared with 7.1 percent and 20.4 percent for men and women, respectively, who have a history of only opposite-sex cohabitation. These figures break down the dangerous myths that only straight women are victims of intimate partner violence, that men cannot be victims of intimate partner violence, and that women can’t also be perpetrators of violence.

Despite these significant numbers, LGBT people are less likely to seek support -- from the police, from health care practitioners and from their friends and family -- when experiencing intimate partner violence. In addition to dealing with the violence and abuse, queer and trans people have to negotiate whether it will be safe to come out, whether they will be believed, whether they will be valued at all.

There is, at once, both invisibility and hyper-visibility for those of us in the LGBTQ community. For those of us whose relationships don’t fit a heteronormative script, our communities and institutions fail us when we need support, when we need to be seen the most. Traditional, and woefully limited, perspectives about who can be a perpetrator and who’s more likely to be a victim do a great disservice to queer and trans people. Assumptions that perpetrators are male, more masculine, physically bigger/taller/heavier, and that women who are smaller, or more “feminine” (defined by a very narrow definition of femininity) are more likely to be victims, create lazy assessments of relationships where violence can be emotional and have severe psychological and social consequences (threatening to out someone, for example), as well as physical ones.

For the past 30 years, the mainstream domestic violence movement has centered its advocacy on “battered women.” Police officers, health care and social service professionals cannot possibly do their job to support survivors of intimate partner violence in LGBTQ relationships if they are trying to fit these relationships into the mold of heterosexual relationships. Add to that the history of violence, homophobia and transphobia in these institutions and it becomes easy to understand why LGBTQ violence is so heavily under-reported, particularly for LGBTQ people of color who face racism alongside homophobia and transphobia. A recipe for silence, stigma, and shame.

In many states there are no legal protections and very limited social support for LGBTQ people facing domestic or intimate partner violence. In addition to these structural challenges, there can be a fear of making the community look bad at a time when there is increased visibility of LGBTQ relationships and a growing movement for marriage equality.

We don’t know much about what really went on between Brittney Griner and Glory Johnson, but if we look closely, there are some noteworthy elements of the story:

Their very quick move to marriage, as though the institution of marriage might provide some cover or safeguard in the face of a clearly troubled relationship, for starters. This is important because many advocates for marriage equality are running a single-issue agenda. The issue of violence in the LGBT community is one issue that we ignore at the peril of our community and its well-being. Marriage brings with it social recognition, but it is not a balm for a relationship in trouble, as we see in this relationship as well as many heterosexual relationships.

The highly visible nature of their relationship, and each of their careers, clearly affected the way the media, their fans and possibly even those close to them reacted to the violence in the relationship. The tweets and social media posts after the incident in May reassured everyone that they were fine and that their relationship was a “work in progress.” Griner was sentenced to the domestic violence class, and Johnson was not -- also noteworthy when both of them have asserted that the violence was mutual.

We wish Griner and Johnson the best, and hope that they each get the support and healing they need, free from the intense scrutiny of the media. And their story shows us that we must do a better job of discussing and dealing with the twin challenges of hyper-visibility and invisibility of intimate partner violence in LGBTQ communities if we aim to offer the support that can prevent such violence and support survivors effectively.